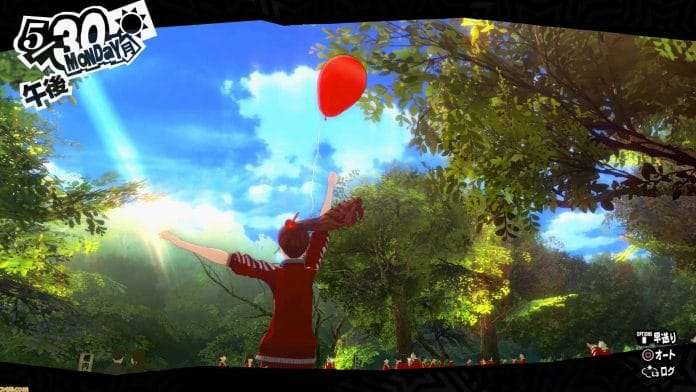 The Persona 5 Royal completion premiere event took place on August 30th to celebrate the completion of the game’s development, and it featured the game’s first public demo.

The event introduced a number of new elements in P5R, and Famitsu (writer: Atsushi Yashiro) and Dengeki have published an overview of the ones revealed during the event.

The media was able to play from the end of May after completing Madarame’s Palace until the beginning of June, during the social studies visit to the TV station. The time period was about a week in-game. The demo started with a new cleanup activity at Shujin Academy.

In the original game, there are not many positive memories associated with school events compared to the previous games in the series, in part due to the protagonist’s circumstances. Therefore, the writer is glad that there will be more events in school life with the Phantom Thieves. For this cleanup event you’re able to meet Haru Okumura (voice: Haruka Tomatsu), who did not have much screen time in the original Persona 5.

Check out the new characters!

Kasumi appears many times from the beginning of the story, but an opportunity to get closer to her happens during the “cleanup” school event on May 30, where she gets caught in trouble on her way to the activity.

After the cleaning activity ends, Kasumi approaches the protagonist with a smile. She thanks him for helping her out with the “sweaty middle-aged man” that morning, and she asks if he would like to go eat pork miso soup with her. The writer notes that he can’t find any reason in the universe to refuse an offer from a beautiful girl like that, so he replied with “Let’s eat.”

Kasumi has been enrolled at Shujin Academy as a special rhythmic gymnastics student, and she has considerable athletic ability. After being shown that ability, the protagonist agrees to give her advice in exchange for lessons in body movement.

She has high athleticism, instantly catching a balloon a child let go of.

Earnest and polite, with a strong sense of duty and justice, Kasumi is a beautiful girl with the image of an honor student. The existing character, Makoto Niijima (voice: Rina Satō) is also a remarkable honor student, but Kasumi’s atmosphere is much softer than Niijima’s. She is also a junior who respects her seniors.

She appears to be a playable character as one of the “Phantom Thieves of Hearts.” What kind of events will make them become allies? The writer notes that they can’t wait to play the main story.

One of Kasumi’s abilities achieved when advancing her confidant is “Tumbling,” which can avoid ambushes in Palaces. Additionally, for each rank you increase in Kasumi’s confidant, the protagonist’s maximum value of HP will increase.

Another new character of note is Maruki, who is assigned as Shujin Academy’s part-time school counselor after the incident in April. He invites the protagonist to help him with research, in exchange for teaching him about mental training.

He is a good listener and seems to be very popular with students, but he often shows an absentminded side during conversations with the main character. This kind of aloof character tends to come across as suspicious, but… what is his role as an additional character?

Maruki, with the aura of a “good person,” is an enthusiastic scholar and researcher, and the main character deepens his bond with him while helping his research.

After finishing a conversation with Maruki, his confidant went up to 3. A new ability was then acquired: “Hero Zone.” At the start of battle, the hero may get a charge or concentrate effect. In rank 2, you acquire the ability “Detox X,” which gives the protagonist a chance to immediately recover from negative status effects in battle.

Additionally, when Maruki’s confidant is engaged with, the maximum value of the main character’s SP increases due to “mental training” with him. The lack of SP was an issue for many players in the original version, so it could be said that this is a very nice luxury. 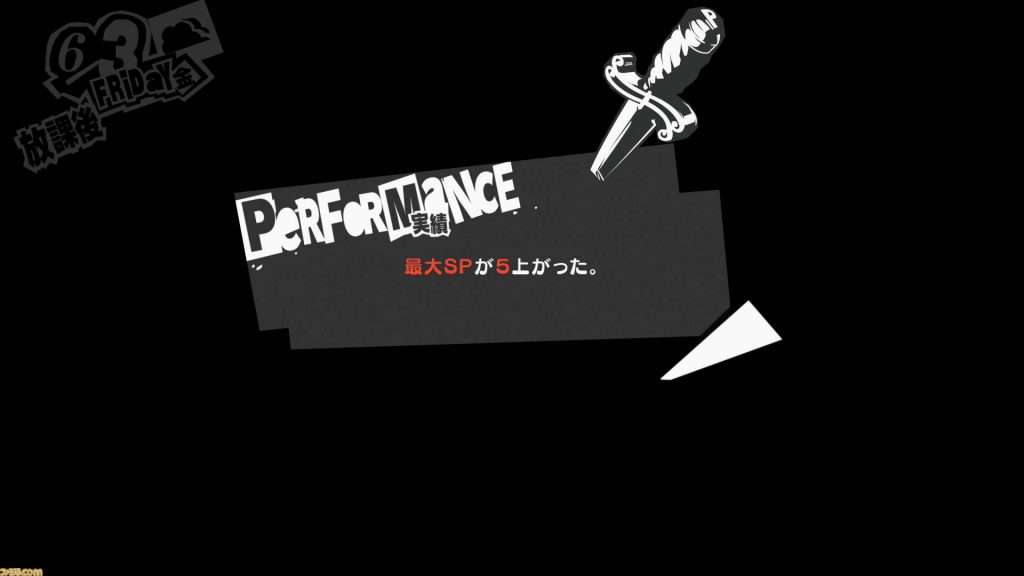 Furthermore, in P5R, when a confidant rank goes up, the main characters will contact the hero after the event. It will be easier to grow confidant ranks because your bond may increase depending on your answers. 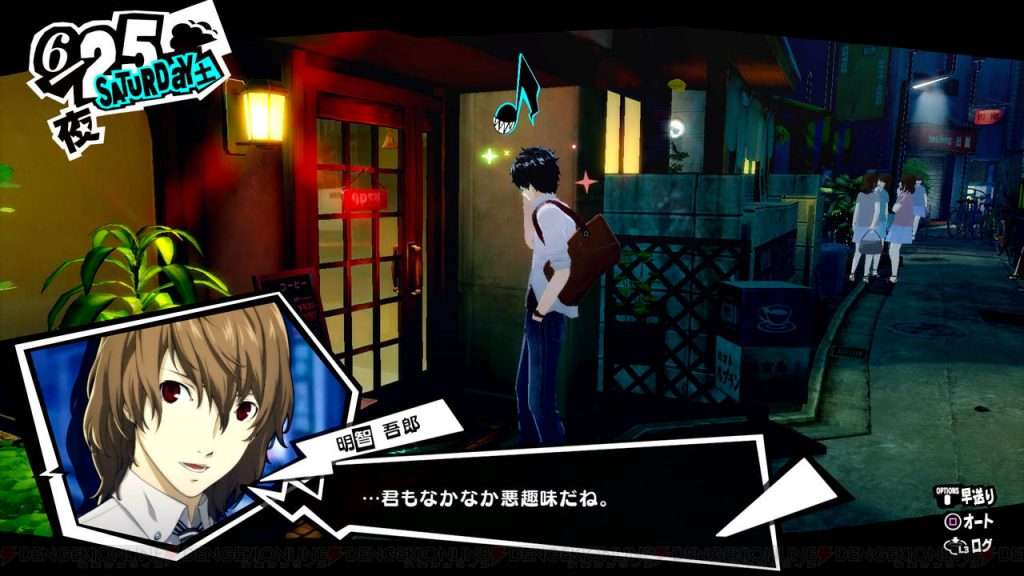 Calling right before the protagonist returns home. An opportunity to increase your bond!

Mementos has also evolved and is easier to play

At the event, save data was prepared to experience “Mementos.” Mementos is a dungeon which can be accessed at any time, unlike “Palace” dungeons which are part of the main story. Each time you enter, the structure changes, and the weather conditions affect the statuses and items that can be earned from shadows (enemies).

In P5R, various elements have been added to this system. First of all is the mysterious boy “Jose” who you meet in Mementos. It seems that he is studying human beings by collecting “flowers” scattered throughout Mementos.

As for his role, for the time being, it seems to mainly be a “shop” within Mementos with three main functions. 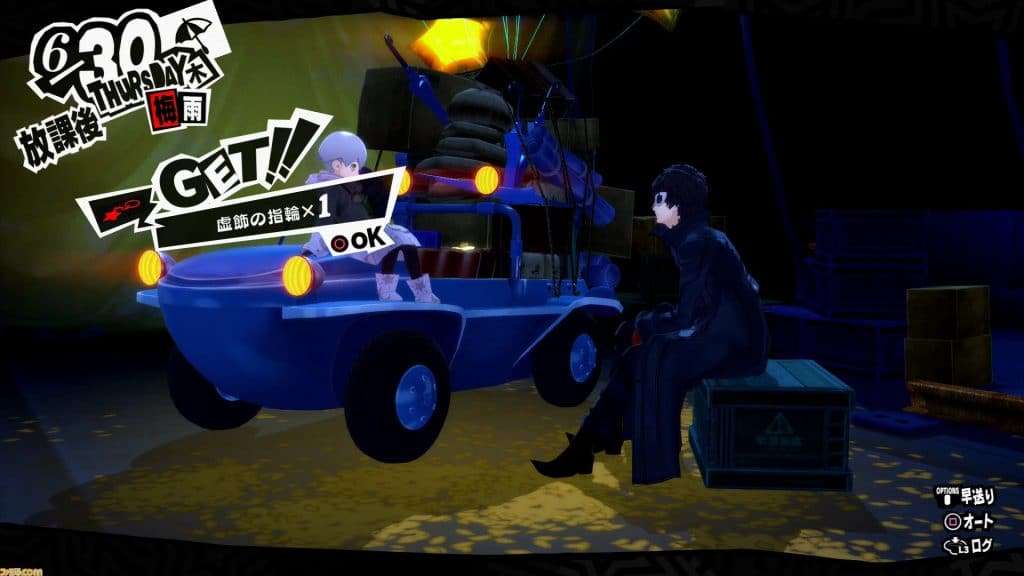 Special “Ishi” (material items) such as “XX Crystals” that are collected in each Palace can be exchanged for accessories. 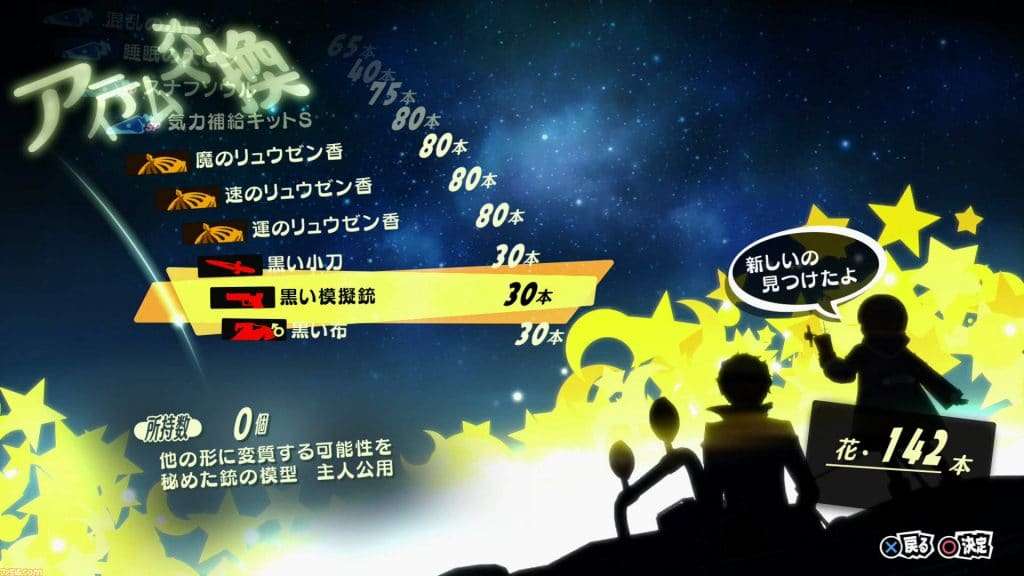 The “flowers” collected can be exchanged for special items. These items include “Snuff Soul” and other SP recovery items which are indispensable for exploration, or “Black Cloth” and other valuable materials. 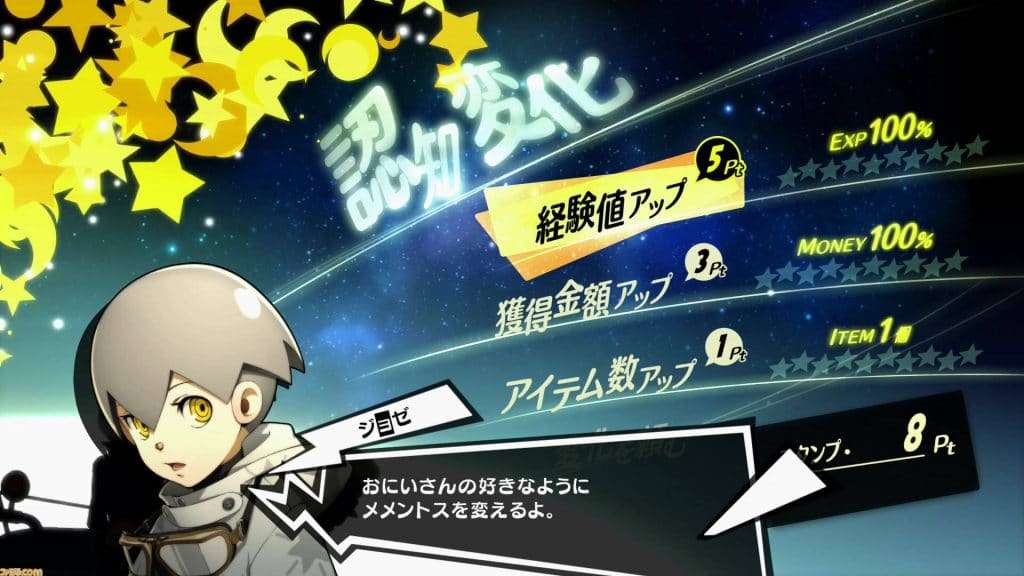 Changes in cognition are caused by “stamps” collected in Mementos. Cognitive changes are bonuses which will occur only within Mementos, such as increased experience gain or increase in money earned.

As with items, flowers are found throughout the environment. Especially during the early parts of the game, SP recovery items used in Palaces tend to run out, so if you collect flowers and exchange them for SP recovery items while fulfilling requests in Mementos, you will be able to progress through the game very efficiently.

On the other hand, unlike with flowers, there is a fixed number of stamps in each Mementos dungeon. There are many common locations where they can be found such as near the stairs, so if you explore diligently, you will gather them naturally.

Another additional element was confirmed called “Happening.” Different events will occur in Mementos from time to time, and the one the writer experienced was that everything was dark and barely anything could be seen, meanwhile the map was removed, so it was difficult to navigate. The writer notes that it was thrilling, as they managed to find their way to the lower floor. 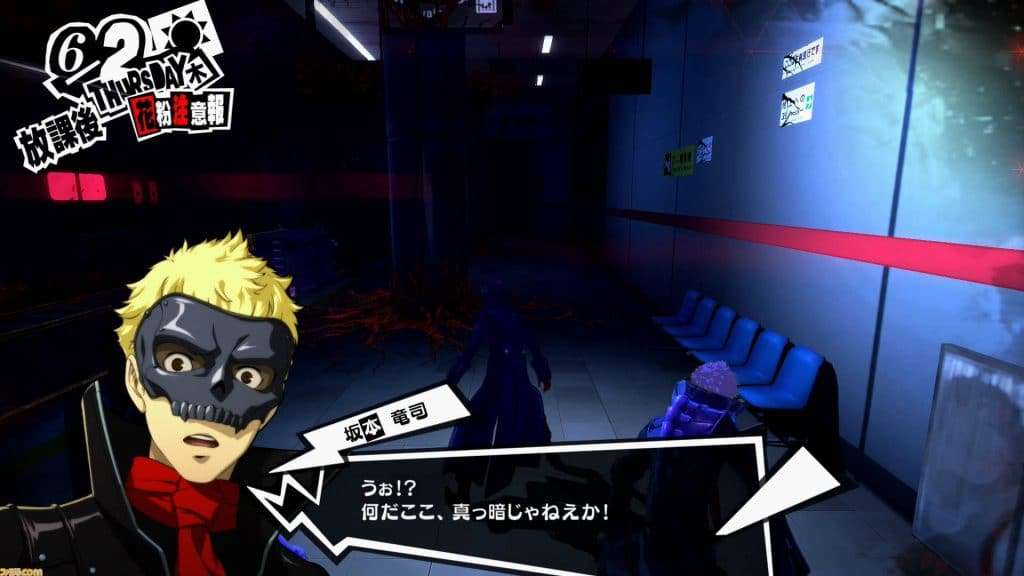 In the save data from the event, they were able to visit the new area “Kichijoji,” where Ryuji Sakamoto (voice: Mamoru Miyano) invites the protagonist to visit in early June.

Players are able to enjoy unique structures that the other areas do not have, with a realistically depicted shopping arcade. You can enjoy darts and billiards, visit a popular butcher shop, visit a jazz club, go to a secondhand clothing store, or interact with a merchant to exchange items. There are many spots and people who will help you improve your abilities and equipment, so you may end up spending a lot of time here. 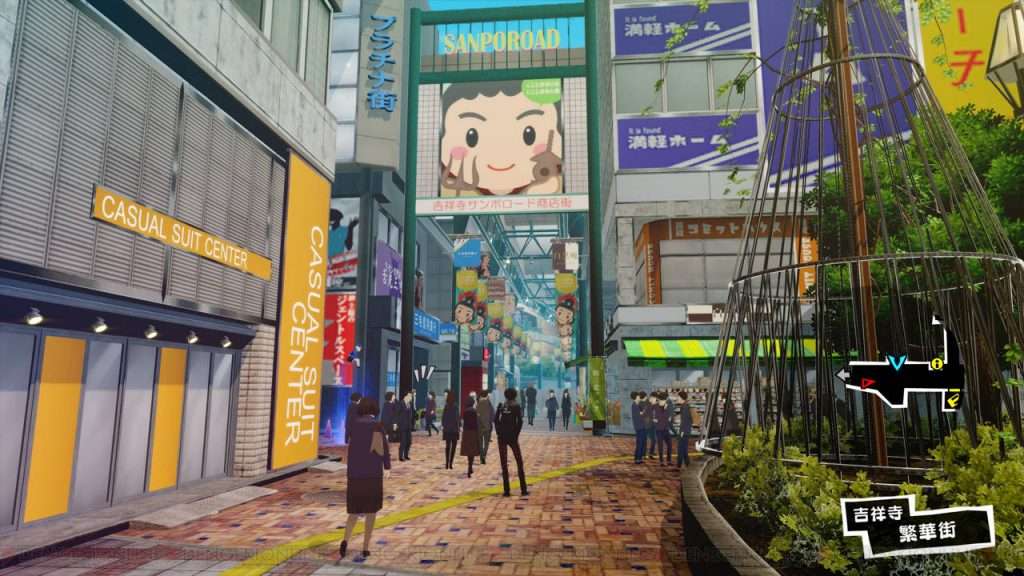 An information desk can be found near the entrance with a helpful attendant. You should hear everything she has to say once. 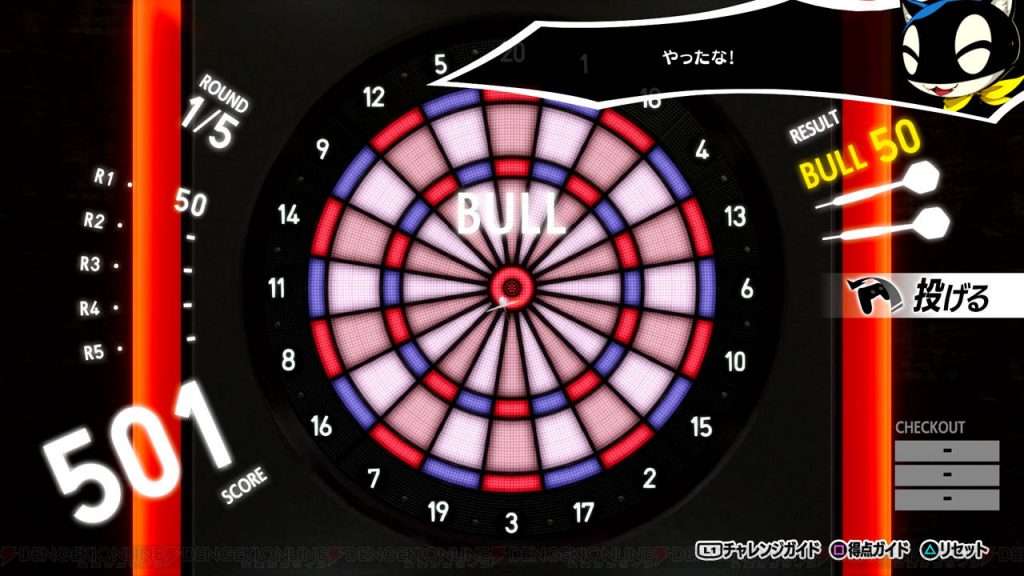 Attractions here like Darts and billiards will be useful in battles, with elements like increasing “Baton Touch Rank.” The maximum value of SP can be increased at a temple, and jazz clubs can enhance persona abilities.

The writer was able to play the new “Challenge Battle” mode in the Velvet Room, but it was the same demo version as the one that took place at Tokyo Game Show 2019, so you can refer to the previous article for it.

Other notable features are hints such as “I think I can improve my proficiency” or “I can spend time with someone” depending on where you point to on the map to fast travel. Things that you are able to do are displayed through the “Daily Assist Command function,” which suggests social stats you can improve or people you can meet. Because it will no longer be necessary to manually check each location, it seems that total playtime will be greatly reduced.

For the new characters Kasumi and Maruki, it seems one’s impression of them will change as the game progresses and as more about them is revealed. The writer notes that the various quality of life improvements, such as the ones in Mementos, have made the experience of playing the game significantly more convenient.

With just a few minutes of play, the game showed the writer that P5R is not just a re-release, but a whole new work that makes it appropriate to define it as a “rebirth.”