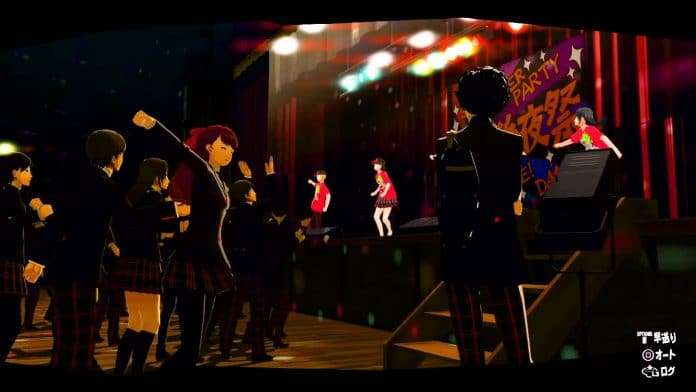 Below is a translation of the interview with the music composers via @shininyan.

An interview about P5R’s stylish audio with Shoji Meguro and Toshiki Konishi, who were at the center of the game’s sound team.

Q: First, please tell us about what you were responsible for in P5R.

Konishi: As with P5, I was responsible for the BGM in the animation parts. I also produced more of the game BGM than I did for P5.

Meguro: I did everything else. *laughs*

Q: The entire sound team was involved with P5, but for P5R, was it mainly just you two?

Konishi: The BGM was assigned to me and Meguro, but (Kenichi) Tsuchiya and (Atsushi) Kitajoh also participated.

Q: P5R has finally been released. How long ago did production begin?

Meguro: Production was greenlit in 2017, and I started working on the opening theme “Colors Flying High” in around September.

Q: I had the impression that the music was created after the game’s outline had already been decided, but I see that production began quite early.

Konishi: The opening theme has to be done early because the animation has to be created for it. It wasn’t for a while after that that we began serious work on P5R, but Meguro and I were working on the music for the TV anime in the time between, so it was a well-timed transition.

Q: Was the title already decided when you began work?

Meguro: It wasn’t, but the “gorgeous” and “royal” concepts had been. By the way, I was the one who suggested “gorgeous” *laughs* That’s why when I composed “Colors Flying High”, I made it with more of a gorgeous feel than a royal one. I used something I made back during P5 for the melody. It was a song where I liked the hook but didn’t have anywhere to use it, so I wanted to make use of it if there was a sequel. Although, the mood of the song changed a lot, because I changed the tone to match P5R’s aesthetic. It originally felt closer to “Royal Days”, the title screen theme. 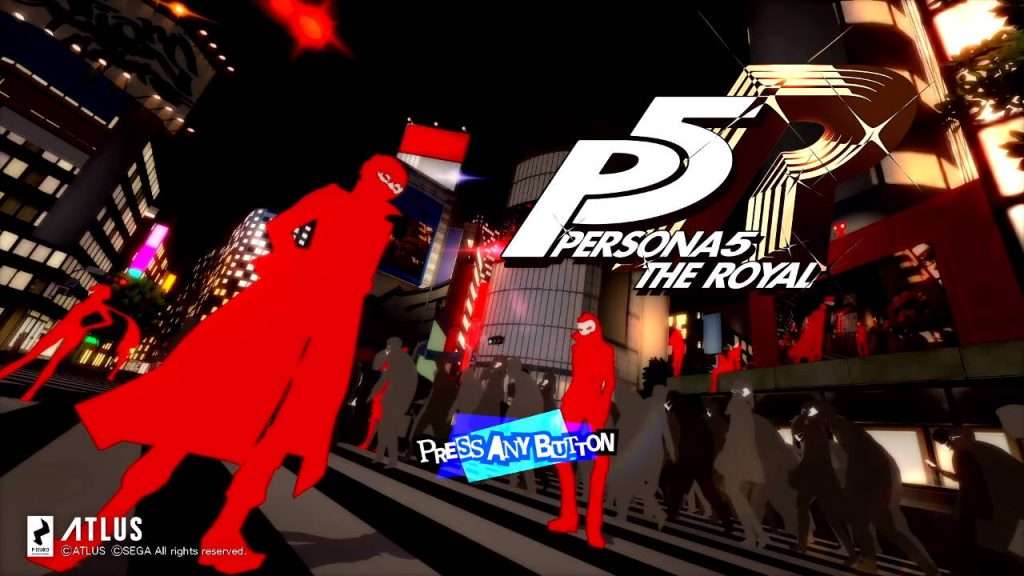 Q: Konishi-san, since you were responsible for the animation parts, did you also start work early?

Konishi: Yes, the first track I composed was for an animated part. I think the next one after that was “Ideal and the Real”, a track used for Maruki’s counselling cutscene. Maruki’s design and counselling style were decided early on, so I was able to compose that track with a solid image in mind.

Konishi: Only for the animated parts. Tsuchiya and Kitajoh were responsible for the ones in the game parts.

Q: There’s a new battle BGM called “Take Over” that plays when you ambush an enemy. What was the concept behind this song?

Meguro: Like the other songs, the concept was gorgeousness. The music for P5 was more modest—a mature acid jazz—so I intentionally didn’t use brass instruments. This time I brought in the brass, as well as strings, and made a brighter, livelier track.

Q: Lotus Juice wrote the lyrics for this song, if I recall correctly.

Meguro: He became connected to the game through the concert, and he knows P5 well since he played the game on his own, so I asked him to do it. Benjamin Franklin, who wrote the lyrics for the opening theme, does so firmly to match the melody and theme, and in contrast, Lotus Juice adds his own artistic style with an understanding of the game. He also discussed them with the vocalist, Lyn, and I felt that we had a good sense of teamwork.

Q: Speaking of teamwork, “No More What Ifs”, the song that plays at the jazz club in Kichijoji, was also a combination of Lotus Juice’s lyrics and Lyn’s vocals.

Meguro: Yes. That song is a little different from the other BGM tracks, because it’s supposed to sound like an actual singer at a jazz club.

Q: What did Lyn think of the songs this time?

Meguro: Personally, I composed songs that I knew she’d be able to sing, but she always called them hard *laughs* When we were working on P5, I got to learn her amazing vocal range. Her natural voice is rather low, similar in range to a male vocalist. Meanwhile, there’s a large difference between her natural voice and her falsetto which tends to swing high. That said, her natural voice has the most power, so in order to let her sing with that power, I lowered the maximum pitch and made the song in a way that would bring out her best range.

Q: It seems that there’s a specific day when you can hear Lyn’s song at the jazz club, and the other days it plays the Thieves Den BGM…

Meguro: There’s a reason for this. The regular BGM connects the player to the game setting, and has a similar purpose to the user interface. However, the jazz club’s music is actually playing inside the game world, and is being sung by an actual singer. Also, the Thieves Den BGM plays in an area separate from the main story, so it’s treated differently from the regular BGM. That’s why we decided to use these two tracks in the same place. 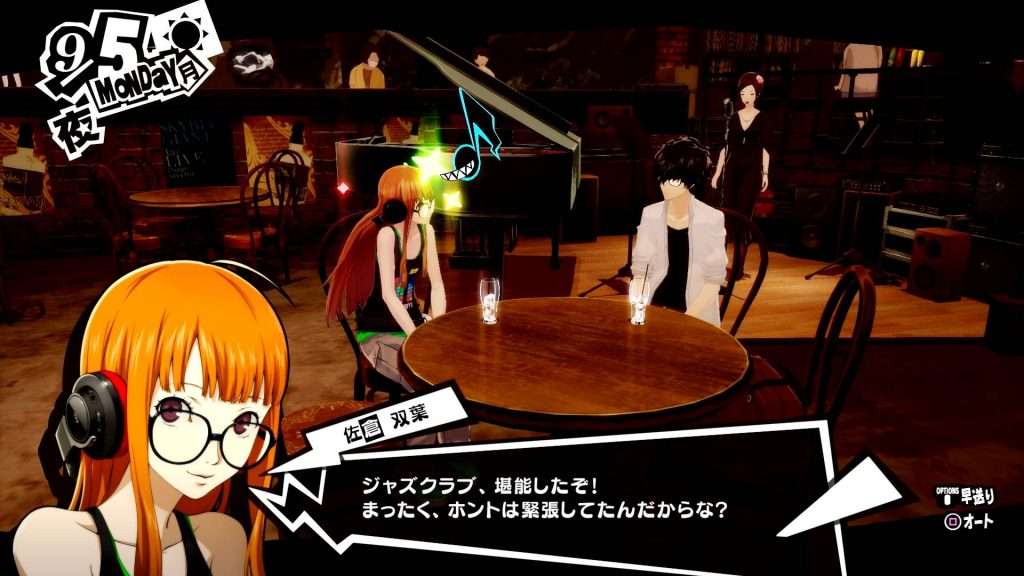 Konishi: Yes, that’s why most of the new songs are in the latter half of the game.

Meguro: We were asked to put some more in the first half because there originally weren’t really any *laughs*

Q: Regarding songs that you can hear early on, the new Mementos music stood out to me.

Meguro: Back in P5, I wanted Mementos’ music to change in tone as you got farther down. However, I was only able to put one track in at the time, so I knew it was something I had to address for P5R. That’s why I added four tracks this time.

Q: Which of the new songs particularly stood out to you?

Konishi: That would be Maruki’s counselling event theme, “Ideal and the Real” which I mentioned earlier. Lately, I’ve felt that composing a song while uncertain about it doesn’t produce good results, but this song was a smooth process from start to finish, and I never felt that it was lacking. I made it at the very beginning, but I think it was my best one.

Q: What about you, Meguro-san?

Meguro: The jazz club’s “No More What Ifs”. It’s a slow, emotional song that brings out Lyn’s forte. Her English pronunciation has always been great, but this time we had Lotus Juice helping with the direction, and he said her pronunciation sounded 100% native. It feels like we brought out Lyn’s hidden potential. 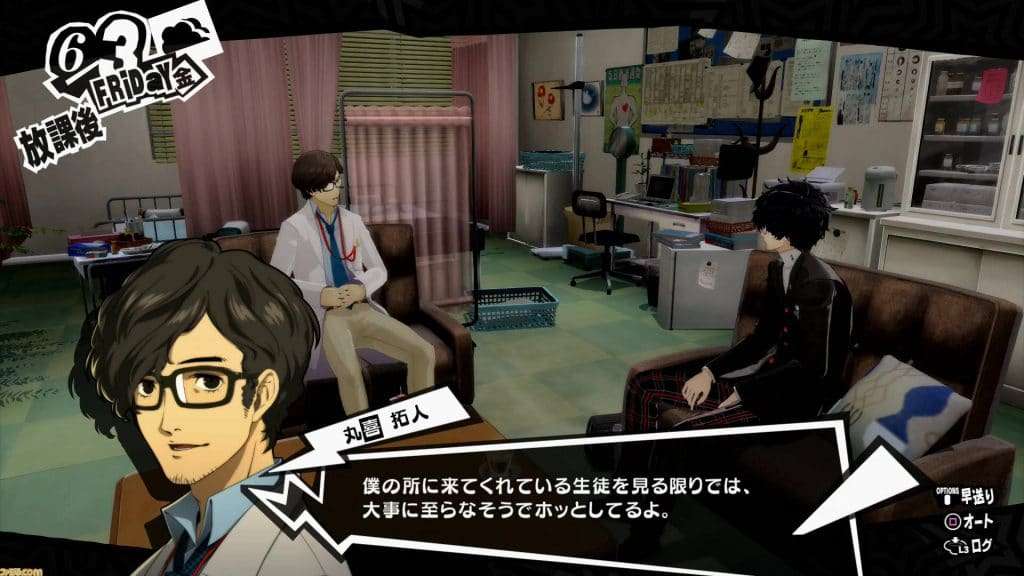 Q: I got to see the track list for the soundtrack that comes with the Straight Flush Edition, and there are a lot of other new songs that caught my eye, like the 8-bit style “Featherman Seeker” mini-game BGM.

Konishi: There was interest in adding Featherman to the retro games that train your social stats, so that track was requested. The composer (Ryota) Kozuka created “Let’s Go! Phoenix Ranger Featherman” for P3D/P5D, so I started by arranging the original track in 8-bit style, and then creating another version based on that.

Meguro: You created the 8-bit version?

Konishi: I set up an environment for creating 8-bit style music, and did it. I made sure to keep it to three sounds, to the point where if I wanted to add a fourth, I had to decide which one to remove *laughs* It might be difficult for people who haven’t listened to that kind of music before, but I’m from that generation, so I was able to put it together quickly.

Q: It surprised me that Kichijoji’s “Billiards & Darts” BGM was an arrangement of a track from Shin Megami Tensei.

Meguro: It was Tsuchiya’s idea to use Shin Megami Tensei’s “Kichijoji” track for a shop in Kichijoji.

Q: There was also an unexpected idol song.

Konishi: The unused song that Kitajoh created during P5 got to see the light of day *laughs* Please look forward to seeing where it gets used. 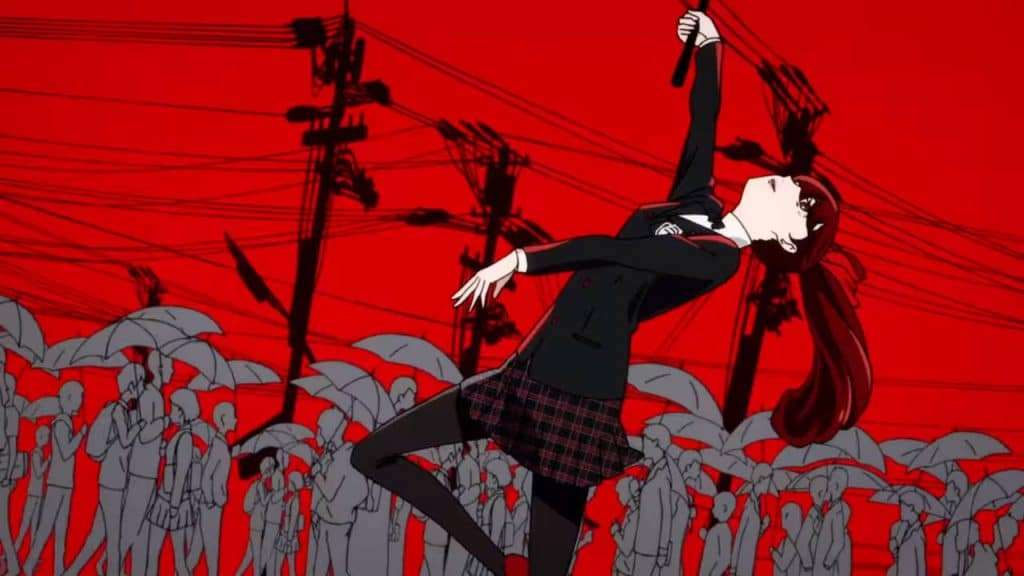 Q: Now to wrap things up, in your eyes, where does P5R’s charm lie?

Meguro: Producer/Director (Katsura) Hashino, who had been the central figure since P3, has left the series and passed the baton to the next generation. Adding this new energy hasn’t revolutionized the game or anything, but I do believe that there have been changes. It feels like they’ve put in everything they’re passionate about, resulting in a game packed with interesting things.

Q: It certainly is a dense game. What do you think, Konishi-san?

Konishi: In all of the meetings I participated in, there were so many ideas for things people wanted to do. We had to bring in the new characters while keeping the game’s original charm, and it feels like we wrapped everything together well.

Meguro: Up until now, everything got brought together at the end by Hashino. Without him, I thought we’d have to choose someone to make the decisions, but instead of having a specific leader do it, the entire team worked together to create the game based on the series’ essential points. They say that too many cooks spoil the broth, but I think we did well.

Q: It seems that each section was able to share the same vision. Finally, please give us a message for the readers.

Konishi: Persona 5 Scramble is still slated for release, but P5R feels like it’ll be a distinct milestone for P5 nonetheless. It keeps to the original game while bringing in new characters with charms of their own, as well as new Phantom Thief-like features like the grappling hook. I hope you enjoy the game.

Meguro: With all the new features, I’m sure it’ll take quite some time to play, but I hope you’ll explore everything the game has to offer. You can hear Konishi’s songs and mine by playing the game normally, but some of Kitajoh and Tsuchiya’s arranges won’t come up unless you explore the more niche places. They’re all great songs, so I hope you’ll play enough to hear all of the songs that are on the soundtrack.