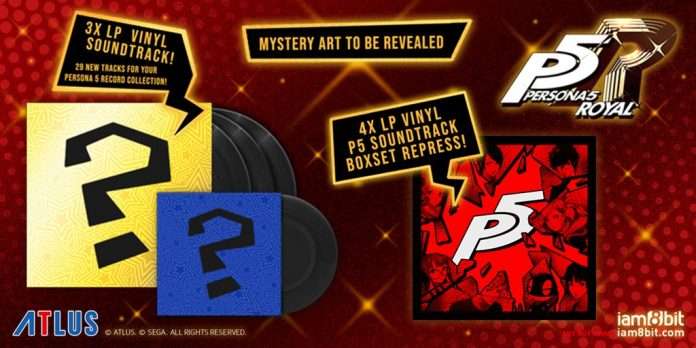 Pre-orders for both will open on Thursday, December 16, 2020 at 9:00 AM PST. Orders of the Royal 3xLP made by December 31st will include a free 7″ record, featuring the Velvet Room theme song.

Now more than ever, we’re thankful to have the Phantom Thieves in our lives. Psychologically, they’ve got a lot to teach us about humanity and our complex emotions. It’s not an easy job… but as they bounce around the Metaverse, rescuing corrupted hearts, they do so with complete grooviness and pizzazz. It’s an epic and intimate soundtrack, which at first, transforms your living room stereo into a bombastic rock symphony orchestra, then spontaneously flips it, to become a smoky jazz lounge act. Simply put, the Persona 5 Royal soundtrack is magical, multi-faceted and absolutely inspiring — as chill and as cool as can be — which is why iam8bit is very proud to present this extension of our P5 vinyl collection, a perfect addition alongside the original P5: Essential Edition 4xLP Box Set, complete with some mysterious and elegant trappings, like a premium (and interactive) diecut jacket and lots of luxurious gold foil for good measure. Preorders open @ 9am PT, so keep your eyes peeled. But in the meantime…

*As an added bonus, by very popular demand, we are thrilled to announce that all preorders for the P5 Royal 3xLP placed by December 31, 2020 @ 11:59pm PT will include a FREE 7” record featuring the much-lauded “Hymn of the Soul” Velvet Room Theme. Previously, this song was only available on the now sold-out Deluxe Limited Edition 6xLP Box Set. After a multitude of requests from fans, iam8bit, along with our friends at Atlus, thought — WHAT THE HECK—– it’s the holiday season! Let’s bring some joy to our fellow Phantom Thieves from around the world! Note: You cannot purchase this 7” record separately, and it will never be repressed after this one-time promotion. Preorder before the New Year!

Persona 5 Royal included a two-disc soundtrack in its Straight Flush edition in Japan, and a 10-disc mini OST in the Phantom Thieves edition in the West. The soundtrack has not previously been released standalone.