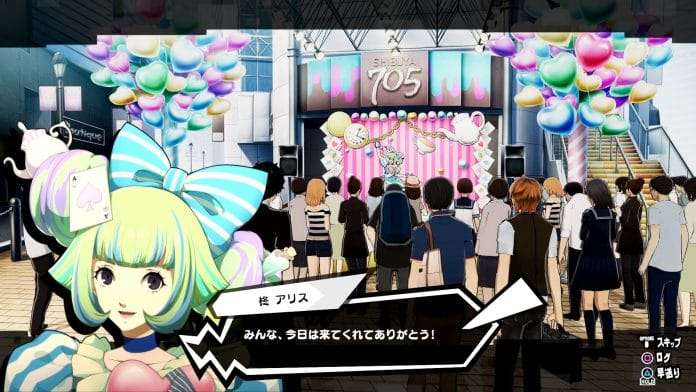 Atlus has released the first episode of the Travelling “Morgana Newsletter” mini-program series, which will detail new information regarding Persona 5 Scramble: The Phantom Strikers, in a similar format to the “Morgana Reports” which promoted Persona 5 Royal.

The first newsletter introduces the game and details the first area, Shibuya.

A webpage for the report has also been opened with screenshots and further information.

About half a year since parting from each other upon resolving the mysterious incident that bustled society, the Phantom Thieves gathered again at Cafe Leblanc. While they were planning to enjoy summer vacation together, they wind up lost in an unknown world following an unexpected event. It was a terrible world where shadows snatched away human “desires,” ruled by the command of someone called King.

Mysterious “Conversion Events” sprung forth all over Japan. To pursue these incidents, the Phantom Thieves set out on an RV journey of societal reformation.

New characters that are key to the story will also appear, including Sophia (voiced by Misaki Kuno), a girl who lost her memory, and Zenkichi Hasegawa (voiced by Shinichiro Miki), a skilled public safety police officer.

Shibuya, a place brimming with fashion and sub-culture, and where young men and women gather. At the fashion building Shibuya 705, an event will be held for popular artist Alice Hiiragi (voiced by Ayane Sakura), who is known for her unique fashion and music.

However, there is another side to the bustling city of Shibuya… In the heart of a Shibuya that has become a different world, a Shibuya 705 transformed to look like a castle stands tall, and the appearance of the city has changed significantly. Slip through traps and mechanisms made to obstruct intruders, mow down the shadows, and set your sights on Shibuya 705.

In Persona 5 Scramble: The Phantom Strikers, the members of the Phantom Thieves are playable. In addition to Joker, you can also fight as your favorite member of the group (except for the navigator).

There are various tactics, including summoning Personas and pursuing the enemy.

You can also dominate the battlefield in style with “Show Time” and “All-Out Attacks.”

The second newsletter will be released in late November 2019, covering another location out of Sapporo, Sendai, Osaka or Okinawa.