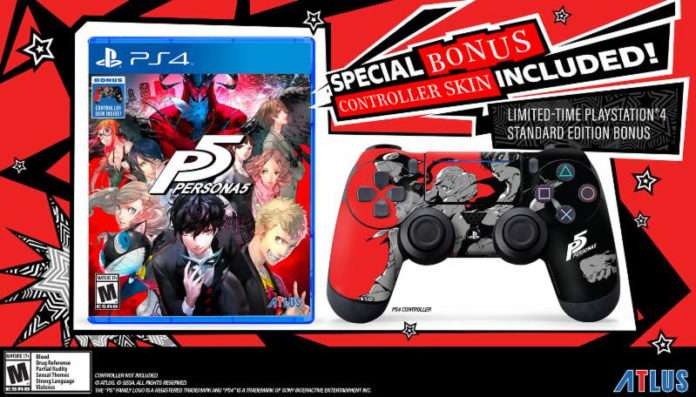 Atlus USA has announced that standard edition copies of Persona 5 will include a limited edition skin for the PlayStation 4 DualShock 4 wireless controller.

The Phantom Thieves of Hearts are full of surprises, so it’s no wonder they decided to leave their mark on the standard edition version of Persona 5! Those who have missed out on the “Take Your Heart” Premium and SteelBook editions will receive a DualShock®4 Wireless Controller skin with their standard edition of the game! This stylish decal features a few members of the motley crew known as The Phantom Thieves, and is the perfect accompaniment for a long night of stealing hearts. The controller skin is available inside marked copies of the standard PS4 in the Americas while supplies last.

Oh, and we also enlisted the help of Ann Takamaki’s voice actor Erika Harlacher in our newest video. Watch Erika, aided by the ghost of former PR Manager John Hardin, reveal the decal and demonstrate the proper way to Persona-ify a controller!