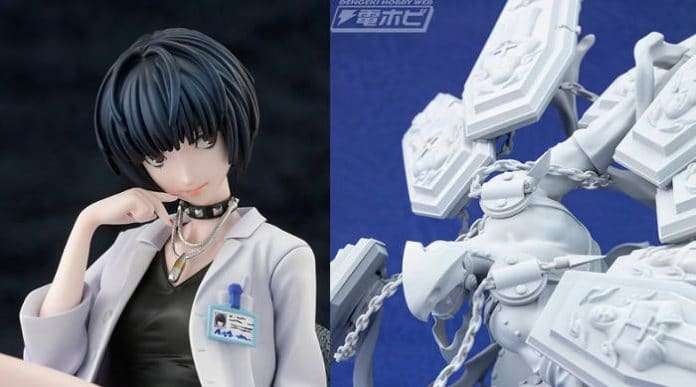 Following the Japanese hobby figure exhibitions which took place last month, news related to the Persona 5 Tae Takemi figure by Amakuni and the Persona 3 Thanatos figure by MegaHouse has surfaced.

Pre-orders for the Persona 5 Tae Takemi figure have begun on June 25, 2019 and will end on August 14, 2019 via mail order at Hobby Japan. The figure costs 15,800 yen (including tax), and the first shipments will be sent starting in the February to March 2020 range.

The figure is by producer AMAKUNI. It represents the back-alley doctor and confidant character Tae Takemi who supports the Phantom Thieves, from the highly popular Persona 5. The charm of this adult as she appears at the clinic has been recreated. Her white coat is removable, with a sleeveless dress underneath.

The Persona 3 Thanatos figure was announced to be in production by figure producer MegaHouse at last months’s Mega Hobby Expo 2019 Spring. A prototype had been shown at the exhibition, and it will be part of MegaHouse’s “Game Characters Collection DX” series.

More pictures have surfaced of this prototype via Dengeki Hobby.

The large figure has been meticulously crafted, and a picture has been provided to compare its scale to an iPhone 7.

Information on the colored sample will be given in a follow-up report by Dengeki Hobby.