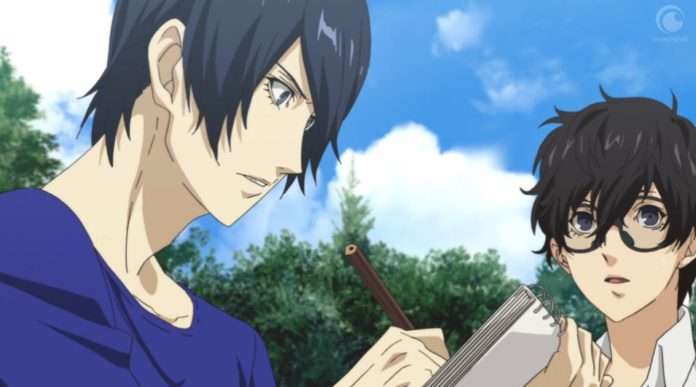 I had high expectations for the next ‘Confidant’-focused episode, with the last one (episode 9) being my personal favorite episode of the show so far, but I genuinely didn’t expect the anime team to surpass it so soon. To put it another way, Episode 13 doesn’t just match the series’ peak, but it defiantly pole-vaults over it. It tells a story that is largely anime original, a perfect display of the team’s desire to not rely on the source material as a crutch. There’s a lot to unpack here, but I’ll start with a character that absolutely everyone loves and adores: Goro Akechi.

Even if you haven’t played or beaten Persona 5, you should vaguely be aware of Goro Akechi’s existence if you’re into Persona. Inarguably one of the most polarizing characters in the franchise, Goro carries a tremendous amount of baggage with him, and regardless of whether you talk to someone who loves or hates him, they will invariably go into detail about why they feel that way.

I won’t go into detail about my thoughts on him, as that would lead to spoilers, but ultimately I think Akechi was mishandled in the game. But somehow, against all odds, the anime is trying to rectify that. Of course, it’s too early to say he’s been “fixed”, but their decision to actively incorporate him into the main narrative has been a fruitful one. 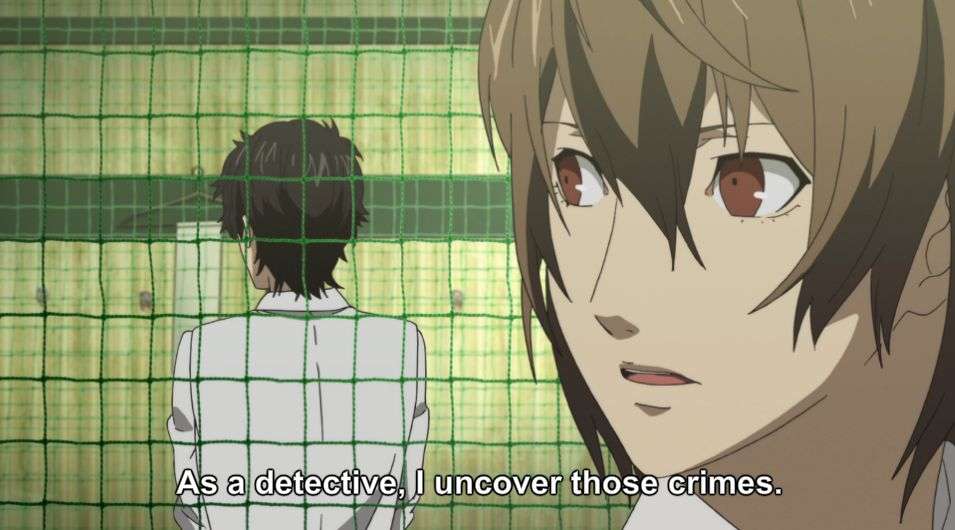 Akechi’s relationship with Ren forms the foundation of the entire episode, and it really should be stressed how different it is compared to the game. While the game hints at a connection between the two, it never goes out of its way to show it. Outside of their occasional interactions, there’s nothing really substantial. This has negative repercussions for the narrative down the line, but suffice it to say, their relationship receiving further development in the anime is more than a good thing.

The seemingly innocuous chess game at the beginning of the episode ramping up as Goro begins to talk about the morality of the Phantom Thieves is the perfect example of a good moment between the two. There’s a genuine back-and-forth between both parties, and you can feel the tension build. This is good, quality character development for both characters, and it’s the rivalry that just isn’t present in the game.

I love that there’s this extra layer to their cat and mouse chase, manifesting itself almost every time they meet each other. They clearly like and respect each other, but they share two opposing viewpoints, and they can’t help but confront and continually try to outwit the other. I love how a simple outing at a batting cage turns into yet another argument about the Phantom Thieves, with Goro having the upper hand. It’s good stuff. 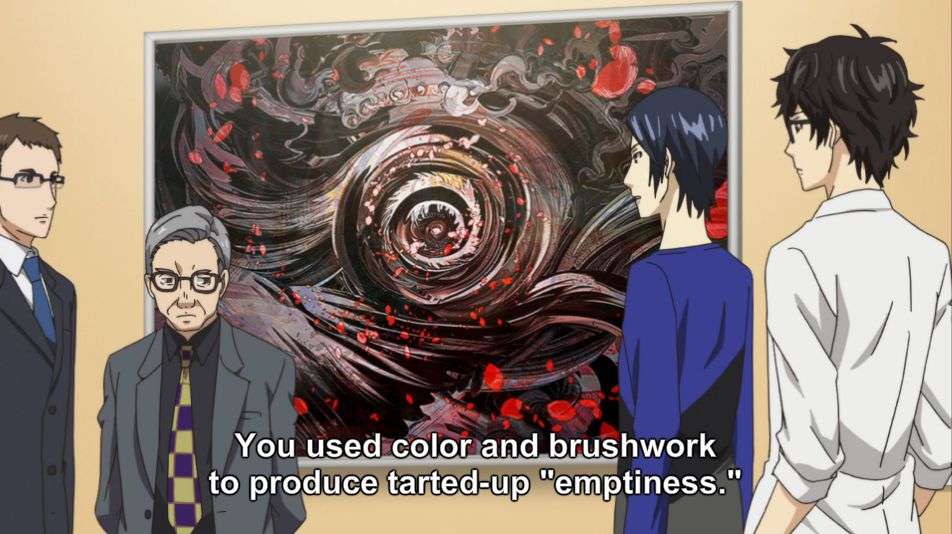 Yusuke’s ‘Confidant’ storyline, the other facet of the episode, is handled wonderfully here. Yusuke has honestly been one of the stars of the Persona 5 anime, with his arc being the strongest and most compelling, so I’m glad to see that hasn’t changed here. After the Madarame arc, Yusuke’s position in society is in flux. His life completely uprooted with no real direction to take. His dilemma, his idea of how an artist SHOULD act, and his desperate fear of not becoming like Madarame, are all engaging.

The anime does a good job of synthesizing the ‘Confidant’ into a single episode, with a hilarious montage going over some of the more memorable and fun aspects of the ‘Confidant’ while also developing Goro’s investigation. The team really deserves to be commended for making mundane, real-world events so exciting (especially in comparison to the supernatural elements of the story). Overall, it’s a great adaptation of a great ‘Confidant,’ and it’s another example of the character benefiting from having their storyline naturally integrated into the main plot. Part of P5’s problem is that characters are mostly forgotten after their arc, and the anime has taken extreme steps to avoid this.

The main cast still feel like distinct characters, with nobody really falling to the wayside (as of yet anyway). Speaking of which,  while Ann, Ryuji, Makoto, and Morgana don’t really factor into this episode, I really did like their quick conversations. Ann asking Makoto to hang out, and Morgana excitedly asking to tag along was cute, and the sort of interpersonal group discussion I wish was more present in the game. 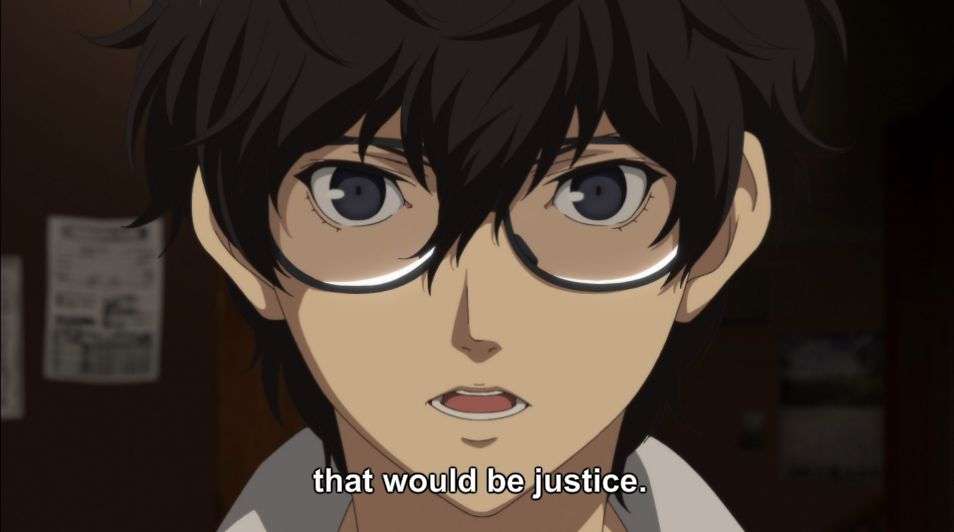 Ren and Goro end up successfully catching the true culprit, and while that case is closed, Goro’s ideological conflict with the Phantom Thieves remains. I particularly love Ren’s swagger, with him outright admitting to being a Phantom Thief supporter to Goro, compared to the game wherein he awkwardly tries to deflect it when the subject came up. There are several layers of deception in Goro and Ren’s exchange, in a way that’s reminiscent to Light and L from Death Note, and it legitimately put me on the edge of my seat.

I just never expected the anime to actually surprise me (especially considering its existence as an adaptation), and it’s largely why I adored this episode. From the way it skilfully dovetails Yusuke’s arc and Goro’s investigation together, to changes from the source material, and the overall style and energy of the episode, it just impresses on nearly all fronts. It feels unlike anything Persona 5: The Animation (and arguably the game) has delivered so far, and it’s a pretty clear example that when the team is given full freedom to do what they want, they deliver.