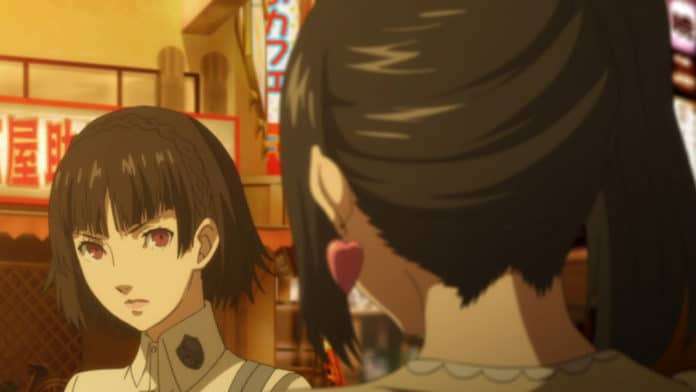 With Persona 5: The Animation likely having 26 episodes at the very most, this episode marks the second half of the anime, bringing with it a new opening (which I assume is a placeholder due to all of the reused footage) and largely serving as a recap/setup episode. This episode largely works as a standalone episode as well, and it’s reasonably engaging throughout. I’m not a fan of recap scenes myself, but they did a fairly decent job of incorporating them into the narrative in a way that feels somewhat natural. 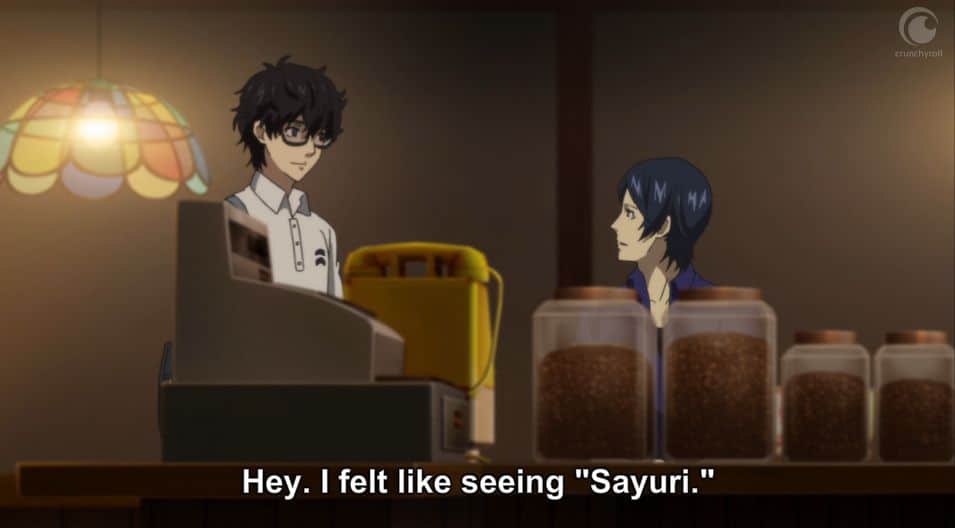 I particularly enjoyed Yusuke’s recap, in part due to the Madarame arc still being the best one, but also because it’s yet another showcase of Yusuke’s friendship with Ren. The anime has done a really good job of balancing Ren’s interactions with his friends. Instead of taking the easy way out and solely focusing on Ren and the main character of a specific arc, the anime instead opts to spread that focus. Pretty much every character has received focus after their respective major arcs (with Ann being the sole exception, but it’s likely she will get hers in the near future), which is pretty impressive when considering how many characters are in this show.

I’ve said this before, but characters are one of this anime’s core strengths and I’m happy that hasn’t really changed. This episode covers Makoto’s ‘Confidant,’ and while I don’t think it was handled nearly as well as Ryuji’s or Yusuke’s plotlines, it was still fairly enjoyable. People have criticized Makoto’s ‘Confidant’ for spending too much time on side NPCs and not giving Makoto enough focus, and while I agree to a certain extent, I still think it’s a reasonably solid ‘Confidant’ storyline for a couple of reasons. 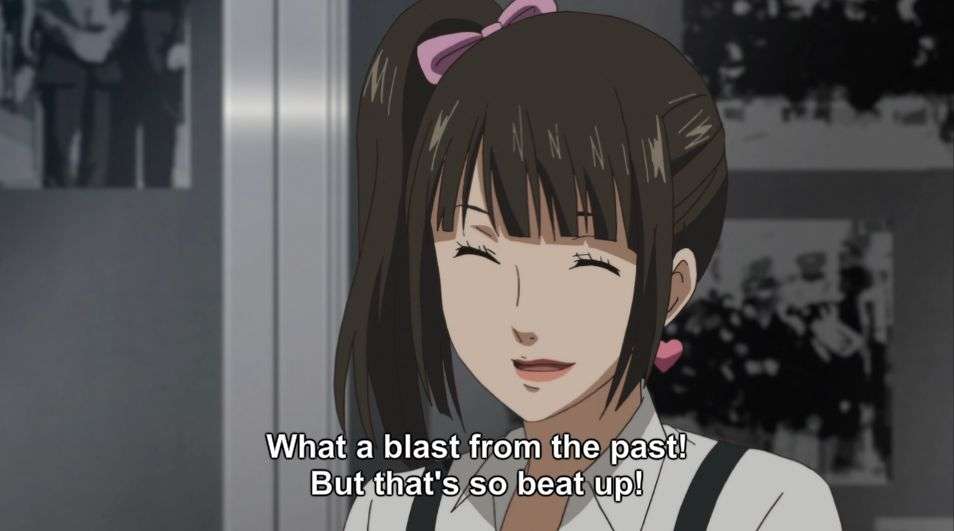 We get a good display of Makoto’s newfound confidence, her ability to solve problems in the real world (without having to rely on the Phantom Thieves) and her reinforced values, which is explicitly shown when she goes out of her way to help Eiko (despite how obnoxious she is). It’s not a particularly exciting story and we don’t get too much insight into Makoto’s home life, but given how she gets a fair amount of focus in the main narrative anyway, it’s not all that disappointing.

Eiko herself is a fun character, and the anime giving her a defined face and voice is very noticeable. She actually feels like a defined character, instead of being the faceless NPC that is inexplicably given a lot of focus in the source game. It’s actually kind of baffling that they didn’t give her a facial portrait in the first place, considering how integral she is to Makoto’s ‘Confidant’ storyline. Her boyfriend gets an upgrade as well, and he’s even more unlikable than before, as the anime even goes as far as to make him a Mementos target. This also raises the question of why they didn’t make him a Mementos target in the first place, considering how much of an unrepentant scumbag he is. 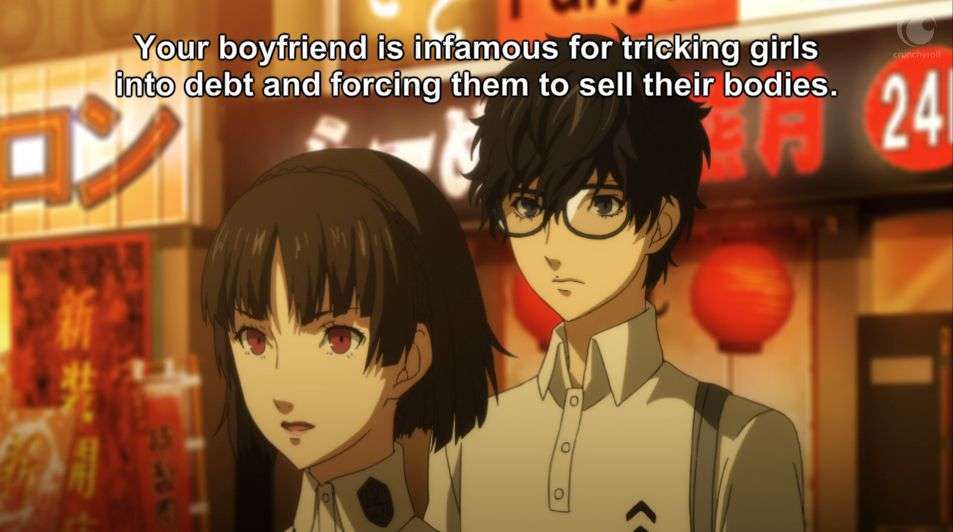 The anime actually solves one of the logical inconsistencies present in the game by doing this. In the game, the Phantom Thieves don’t reform Tsukasa’s heart, instead opting to find “proof” of his misgivings in an attempt to convince Eiko that he’s rotten. Not only does it make it needlessly harder on them, but considering he literally makes a living coercing women into prostitution, not reforming his heart seems like a serious oversight on their part.

Thankfully, the anime addresses this and cuts out a lot of the meandering, which gets to the punch quicker. Makoto tricking Tsukasa into exposing himself as a scumbag is just as enjoyable as I remembered it, and Makoto, in general, taking charge and solving this problem on her own is great. She’s one of the most self-reliant characters in the setting, and I love how her ‘Confidant’ reflects that. This episode isn’t going to blow people away in terms of plot development or animation, but it’s a nice bridge to the next season and a good follow up to Makoto’s character. 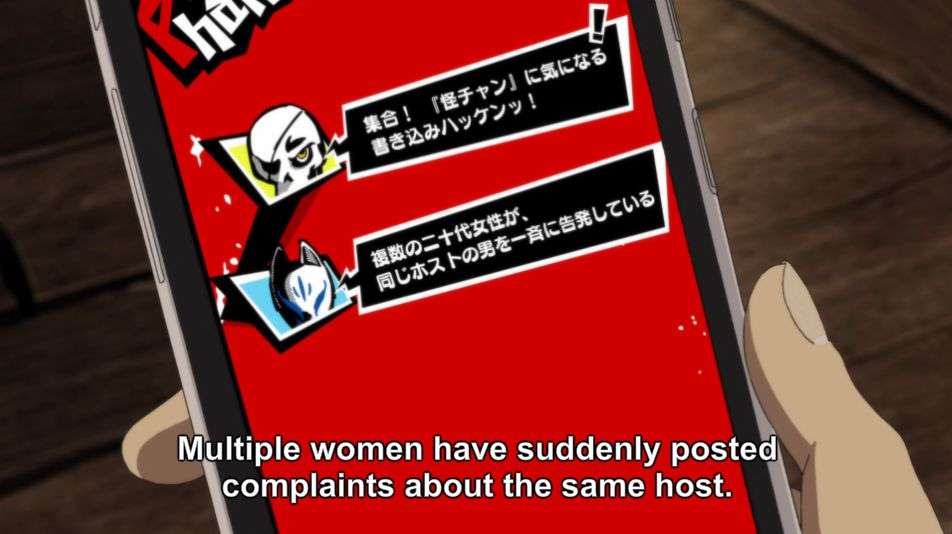 This episode does make me feel a little concerned, though. How on earth do they plan on wrapping up the story in just 24 – 26 episodes? We’re halfway through the anime, but only three out of the eight major arcs have been covered so far. The anime’s pacing has stabilized for a while now, and while it’s almost entirely been to the show’s benefit, it seems like we’re either going to see a new cour (unlikely) or some heavy cuts. Regardless of how things shake up, i’ll dutifully cover anything this anime throws our way.