Atlus opens a Persona related teaser website for an announcement that will presumably take place on November 24, 2013 at 8:00 PM JST. 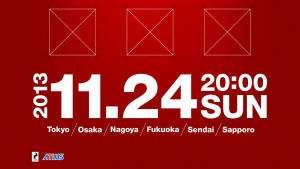 In an interview with the Sony Play Community website, Hashino responds to a question about the recent Persona teaser, stating:

Are you curious? You’re curious, right?” says Hashino with a laugh. “I believe that we’ll soon be able to tell you all the announcements we’ve been keeping, so please look forward to that day… if you’d allow me to simply leave it as that for now. However, I believe that we will be delivering news that will most likely please all the fans. 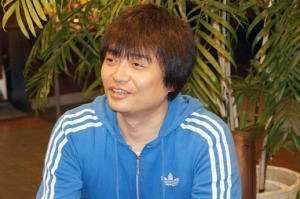 The Persona teaser website that went up in September is updated for the first time with images of Teddie from Persona 4. 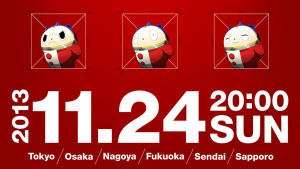 Additionally, an Amazon Japan listing confirms that the Persona Magazine, which had its last official issue (“#One More”) in September 2012 and its last special issue with Dengeki Maoh in July 2013 (“#S.E.E.S), would be returning on December 5, 2013 with a new issue title “#Re:birth.” 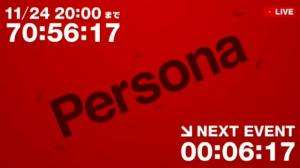 There were also three “Midnight Channel” events, with each video becoming clearer than the last. In the end, they were to show off the locations in Japan where the event will be broadcast on large screens.

Persona 5 is announced. It has a Winter 2014 release window and it is announced for the PlayStation 3 at the end of the event with a teaser video, after Persona Q, Persona 4: Dancing All Night, and the home version of Persona 4 Arena Ultimax.

The official website for Persona 5 opens, after the domain was discovered in July 2013.

The “Persona Channel” is updated as a Persona hub website, after it was opened as the event teaser website in September 2013.

The full event itself, after the countdown which started on November 21, 2013, can be seen below.

Persona 5 is confirmed for a North American release date, with a slated release window of 2015 for the PlayStation 3.

The official English website for the game opens as well.

Atlus USA PR manager John Hardin states that they are working on Persona 4: Dancing All Night, Persona 4 Arena Ultimax, and Persona 5 to be released in NA close to the JPN releases. 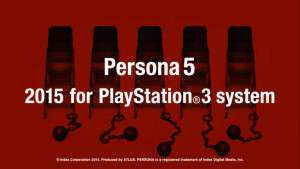 In a Game Informer interview with Shigenori Soejima, he has the following to say about the game:

He hopes people appreciate new things and that Atlus can continually do something that other companies can’t do. He hopes for Persona 5, “people see the new thing I’ve done and think that’s awesome.” He also teased that Atlus should be able to release [new information] pretty soon for Persona 5.

A new teaser trailer is shown for Persona 5 at the SCEJA 2014 press conference. The game is announced for the PlayStation 4 in addition to the PlayStation 3, and the game is officially delayed from “Winter 2014” to “2015” in Japan.

Atlus confirms that, at their Tokyo Game Show 2014 stage show, the latest Persona 5 trailer will be analyzed by the hosts of the Persona Stalker Club talk show on September 20th. 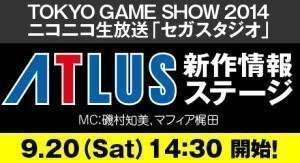 In a US Gamer interview, Shigenori Soejima has the following to say about his involvement with Persona 5:

Persona 5, compared to the other titles that have been announced..,” he muses, “I’m involved in it much more than just the character designs. But I can’t really talk about that now.”

Atlus announces a concert by the name of “Persona Super Live 2015: Night of the Phantom” for February 5, 2015, with a 76-day long countdown and a teaser website.

The teaser website’s aesthetic is reminiscent of Persona 5‘s. 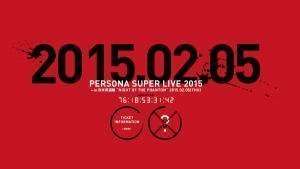 Persona 5 is potentially teased for a PlayStation Experience 2014 appearance from a tweet by SCEA employee Shane Bettenhausen. The tweet in question was soon deleted after it was posted. 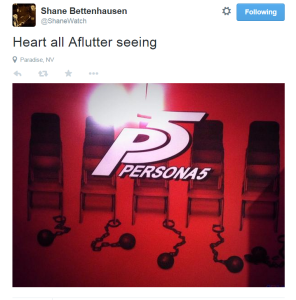 The PlayStation 4 release of Persona 5 is confirmed for North America at the PlayStation Experience 2014 keynote, and the game is stated to release in NA “following the Japanese release.”

Atlus USA PR manager John Hardin reaffirms the 2015 release date for the game (omitted from the keynote), and an Atlus USA channel release of the SCEJ trailer of September 2014 is uploaded. 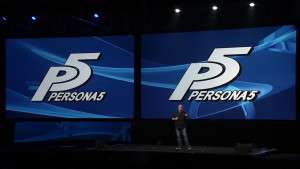