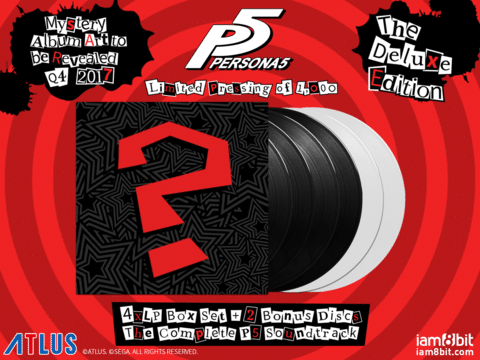 Persona 5 is a massive and epic opus of a game – the kind of 100-hour-plus JRPG journey that it is impossible to peel away from.

Quite simply, Persona 5 is one of our favorite videogame soundtracks to date.

We’re so proud to be releasing the Persona 5 soundtrack that, together with Atlus and SEGA, we decided to do something a rather radical – we’re going to document and share the entire process of creating a vinyl album with Persona 5 fans, from start to finish.

Fans will be given a rare peek behind-the-scenes – via video, photos and interviews – showcasing every detail involved in making a record. This includes:

This making-of adventure will take many months, with albums shipping in Q4 2017, in time for the holidays.

Please note: because we’re involving you in the production process, you’re literally coming along for the ride with us. You’ll receive production updates approximately once a month until your order ships. We’ll even have some fun surprises along the way! This is gonna be fun!