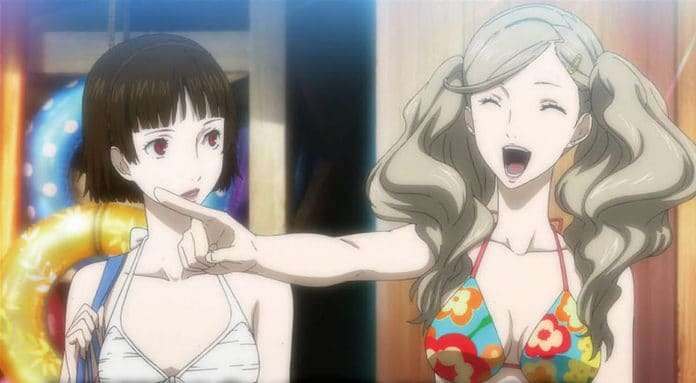 The official website for Persona 5  has been updated, revealing the Phantom Thief outfits for the characters from the June 2016 Famitsu feature, along with their respective arcanas.

The update also includes an update to the Cooperation character page, with the protagonist’s team members as characters he’ll be able to form relationships with, and updates to the “Student Life” and “Thief Life” pages with new screenshots.

Each of the main characters’ official pages have had a button added to them for “Thief Clothing Ver.” and “Uniform Ver.” This switches their regular uniform outfit renders to official ones for their Phantom Thief selves.

Additionally, the Cooperation page has been updated to include the main characters who the protagonist will also forge relationships with, in addition to the previously revealed NPC characters.

This also has reveals their respective arcanas:

The description via Gematsu:

Cooperation Characters are some of the various people that the protagonist and friends will meet, whether in school or in the city, who possess special abilities and skills. Their interests will align with yours, and by building up a relationship of mutual trust, you can establish a cooperative “Co-Op” relationship with them. By deepening your bonds with cooperation characters, you can use their abilities to better go about your life as a Phantom Thief.

Each member of the Phantom Thieves has also been given an “honorary title, which Domi on Tumblr has translated:

The School Life page has been updated with a description of the kinds of events players will participate in during daily life.

During the day, you’ll attend school as a student. In the morning, you’ll commute to school by train. On days that you’re lucky and get a seat, you can make use of the time by reading. At school, you’ll actually take classes. And if you meet certain conditions, it’s also possible to skip class…

From ball game tournaments to seaside cultural festivals and field trips, there are all sorts of events for each season that you can participate in during your school life.

Finally, the Phantom Life page has been updated with a section describing the battle system in the game. This includes new screenshots.

The Palace is filled with guard-like beings called “Shadows,” which protect the dungeon’s treasure. You can start battles by sneaking up on these Shadows. In addition your weapon, there is the inner power known as the “Persona.” The main characters, whose “Persona Capabilities” have awakened, will use their Personas, their own alter egos, to defeat their enemies.

(Shadows are the “embodiments of human emotions,” twisted by the distorted desires of the Palace’s master. Operating under the Palace master’s influence, Shadows will ambush the main characters.)