Last month, a Persona 5 collaboration with the free-to-play mobile RPG based on Japanese slang word puzzles Kyoutou Kotoba RPG: Kotodaman was announced. Today, Sega Games has announced that the collaboration event will be taking place from March 5 to March 28, 2019.

For the collaboration a “5-star Morgana” will be distributed as a gift to everyone, which can be evolved through collaboration-only quests. Additionally, there will be quests with strong enemies who appear in Persona 5, who are the targets of the Phantom Thieves’ calling cards in the original game.

A 1-hour live stream for the collaboration event will take place on March 4 at 9:00 PM JST (5:00 AM PST / 7:00 AM EST), where the latest news on this collaboration will be presented.

Update: Art for Caroline & Justine was shown during the live stream. 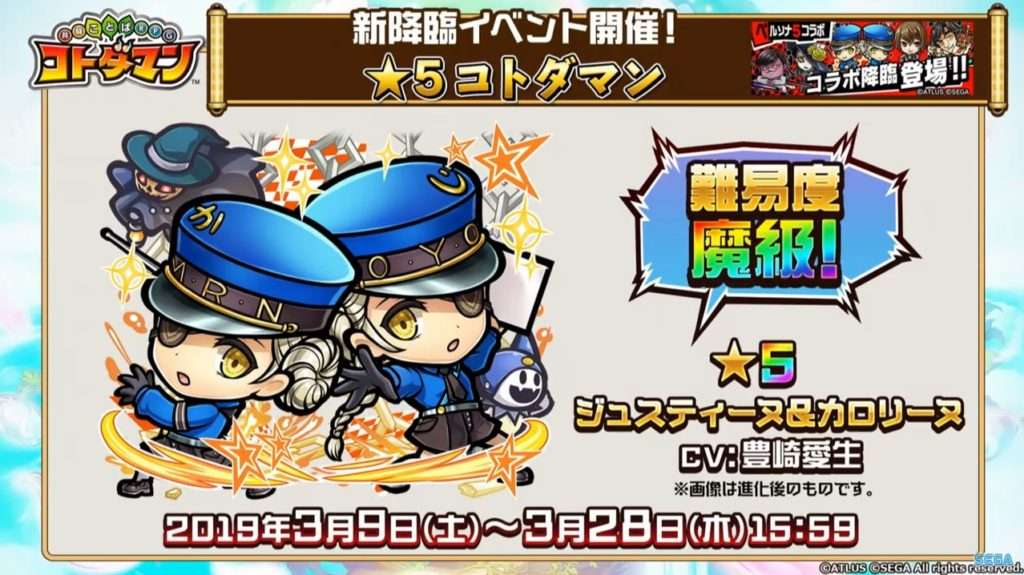 Morgana will be distributed as a gift upon logging into the game during the collaboration period of March 5 to March 28.

During the collaboration period, the seven members of the Phantom Thieves along with Morgana will appear as “Kotodaman,” and players will also receive “Leblanc Curry” which can be traded in for items as a gift. The characters’ regular forms turn into Phantom Thieves upon evolution.

During the collaboration event, strong enemies will appear in special quests. Defeat them to have them join as “Kotodaman.”

Caroline & Justine are teased as an enemy that will appear on March 9th during a special stage with a degree of difficulty.