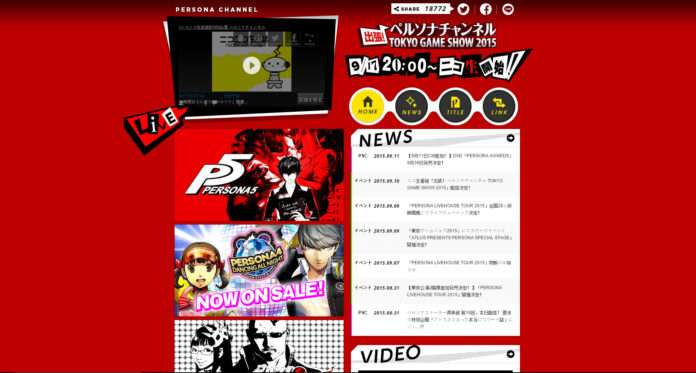 Atlus’ official Persona Channel website has been updated with a revamped (i.e. “red”) look and a video embed for the upcoming “Business Trip! Persona Channel TOKYO GAME SHOW 2015” live stream, which span a period of over 40 hours.

Additionally, the official Japanese Persona 5 website has been updated with news links for the upcoming TGS 2015 Persona live stream. This follows the update for the TGS 2015 teaser website for Persona 5.

The live stream event will start on September 17th at 8 PM JST (4 AM PDT / 7 AM EDT). See the TGS 2015 Persona event schedule guide to see the complete time table and event descriptions.

Persona 5 is set for a PlayStation 4 and PlayStation 3 release in Japan in 2015. The anticipated RPG is also set for a 2015 release for the PS4 and PS3 in North America.

Tokyo Game Show 2015 starts on September 17th and goes until the 20th. Prior to that, SCEJA had their annual pre-TGS conference on September 15th where Vanillaware’s 13 Sentinels: Aegis Rim was announced.