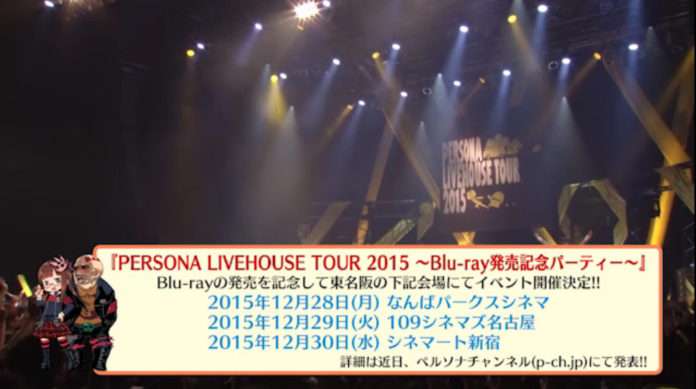 The “Persona Livehouse Tour 2015 ~Blu-ray Launch Party~” was announced during episode 20 of the Persona Stalker Club, and further details about the event have surfaced.

To celebrate the release of the Persona Livehouse Tour 2015 Blu-ray disc on December 30, a launch party will be held at three locations in Japan: Tokyo, Nagoya and Osaka.

The musicians who held the concert tour will be present during these launch parties. If one has an admission ticket and also is a purchaser of the Blu-ray, fans will be given the opportunity to meet and have a handshake with the performers after the event.

The main content of the launch party will be a mini talk show held by the music artists, followed by the handshake meeting with fans.

The “Persona Livehouse Tour 2015” concert took place in Tokyo, Osaka and Nagoya in September 2015 and managed to sell out the venues, being a great success. The final performance even had showings in 28 Japanese theaters.