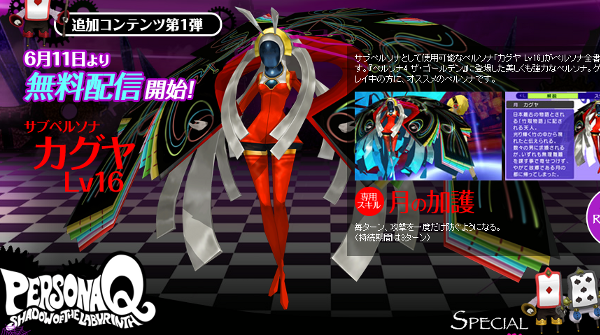 Persona Q: Shadow of the Labyrinth, which launched in Japan on June 5, will be receiving two free downloadable Personas from the series to be used as sub-Personas.

On June 11, 2014, the level 16 Persona Kaguya from Persona 4 Golden will be made available for download  She has an ability called “Moon’s Blessing”, which lasts for three turns and nullifies the damage of a single attack per turn.

On June 18, 2014, the level 26 Persona Orpheus Telos from Persona 3 FES will be made available for download as well. He has an ability called “Harp of Renewal”, which regenerates the party’s HP and cures all status effects for a duration of three turns.