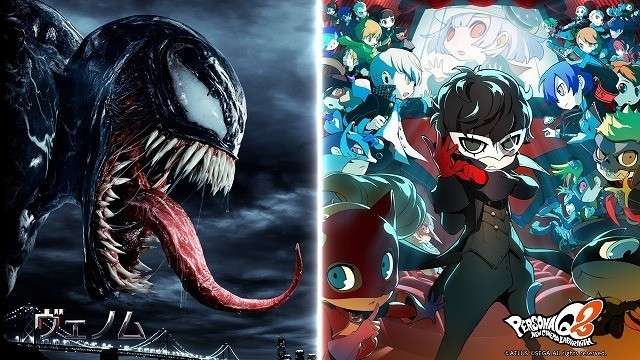 The Japanese theatrical release of Marvel’s latest film Venom will be on November 2, 2018. Atlus’ Nintendo 3DS game Persona Q2: New Cinema Labyrinth will be released close to the movie on November 29th.

To go alongside these upcoming releases, two collaboration videos with  Persona Q2 and the latest anime adaptation Persona 5 the Animation have been released.

The voice actor for Theodore in Persona is the Japanese dubbed voice for Eddie Brock in Venom: Junichi Suwabe.

This collaboration was brought about because the heroes of both works live a dual life, having personas they show off to the general public and a hidden form (Venom / Phantom Thief). They also both have special abilities (Symbiote / Persona).

The collaboration videos are meant to emphasize this duality for both protagonists, with the reporter gaining a second self through the parasite in Venom, and a hero who acts as a high school student and a thief in Persona 5.