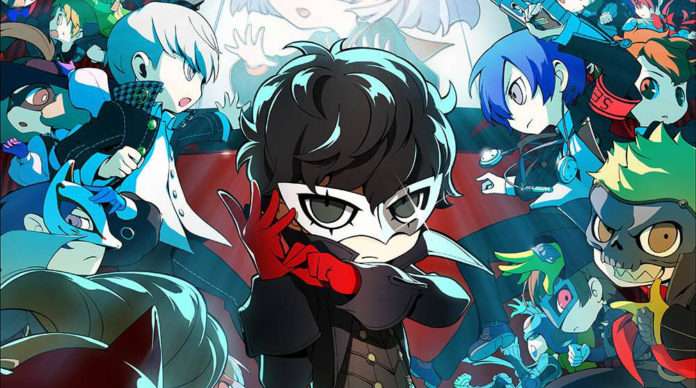 Atlus has released a large number of direct feed screenshots for the upcoming Persona Q2: New Cinema Labyrinth, as part of a Japanese press release.

The dream meeting of Persona 3, 4, 5! Welcome to the movie world (Labyrinth).

The latest RPG in the Persona series! A new storyline in Persona Q, this time focusing on P5.

The most number of party members in the Persona series with a total of 28 people!

A dream RPG where P3, P4, and P5 characters meet to unravel the mystery begins!

What is Persona Q?

The Persona RPG crossed with the systems of Etrian Odyssey, which can be fully enjoyed with the Nintendo 3DS!

Form your own party!

Switch Personas for a variety of tactics!

Conquer the dungeon while drawing a map

The leader of the Phantom Thieves. He can switch personas with the power of the wild card. 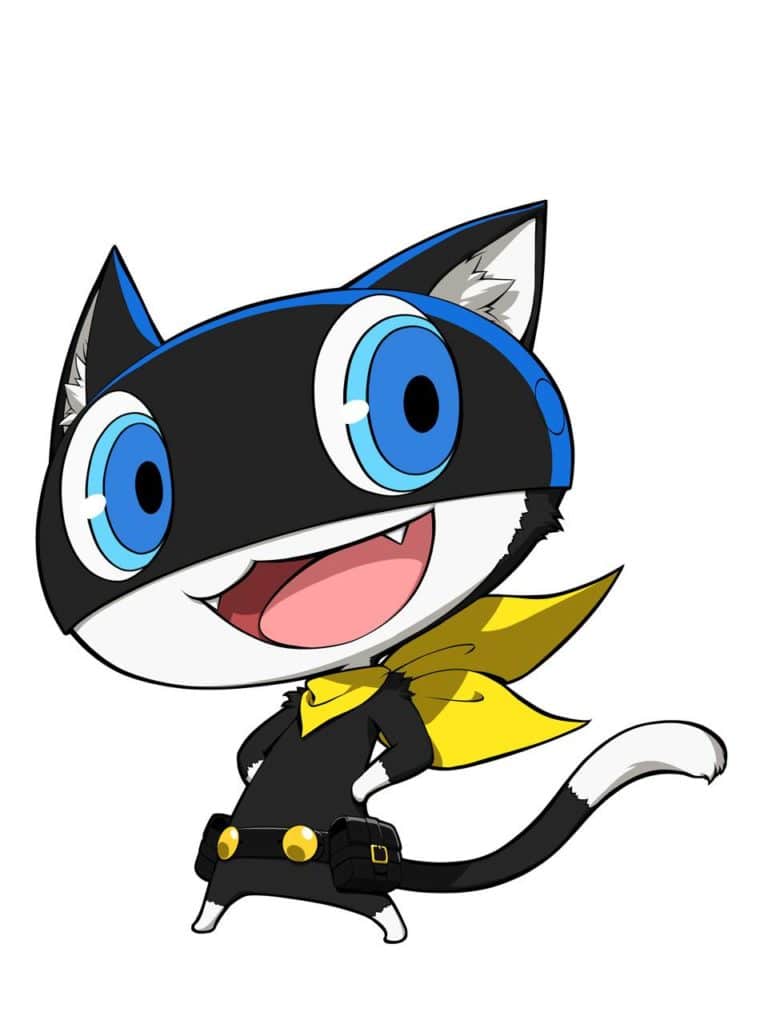 A black cat whose existence is a mystery…? Loves treasure and has the heart of a thief.

The lead marauder of the Phantom Thieves. He is irritable and has a rough behavior and speech, but he is kind and gets things done.

A pretty girl who is a quarter American. She has a straightforward and honest personality.

Because of his unique sensibilities, he is a little offbeat. This game will also be full of his antics.

Keen, collected, and with a strong set of morals, she is a natural honour student who serves as the student council president.

The daughter of the president of a major restaurant franchise. She has an elegant and gentle appearance, but she is a little naive about the world.

Despite being a high school student, he is also an ace detective. He demonstrates his deductive powers even as a member of the Phantom Thieves. 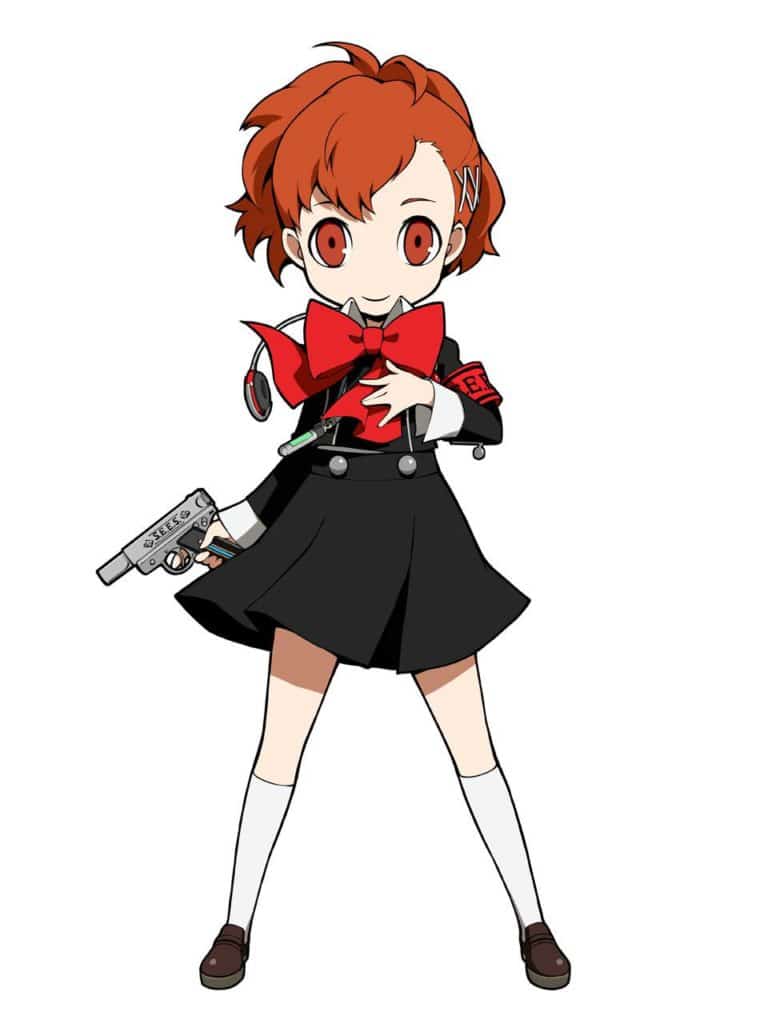 Another main character that can be selected in Persona 3 Portable, released for the PSP in 2009.

She is a key figure who is greatly involved in the game this time!? 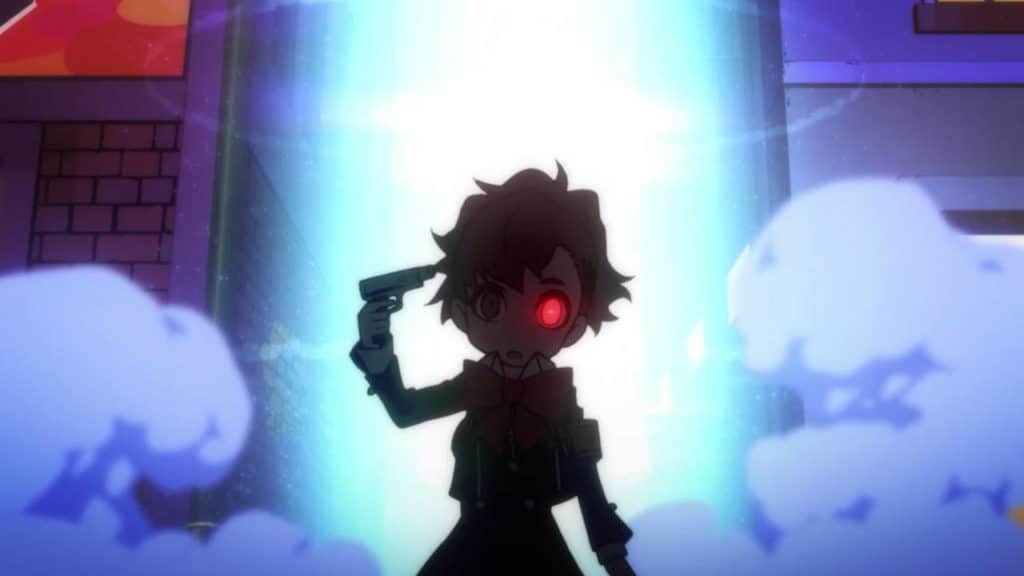 The characters find themselves trapped in a movie world. Is it one girl who holds the key…?

The Phantom Thieves were exploring Mementos one day, but they suddenly lose control of the Morgana Car and are sucked into a mysterious space.

The place is an unknown location, and the characters find themselves in a town where enemies they’ve never seen before roam.

Managing to escape, the Phantom Thieves find themselves in a strange movie theater without an exit.

There, they find a black-haired girl in white clothes called “Nagi,” and a despondent girl called “Hikari.”

Lost in a movie theatre without an exit.

People with the same power meet, as if they were guided by something.

Their encounter strengthens them.

The two women encountered in a mysterious cinema

Hikari and Nagi meet up in the movie theater where the Phantom Thieves get lost.

They cannot hide their surprise as they come out of the movie. 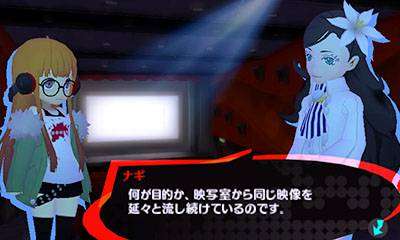 Who is in the projection room…? 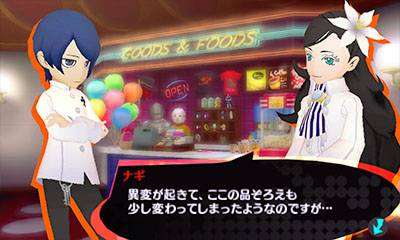 Nagi says that the shop is different from what it was before. It seems that there’s something useful for the Phantom Thieves.

The mysterious creature in the screening room…? 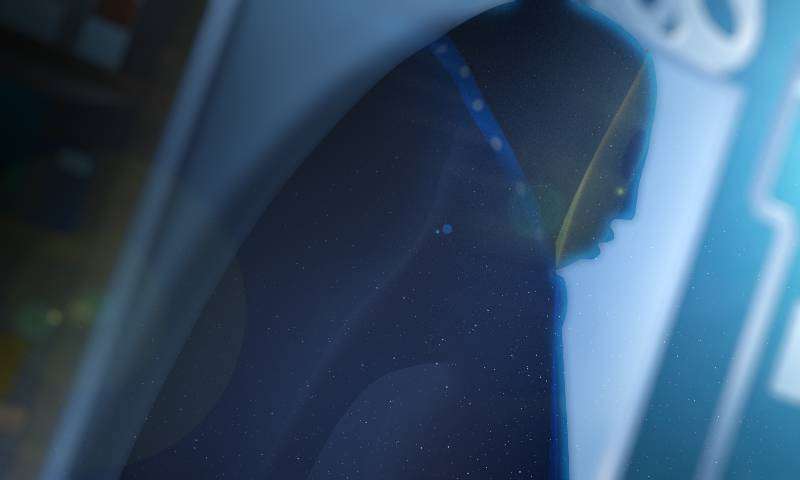 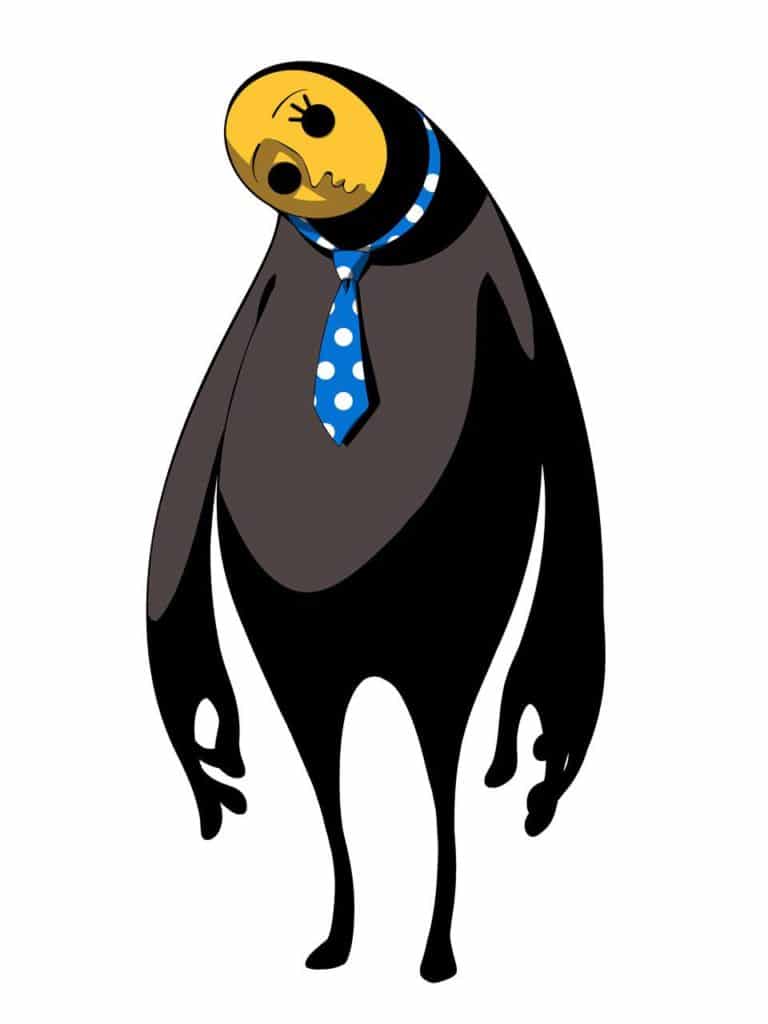 A strange creature in the projection room. It shows movies to Hikari and Nagi. It never talks when spoken to or responds to touch. 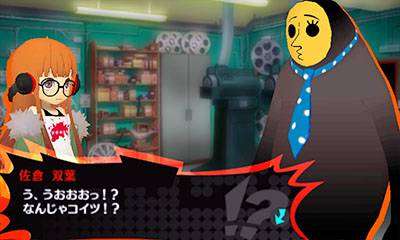 What was in the projection room was not a person, but a strange creature. It seems that he (?) is the one behind the movie. 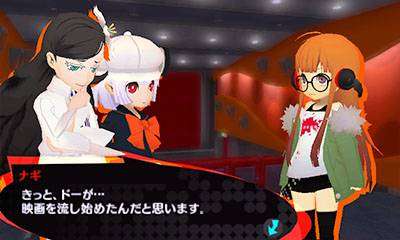 For what purpose is Doe keeping the movie running…? 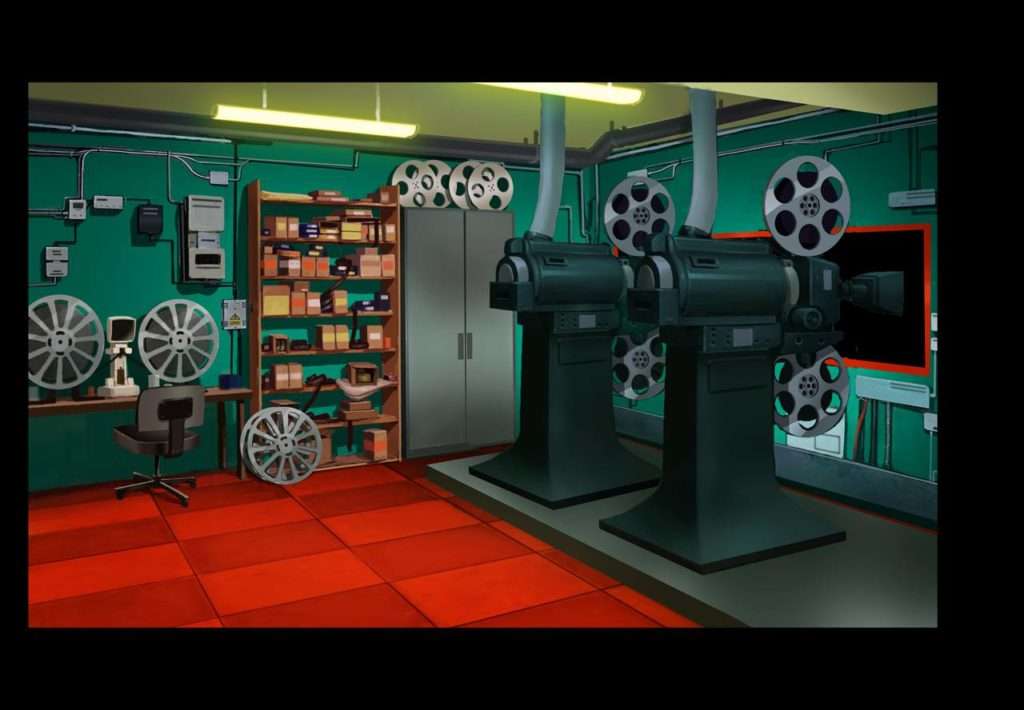 Battle songs in the game can be changed to other music from the series! 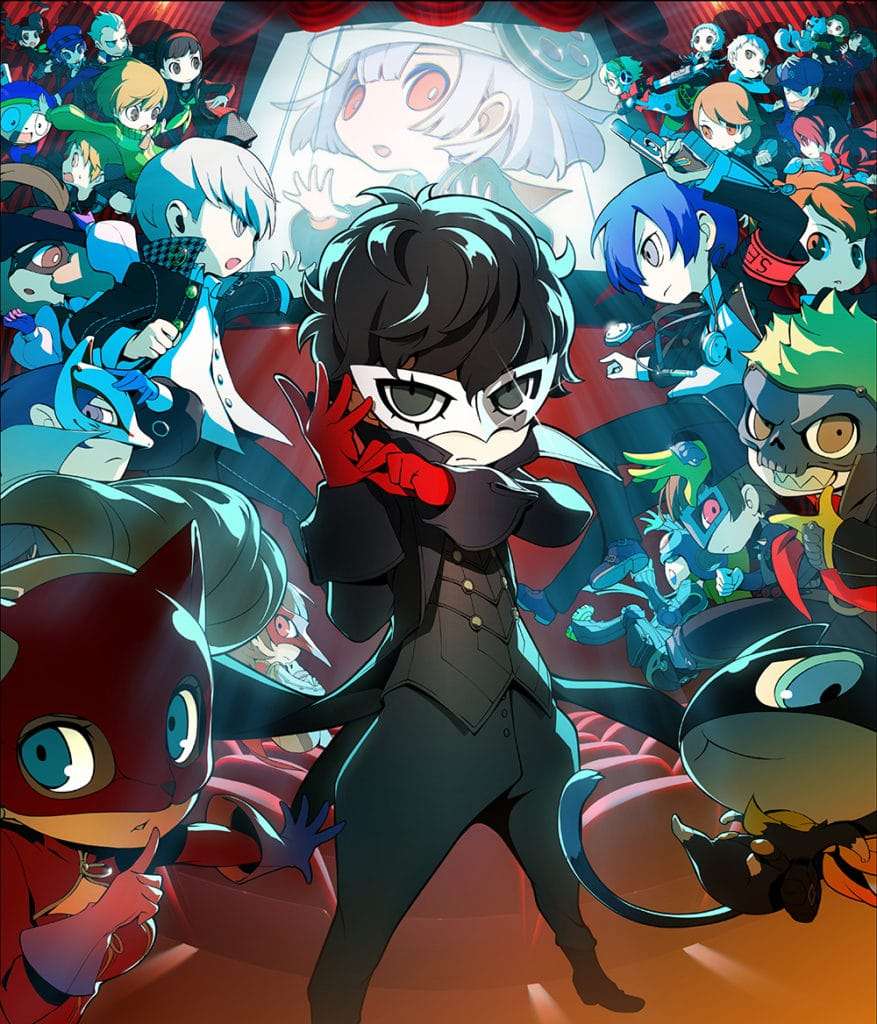