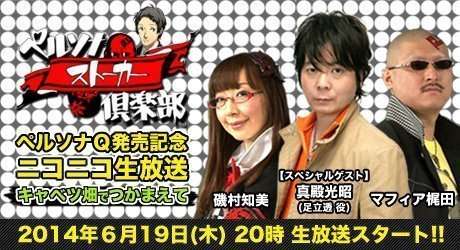 A fifth Persona Stalker Club episode with character Tohru Adachi as its focus has been announced to air on June 19 at 8 PM JST.

Japanese voice of Persona 4 character Tohru Adachi, Mitsuaki Madono, will be making a special guest appearance on episode #5 of the Persona Stalker Club talk show next Thursday. This upcoming episode will also be celebrating the recent release of Persona Q: Shadow of the Labyrinth.

The episode will be live streamed via Niconico.