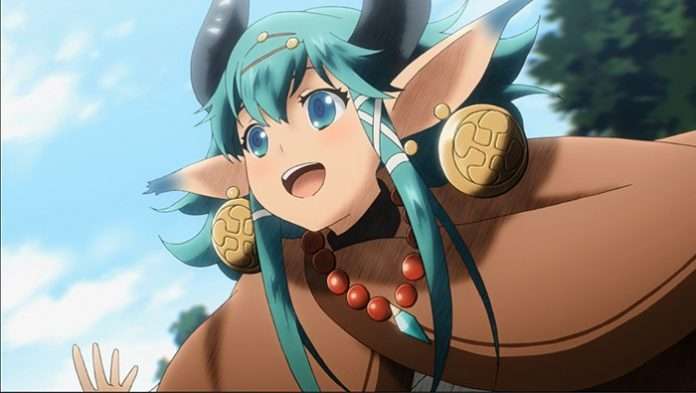 Additionally, there is new information concerning the “Sub-History” timeline added to this remake, and a new “Support Skill” system.

Gematsu has translated the information from the press release, with most character and world descriptions taken form the official English website for the first Radiant Historia:.

A simple society formed by the Satyros in the forests cast of Alistel and led by their Patriarch Barranca. The Satyros have power over Mana and are protected by a holy tree suffused with it. The Satyros that love to dance are mainly jovial and filled with curiosity.

Over the centuries, the Satyros have continued to isolate themselves from humans. However, in contract to the Gutrals, who have completely severed ties with humanity, the Satyros still enter human settlements from time to time and participate in cultural exchanges. Formally, though, Celestia has broken off diplomatic relations with humans; since the village of Celestia is protected by a magic barrier, humans cannot set foot inside.

The country of the Gutrals, led by their Elder, Galva. It is located to the southeast of the continent, deep within Abyssia Forest.

Unlike the Satyros, which rely on their mysterious powers to keep them on an even footing with humanity, the Gutrals take pride in their formidable physiques; any of them has power equal to or greater than the mightiest human warriors. Still, contrary to their appearance, the Gutrals are gentle and have honest hearts. They are deeply opposed to war and rarely ever resort to force.

This loose alliance of wanderers, drifters, and refugees was founded in the desert to the southwest of Vainqueur. Many were attracted to Cygnus by its policy of no-questions-asked acceptance, despite one’s race or personal circumstances. The laws of the land are lax, but one side effect of this is that quarrels tend to break out quite often and the citizens living there tend to be rather coarse.

Cygnus was once divided among various small, quarreling factions, but they all have been united by Garland, current king of Cygnus. The unified country has maintained a neutral stance in the feud between Granorg and Alistel, though Granorg’s constant interference means there is little love lost between the two nations. 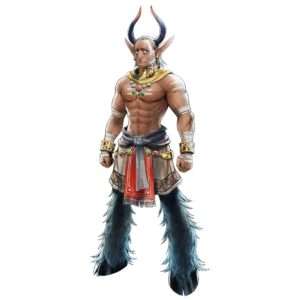 The leader of a troupe of travelling performers which includes Aht and Liese, he is always a gentleman and acts as Aht’s “Uncle Vanos.” He seems happy with his life as a wandering performer, but he is personally acquainted with the Patriarch of the Satyros, and seems to have his own agenda… 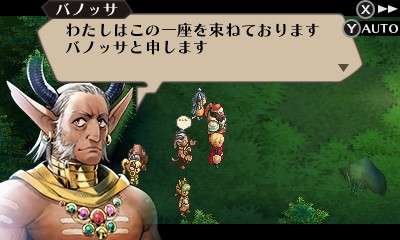 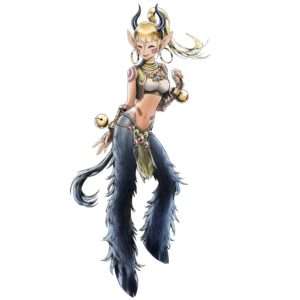 A Satyros dancer who acts as an older sister and caretaker for Aht in Vanoss’ troupe of travelling performers. She is affable and taklkative with a generally sunny disposition. Though she is a Satyros, she shares Aht and Vanoss’ warmth towards humanity. 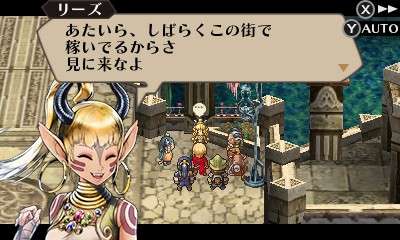 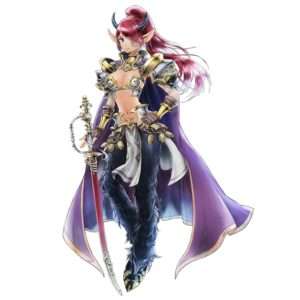 The most skilled warrior in Celestia, and the proud leader of Celestia’s Vigilante Corps. She has a high hostility against humans. That stubborn attitude seems to be the result of an incident that occurred in the past… 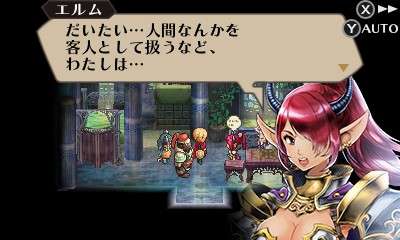 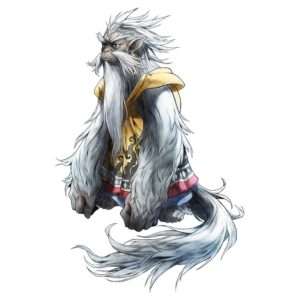 The Gutrals’ Elder, said to be well over 150 years old. He is one of few living beings of who know of the continent’s history.

Because his race has been deceived countless times by humans, resulting in the loss of many of his kind, he is not kindly disposed towards humans and limits his people’s contact with the outside world to a bare minimum. At his insistence, the Gutrals are mere observers in the war between Alistel and Granorg. 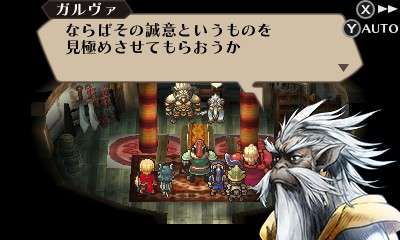 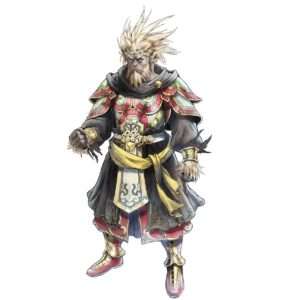 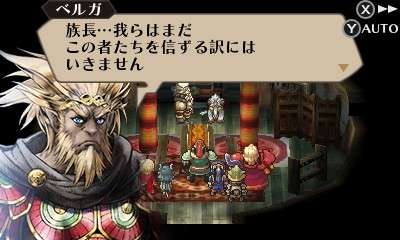 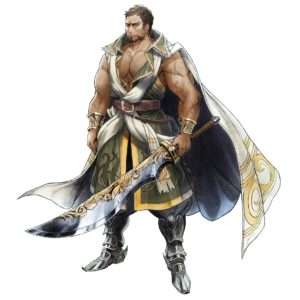 The king of Cygnus, nicknamed the “Desert Tiger.” Even before taking the throne, he was known as Cygnus’ strongest mercenary. He was the natural choice to unite the vagabond empire due ot his courage, grace, magnanimity, and strength.

He’s an honest, chivalrous man who hates to do wrong and values the golden rule above all. Outsiders typically assume that a man of his background would rule with an iron fist, but he always takes into account to opinions of his subjects and works hard to shape an orderly Cygnus form the chaos of its constituent parts. 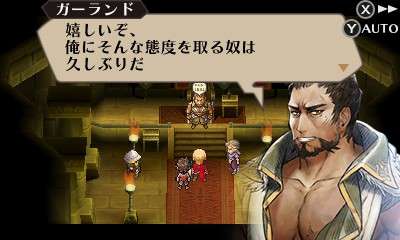 The 3DS remake of Radiant Historia includes the additional “Sub-History” scenario, in which Stocke meets the mysterious historian Nemesia. 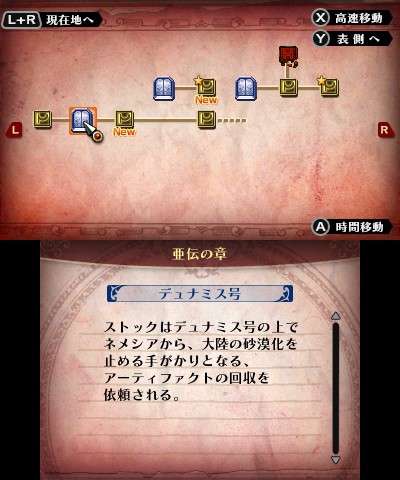 In the “Possibility World,” which you will visit in search of Artifacts, Rosch, for example, has become a general, and you can see sides of characters that you couldn’t see in the original histories.

Radiant Historia: Perfect Chronology uses a deep turn-based command battle system familiar to RPG fans. Enemies are arranged on a three-by-three grid, and by blowing them back, you can change their position. The “Change” command, which lets you change the turn order, is also one of the battle system’s characteristics. 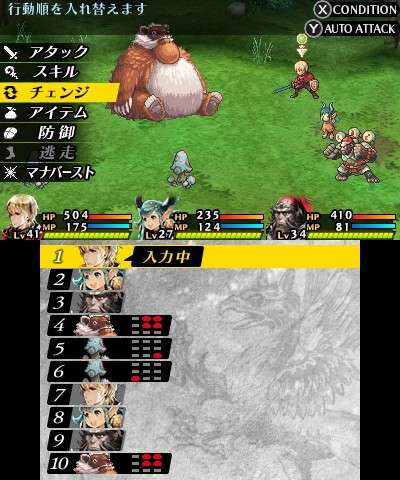 Change Connecting to a Combo 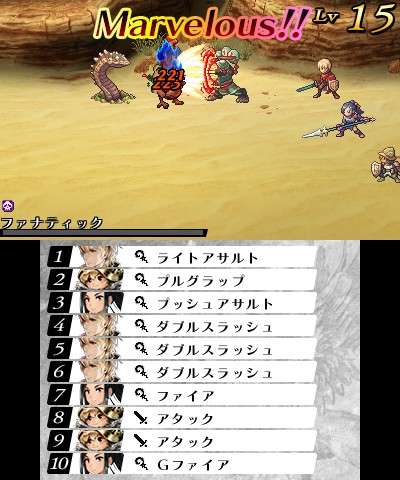 “Combos” occur when ally attacks connect. By skillfully using the “Change” command, you can connect these combos. Combos gradually increase the amount of damage dealt, so when fighting against formidable enemies, you should aim for a combo.

When your “Mana Burst Gauge” fills up to its max, you can unleash a “Mana Burst,” which is a very powerful skill. As you progress through the story, each character will learn new “Mana Bursts” one by one.

“Support Skills” are a new element in the 3DS remake of Radiant Historia.

It allows characters that aren’t participating in battle to jump in and unleash a “Support Skill” to lend a hand in combat. There are various skills, including those that deal damage to enemies and those that exhibit support effects, and they don’t consume MP. Various Support Skills are being prepared for each member of the party, which can be learned by leveling up and obtaining items.