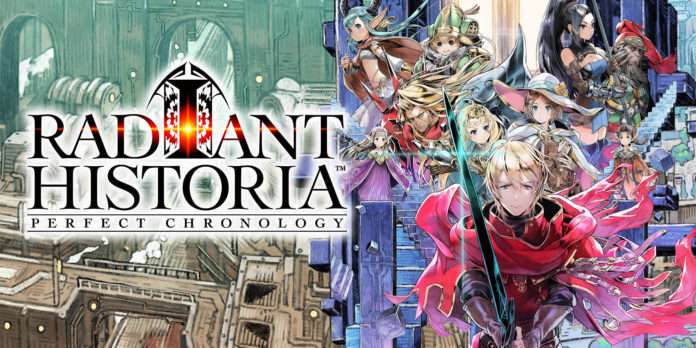 “If only I could go back in time and make a different choice.” It’s a thought that i’m sure most people have had at some point in their lives, which is only natural, considering we have one life to live and regrets can run deep. That said, what if we could go back in time and change a decision? This idea is the engine that Radiant Historia: Perfect Chronology runs on, and ultimately to great success. It’s a game about using time travel to solve immediate problems, but it’s more than that. The game uses time travel as a springboard to tackle a variety of subjects, such as extreme patriotism, religious fanaticism, idealism and altruism. It’s a dense game, and despite the relatively modest runtime (it took me 40 hours to beat it) you’ll be experiencing quite a bit of content.

The story centers around the conflict between nations, Alistel and Granorg. Alistel is a technologically advanced society with a huge emphasis on religion, whereas Granorg is a comparatively old fashioned and proud kingdom that heavily revolves around its monarchy. Both of these kingdoms are well textured, and the game manages to avoid painting one kingdom as inherently more evil than the other. Instead, the game puts onus on greed and corruption, and argues that individuals who are in power are the root of every problem (which is of course, extremely true to life). 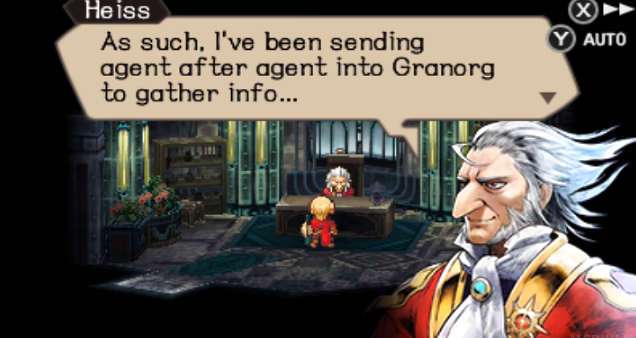 The game puts you in the shoes of Stocke, a young man who’s a part of Alistel’s Special Intelligence division. Right off the bat, the game flips the script on the usual RPG set-up. Instead of being a plucky teenager or some warrior, you play as a secret agent, one who primarily deals in information gathering, stealth and covert operation. Stocke is a solid lead; he’s clever, efficient and resourceful, but not completely invincible. His growth from unemotional soldier to someone genuinely concerned about the world’s affairs is well executed. The rest of the cast fares just about as well. Party members such as Marco and Raynie seemingly serve as your archetypal plucky sidekicks, but have a surprising amount of depth to them. Rosch is a reliable and steadfast old friend who experiences a satisfying character arc. Eruca’s the standard princess, but there’s an inner strength and maturity that sets her apart from your usual plucky princess, and I really enjoyed the direction the game took with her. The game’s antagonists are also worthwhile characters. Each of them have their own varying motivations that extend beyond just “being evil” and the game does a good job of making you understand their worldview. I also can’t ignore the stellar supporting cast, as it’s filled with well realized and memorable characters (shoutouts to Heiss, General Raul, and Field Marshall Viola). Overall, the game is very strong on the character front.

You might be wondering how a game with time travelling as the central focus manages to tell a cohesive story. Fortunately, the game’s narrative manages to live up to its incredible ambition by mostly following a linear path. It manages to avoid the pitfalls typically associated with most time travel narratives by keeping things relatively understandable. Granted, understandable does not mean simple, as there’s quite a bit of meat to the story, but it never feels convoluted or confusing. It’s a solid story that delivers on its concept, and it’s not particularly difficult to play through either. 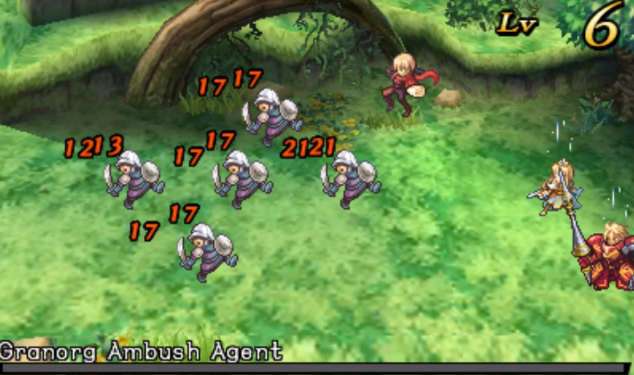 While impressive on the story front, there’s actually quite a bit of depth to the gameplay as well. You’re afforded a considerable amount of control in combat. For example, turn orders can be modified, enemy turns can be erased, and combos (having one character attack after another) can be set up to devastating effect. It’s possible to completely decimate enemies in a single turn with the proper set up. What keeps the game from getting stale is its fantastic difficulty curve. Enemies manage to consistently pose a threat, in addition to becoming harder to deal with as you progress. The pressure to consistently keep your party members up to date makes equipment more valuable, which further incentivizes doing quests. In addition, boss battles are generally well designed, and they usually demand more than just wailing on a boss until they die. Since boss battles tend to involve multiple enemies and/or gimmicks, you’re forced to reevaluate your usual strategies.

An example of this is that you might need to prioritize killing off a boss’ subordinates before chipping away at the boss itself, and in some cases, focusing entirely on the boss while ignoring its flunkies is a perfectly valid strategy. In general, utilizing status effects, buffs and mastering the combo system is absolutely vital to succeed, and the way Radiant Historia eases you into becoming proficient at the game is commendable. Despite the general challenge, I never felt that Radiant Historia was “unfair”, and the general ease of levelling up made it easier to come back to bosses after a loss. That said, if you find the game to be too difficult, or you simply wish to experience the story without having to worry about consistently upgrading your equipment, the new “Friendly” mode ends up being a fantastic solution. It instantly allows you to kill enemies on the map while obtaining experience, significantly hastening the overall pace of the game. 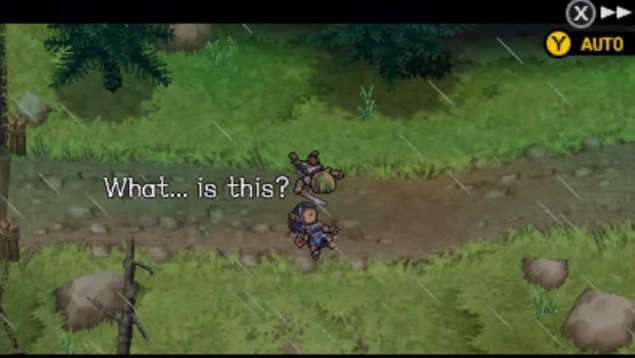 While the game’s pacing was mostly solid, there are times where I felt that the railroading could be annoying. It’s possible to get incredibly invested in one of the timelines, only to be forced out into the other timeline in order to proceed with the overall narrative. It’s not that frustrating, but it was still notable enough to mention. The soundtrack is fairly good, but the low amount of songs doesn’t really mesh with the game’s repetitive structure. Songs are repeated endlessly for many scenarios, to the point of being tedious. The soundtrack itself being just “fairly good” is also a disappointment in its own right, given how strong Yoko Shimomura’s soundtracks tend to be. 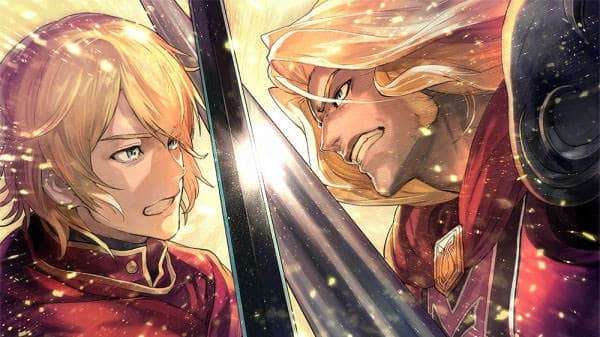 In terms of new content Radiant Historia: Perfect Chronology introduces full voice acting for the main characters. Every line (even incidental NPC dialog) is fully voiced acted, which is great because the voice acting is good and adds a great deal to the overall experience. The remake introduces a mini-map, which gives you a fairly sufficient layout of the area. It makes travelling much easier, and I honestly can’t imagine playing without it. The remake also adds a new dungeon: the Vault of Time. It’s a simple dungeon filled with enemies you encountered throughout your journey and it makes for a fantastic training ground. Killing monsters also rewards you with special currency that can be used to buy equipment and skills. These items scale with the game’s progression, so the equipment you can buy is always effective for the upcoming battles. It’s a great way of staying on top of things.

With all that said, it’s hard to ignore the elephant in the room here: the new designs. They were instantly divisive when first revealed, and for good reason; the old art style was unconventional and fresh. It suited the game’s tone, and was striking and memorable. The new designs almost entirely subvert this. Character features are softened, and everyone looks brighter, less harsh and more forgettable. The end result is an art style that slightly shifts the original tone, evoking something more of a standard RPG.  It’s not entirely bad, however, as the characters still look good, and some characters look better in the remake (Heiss in particular received a major upgrade), but it’s still somewhat of a disappointment. Fortunately, Atlus has included day-one DLC that restores the original artwork. 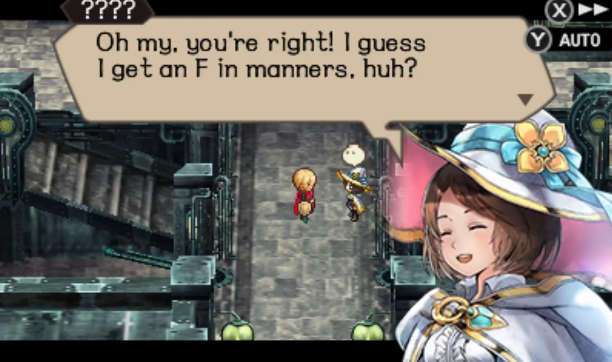 The new story content added to the game is a mixed bag; Nemesia is a decent character with a gimmick that may or may not click with you, but she’s not a particularly ambitious character. The same holds true for the recently added third timeline, which is a set of alternate histories that offer various “what if” scenarios. Sadly, they’re only amusing at best and cringe-worthy at worst. The writing takes a real nosedive in some of these scenarios, with characters being characterized in a much simpler (sometimes contradictory) way. This extends to the game’s new golden ending, which is far more saccharine and “happier” than the original true ending, to the game’s detriment. Radiant Historia was consistent with its tone, but the new ending clashes with the original content in a way that’s difficult to overlook. If you’re a sucker for that sort of thing, you might enjoy the new content, but personally, it did nothing for me.

Now, how you approach the new content is entirely up to you. You’re given the option to choose between “Append” mode (which sections off the new content to the post-game) and “Perfect Chronology” mode (which immediately gives you access to the new content). Perfect Chronology mode is naturally well suited to returning players, while Append is ideal for newcomers, though it’s not entirely open-and-shut. Choosing to go with Append mode isolates the new content to the post-game, and it’s an absolute slog to clear it at that point. On the other hand, going with Perfect Chronology mode can let you clear the new content at a consistent rate, but it arguably hurt the game’s pacing (not to mention the main narrative, considering the aggressively mediocre writing). It’s honestly a difficult decision to make, though I recommend sticking with Append mode if you haven’t played Radiant Historia before to get the truest experience. 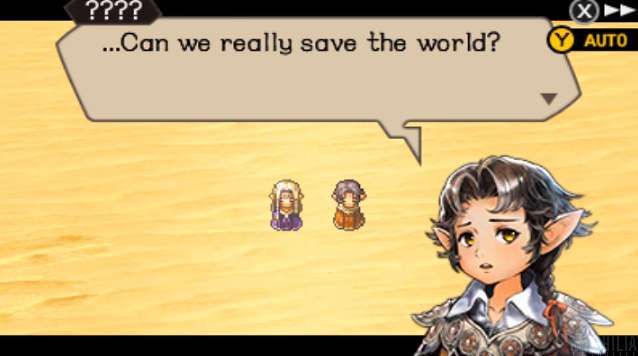 Radiant Historia: Perfect Chronology is a special RPG. It’s a game that puts you in complete control over destiny, making you the literal author of the story. It’s ambitious and unique, and offers a generally solid gameplay experience. The remake only improves on this front, improving on an already great game. While the new content might not live up to the original, it doesn’t severely detract from the core experience and it can be ignored if you want it to be. In any case, if you’re a fan of RPGs or good stories in general, then you absolutely can’t afford to miss this one.