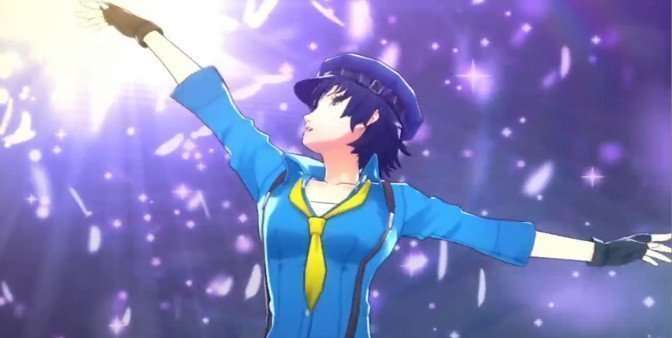 A few hints here and there seem to imply that Atlus USA is in the process of actively localizing Persona 4: Dancing All Night, that English voice actors are currently involved, and that the game might soon be shown off to a North American audience.

So I don’t normally write about rumors because a lot of them are unsubstantiated or are simply made up, but this one’s caught my attention.

I was first made aware that something was potentially going on with this Reddit post. It points to the comment section of this subbed Persona 4: Dancing All Night video, where reliable Youtube user bobrossfreak (aka freelance translator Thomas James) suggests that Atlus USA might be showing off the rhythm spin-off game in English soon:

The above could mean a lot of things, but it does indicate that we might be seeing the game sooner than later.

Next is something that was also referred to within that Reddit post, which is Persona 4 character Chie Satonaka’s current English voice actor, Erin Fitzgerald, hinting at something through a tweet on March 13, 2015:

Ooooohhhh fans are gonna be so pleased about what I am doing today! #ifitoldyouihavekillyou #youwantedmoreyourgettingmore

It seems to imply that she’s reprising her role for a character, and that fans will be happy about the work she’s currently involved with.

Finally is the last hint, which is a straightforward tweet—one made today—by Valerie Arem, the current voice actor for character Naoto Shirogane:

She could have just spontaneously felt like dancing at the moment she tweeted that, but it’s also likely to be another Persona 4: Dancing All Night localization hint.

Comparing this situation to Persona 4 Arena Ultimax‘s Atlus USA timeline and excluding the announcement trailer, we started hearing rumblings of potential P4AU voice work by Yukiko Amagi’s voice actor, Amanda Winn-Lee, on February 19, 2014, and the game’s first English showing was the following June. That was a space of four months however, this time, maybe we’ll be seeing the English version of Persona 4: Dancing All Night sooner than that.

Persona 4: Dancing All Night is slated for a Japanese release on June 25, 2015, and is scheduled for a 2015 release in North America.