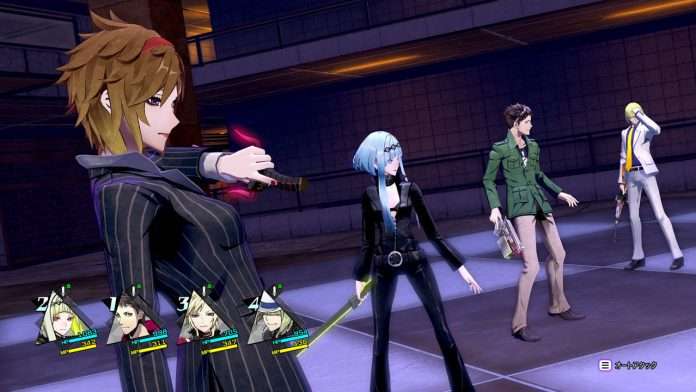 Featuring Atlus producers and directors Eiji Ishida and Mitsuru Hirata, parts of this interview discuss the ideas behind the development of Soul Hackers 2, as well as the game’s critical reception and its worldwide release.

Developing a Sequel After 25 Years

Hirata: It’s true that it’s been 25 years since the last “Soul Hackers” title, but in the grand scheme of things, this game is a continuation of the “Shin Megami Tensei” series, or “MegaTen,” so I didn’t really feel that it had been the first time in 25 years.

Ishida: I would like to start off by saying that, unfortunately, “Soul Hackers 2” has received harsh criticisms, and the whole team takes that very seriously. I would like to talk as honestly as possible today.

As Hirata mentioned earlier, “Soul Hackers 2” is a title that isn’t connected to the so-called “Shin Megami Tensei” games. In my case, I was directing “Shin Megami Tensei: Strange Journey Redux” and before that, “Shin Megami Tensei IV,” always making games that involved demons in some form or another. The world setting would change each time, so even though I was working on the same series of games, I felt that I was creating a new IP each time.

I believe that Atlus’ games are about “continuous change,” so as a “sequel to a new work,” it’s important to keep in mind the looming shadow of the previous game, while making changes that would  be appropriate with modern times.

Demand for a Sequel to “Soul Hackers”

Ishida: Atlus conducts a yearly survey in which we ask fans to participate, and there have always been requests for a remake of “Soul Hackers.” However, in order to truly deliver an experience that would meet the needs of the fans, we had to pull out the game’s core elements and update it for the present day, 25 years later.

Ishida previously mentioned how the number of requests in Atlus’ yearly surveys for a sequel to Soul Hackers was one of the main reasons Soul Hackers 2 was developed.

Ishida: Until now, the “Shin Megami Tensei” series has been more of a “story of the protagonist = myself without any background,” so I have not created much of a personal story. However, from “Shin Megami Tensei: Devil Summoner” onward, there’s been more color, the relationship between the characters has gotten stronger, as well as the people around them, and how the protagonist approaches and interacts with the society.

In “Soul Hackers 2,” the main character speaks, but I sometimes people wondered “Isn’t it different if they speak?” However we decided that the theme of “Soul Hackers 2” would be “heretics,” with an emphasis on the characters, and we tried to make the most of that.

The “Shin Megami Tensei” series was originally based on the concept of “creating new charm through change,” which lead to the birth of several derivative titles.

Hirata: We will accept the various opinions we’ve received from our users and will surely incorporate them into future development. By the time this article is published, we will have released a patch to improve the game’s pacing.

We’ve added a “dash function” and “battle speed mode,” adjusted the “skill inheritance when fusing demons” and “frequency of enemy appearances” to make dungeon exploration more comfortable. We’ve also added for new demons. We hope you will enjoy the new version of the game.

Ishida: This was my first experience [for a simultaneous worldwide release], but it was refreshing to hear opinions from the overseas audience in real time even before the game was released. The situation with overseas fans is a little different from that in Japan. There are quite a few people who started playing Atlus games with “Persona 5,” and the points of interest and reactions are different from those in Japan. However, it isn’t a matter of only listening to one side or the other, so I strongly feel that it’s a challenge for us to find ways to respond to them in the future.

On Dialogue Style Unique to JRPGs

Hirata: In the early stages of “Soul Hackers 2” development, one of the staff members expressed a desire to do a character conversation skit. If you listen carefully, it is exactly the kind of conversational drama inspired by “skits.”