During the “Tokyo Sabbath” launch live stream for Shin Megami Tensei IV Final, a collaboration between the game and fashion brand ankoROCK was announced. 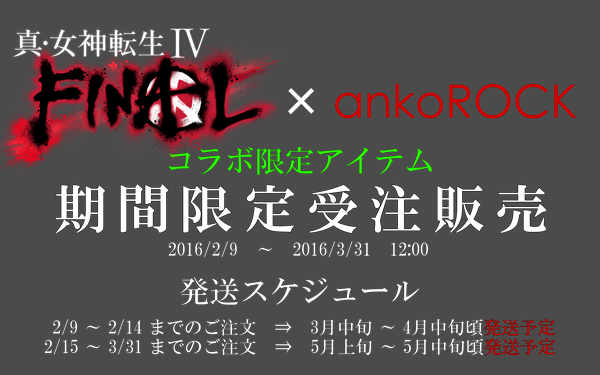 From February 9 to March 31, orders for ankoROCK collaboration clothes will be accepted in a limited capacity. The official website for the collaboration has launched as well.

Clothes for the collaboration include:

Exclusive zip-up hoodie with an elegant and soft gloss texture. Three patterns are part of the limited collaboration:

Loose T-shirts with the limited collaboration styles of the hoodies above.

Tighter versions of the “Mega Big” T-shirts above. Only the “Mushy Camouflage” and “Immediately Indelible” patterns are available.

Skinny pants with the patterns of the clothing above, without the Navarre pattern.

Leggings with the patterns of the clothing above, without the Navarre pattern.

Face masks with the patterns above.

A jacket designed to evoke the image of the fallen angel Lucifer.

Fingerless gloves designed to evoke the design of the hero’s emblem.

Shin Megami Tensei IV Final is slated to be released for the Nintendo 3DS on February 10, 2016 in Japan.