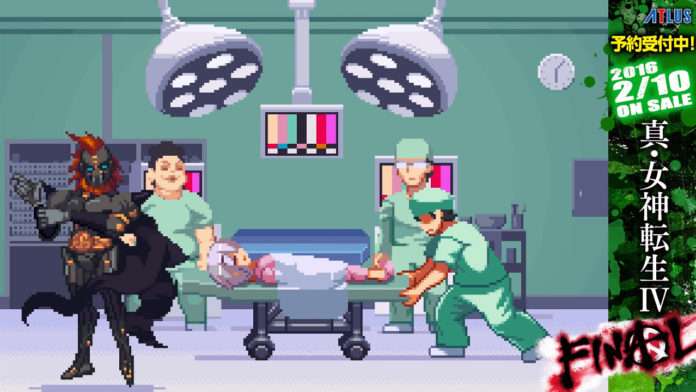 Atlus has uploaded the first in a series of Shin Megami Tensei IV Final “Mythology Videos” explaining the myth behind demons in the game.

This video is about the protagonist’s partner demon Dagda, who resuscitates him after he dies at the start of the game.

The narrator in the video is Japanese voice actor Hiro Shimono (voice of the protagonist).

The Irish-Celtic god of the earth and treaties, and ruler over life and death. Dagda, or The Dagda, (“the good god”) is one of the most prominent gods and the leader of the Tuatha Dé Danann. He is a master of magic, a fearsome warrior and a skilled artisan. Dagda is a son of the goddess Danu, and father of the goddess Brigid and the god Aengus mac Oc. The Morrigan is his wife, with whom he mates on New Years Day

The Dagda is portrayed as possessing both super- human strength and appetite. His attributes are a cauldron with an inexhaustible supply of food, a magical harp with which he summons the seasons, and an enormous club, with one end of which he could kill nine men, but with the other restore them to life. He also possessed two marvellous swine—one always roasting, the other always growing—and ever-laden fruit trees.

Additionally, a “Beginners” page has been opened on the official website to serve as an introduction to the game. Krishna is stated to be the subject of the next video in the “Mythology” series.