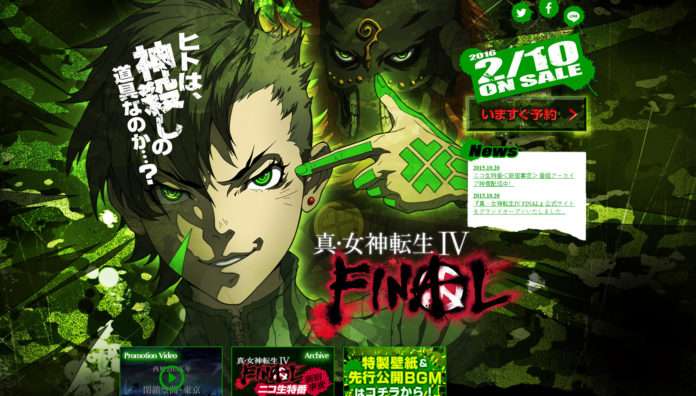 The official website for Shin Megami Tensei IV Final has fully launched, following the release of the teaser website on October 5th.

The revamped website features the protagonist and the demon Dagda in the main background, with character art and demon art below. There is also a short video from the PV#01 trailer played in the background:

There are six sections in the vertical layout: “Concept,” “Story,” “Character,” “Partner,” “Devil,” and “Survival.” See the complete overview of currently released Shin Megami Tensei IV Final information for what they entail.

The grand opening of the website has also brought a new section for news.

Via 4Gamer, new screenshots for the game have been released following the five from Amazon Japan.

An archive of the “Shinjuku Incident” (or “Shinjuku Disaster”) live stream which took place on October 11th has now been released by Atlus on YouTube and Niconico.

The stream featured live footage of an announcer at Shinjuku, Japan commenting on footage on a large screen, followed by the first trailer for Shin Megami Tensei IV Final and the first gameplay footage.