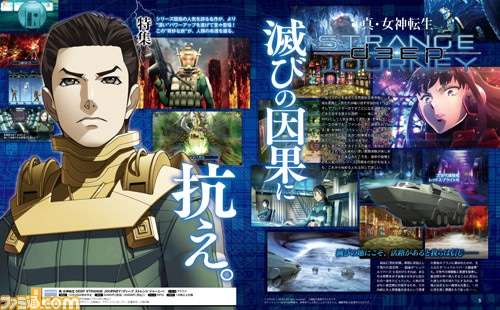 The newest Shin Megami Tensei game for the Nintendo 3DS, SMT: Strange Journey Redux (called “Deep Strange Journey” in Japan) has been announced for an October 26, 2017 release date in Japan.

The upcoming issue of Weekly Famitsu magazine #1492 will include a 12-page, “Schwarzwelt Investigation Correspondence Report” booklet on this remake of the original 2009 RPG.

The feature will include a large number of art and screenshots for the game’s demons (including new illustrations), as well as characters, and more, who appear in the game.

Front and back cover of the 12-page booklet included in the newest Famitsu magazine for the “Schwarzelt Investigation Correspondence Report” cover, which has the same size as the magazine. The back cover has a Demonic helmet made of cardboard which can be cut off.

Additionally, in commemoration of the 25th anniversary of the series, there has been announcement of plans to release a first production limited edition “Shin Megami Tensei: Deep Strange Journey SMT 25th Inauguration Special Box” with a number of bundled items that will make fans drool. Details are scheduled to be released on July 6, 2017 (pre-orders will begin as soon as each store is ready on the same day).

On July 9, 2017 at 7:30 PM JST (3:30 AM PDT / 6:30 AM EDT), there will be a live stream on Niconico celebrating the release date announcement. The latest footage and game information will be shown during the broadcast.