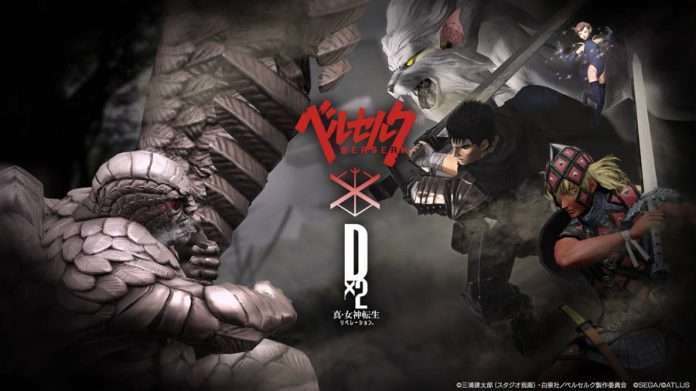 Sega has confirmed that the previously announced collaboration between the smartphone game Shin Megami Tensei: Liberation Dx2 and the TV anime Berserk (based on the popular manga by Kentaro Miura) will begin on May 28, 2020 and end on June 11, 2020.

Alongside this news, a trailer featuring the collaboration has been released, along with a special site and news of a live stream on May 25th.

The characters involved in the collaboration are the “Black Swordsman” Guts (voiced by Hiroaki Iwanaga), the young witch-in-training Schierke (voiced by Chiwa Saitō), the mysterious warrior Skull Knight (voiced by Akio Ōtsuka), and the antagonist Mozgus (voice by Rikiya Koyama).

The special collaboration website has been launched in English and in Japanese. The site will be updated over time with more information, including character profiles. Currently, the only profile is of Guts.

The “Black Swordsman” is armed with a prosthetic hand and a huge sword called the “Dragon Slayer”. His body is battered and bruised, but strong and tough as well, which helps him on his journey for revenge.

About the Berserk Anime

With an intricate story, fascinating characters, detailerd art style, and unpredictable turns of the imagination, Berserk is an impressive production that has, and will surely continue to capture the hearts of viewers all over the world. Its hero, Guts, lives in a world filled with magic, swords and monsters. His adventures have been read all over the world, selling over 40 million volumes of this Dark Fantasy Manga. Berserk (Authored by Kentaro Miura, published by Hakusensha) also got an Anime release between 2016 and 2017 and a video game tie-up published by Koei Tecmo known as “Berserk and the Band of the Hawk”.