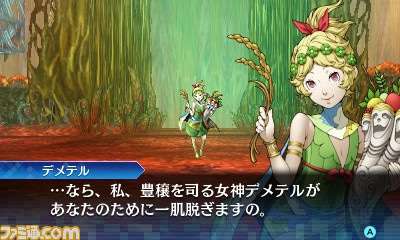 This week’s issue of Weekly Famitsu magazine #1495 will contain a new feature for Shin Megami Tensei: Strange Journey Redux, the 3DS remake of Strange Journey, originally released for the DS in 2009.

The world known as “Schwarzwelt” is bringing ruin to mankind, and the protagonist rushes in to investigate it, witnessing many demons and mysterious sights. The upcoming issue of Famitsu will highlight information on the demons and the battle system, as well as those who are part of the Schwarzwelt Investigation Team.

As seen above, the new(ish) demon Demeter—representing harvest—will appear in the game.