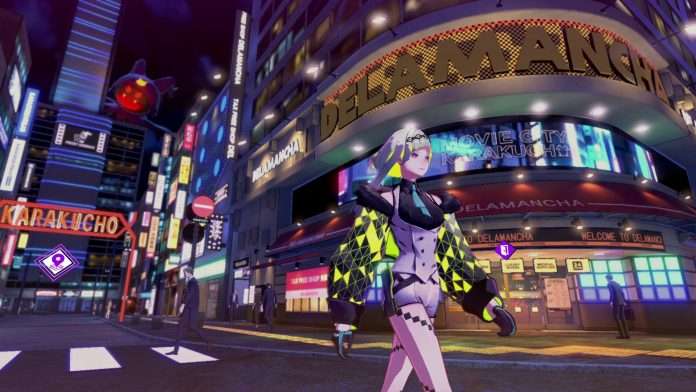 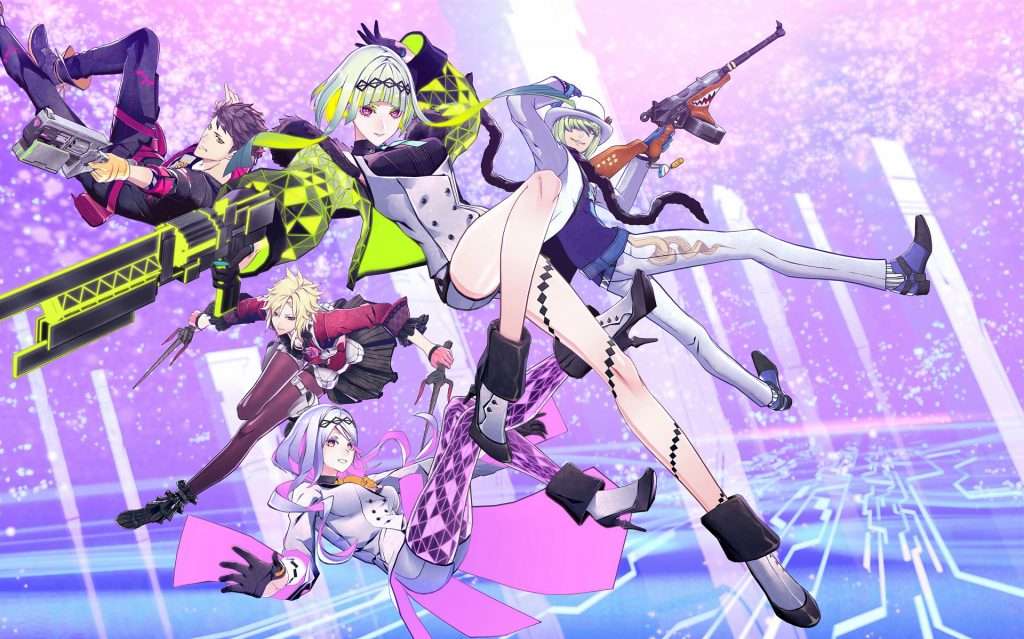 The main character, Ringo, is a member of the new life form called Aion. She joins forces with Devil Summoners to avert the end of the world. Using the Devil Summoner tool called COMP, Ringo summons demons to defeat her enemies.

In the secret cities called Realms that are invisible to the general public, there are places where you can fuse demons or modify COMPs.

Deepen your bonds with allies by interacting with them in bars and hideouts, and sometimes by going on Vision Quests that allow you to visit the ally’s past. 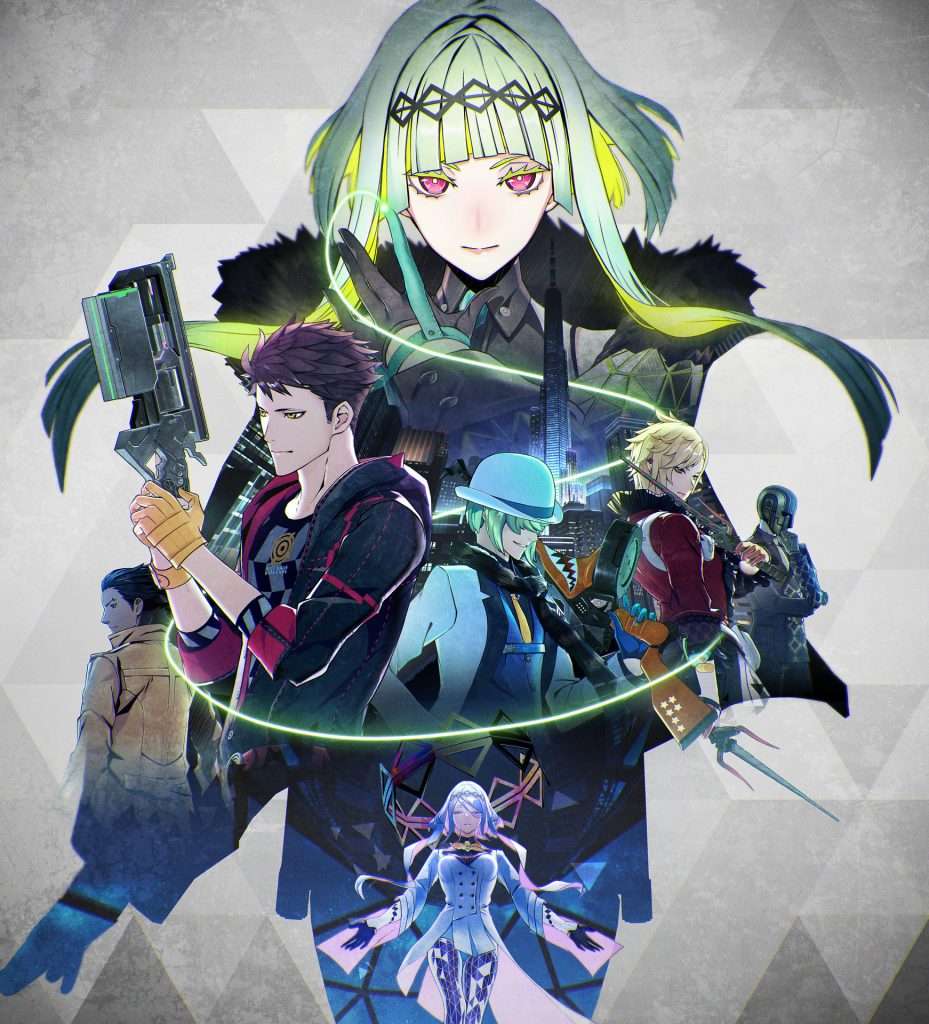 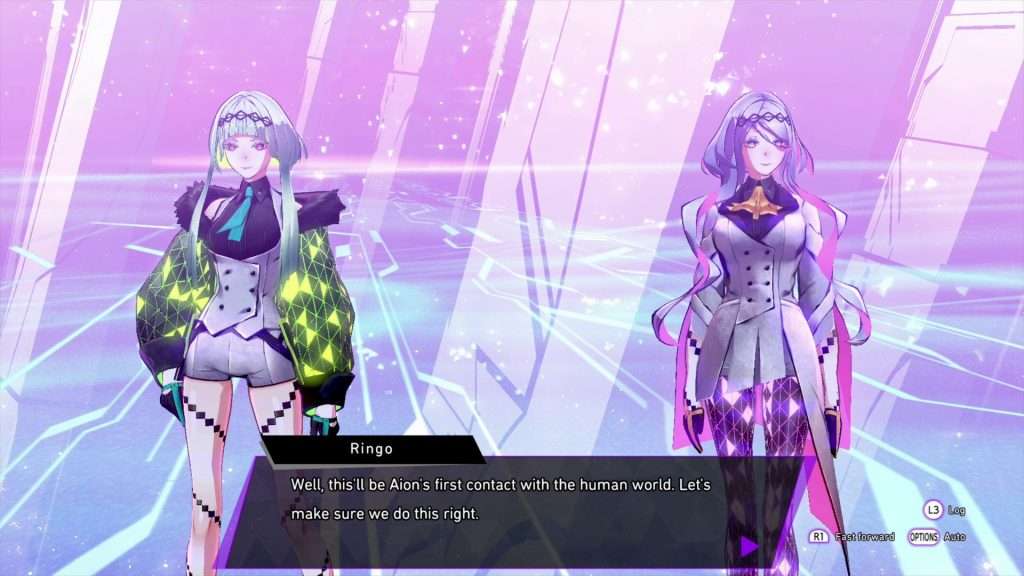 The story takes place in the middle of the 21st century, slightly further in the future than now. Devil Summoners, those who live in a society of darkness, use the power of demons to protect and support the world from behind the scenes.

Another side to this is Aion, an entity that watches over the world. These beings are born from the furthest reaches of technology, beyond human knowledge, and they detect the end of the world at a determined point in time.

Aion’s Ringo and Figue descend to the human world in order to avert the end. Their goal is to protect the people who are necessary to avoid the world’s destruction, however they have already been killed. Ringo performs a “soul hack,” a special ability Aion possesses to revive the subjects.

After being given a second chance, Ringo and Figue join forces with the other Devil Summoners to pursue a mystery with the fate of the world at stake.

One of the Aion agents, the next generation of electronic life form. A newly born being, she has a strong curiosity for society, culture, and human emotions. She stands on the front lines with Arrow and other Devil Summoners, working hard to avoid the end of the world. 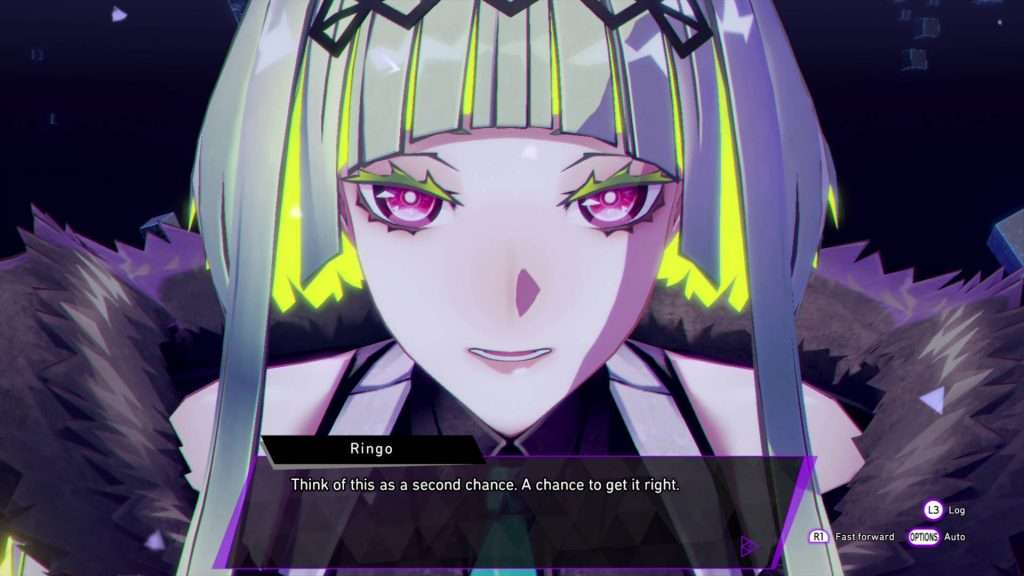 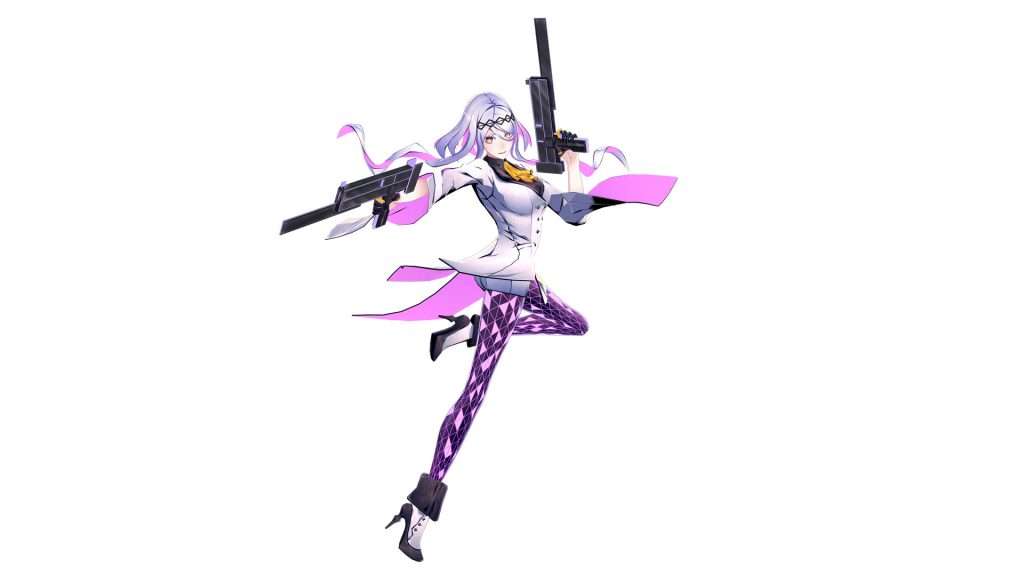 Like Ringo, she is one of Aion’s agents. Cool and thoughtful, she is like a big sister who scolds Ringo for going at her own pace. Figue also has an interest in and an admiration for humans, and she’s very friendly towards them. She is good at analyzing information and provides logistical support. 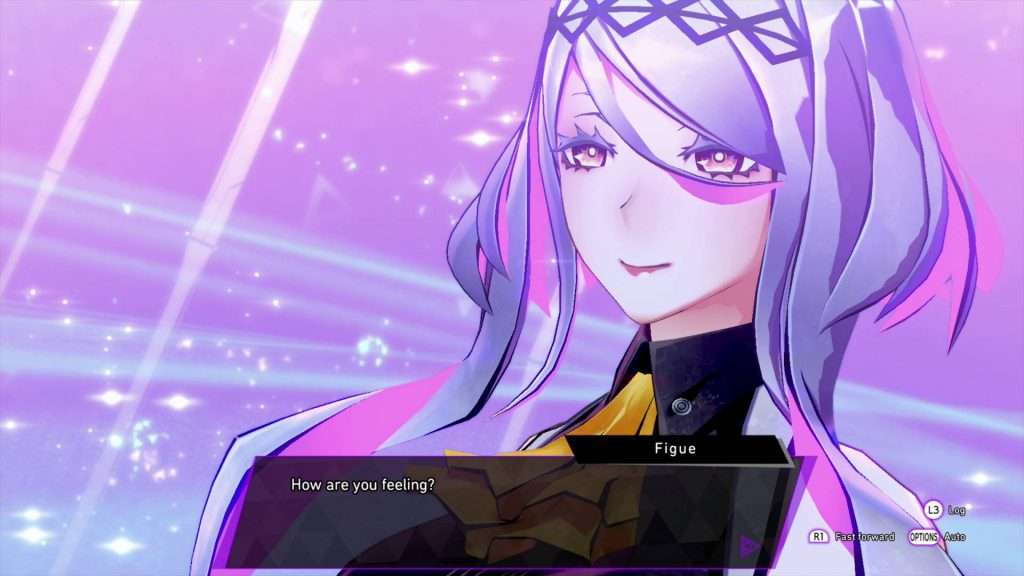 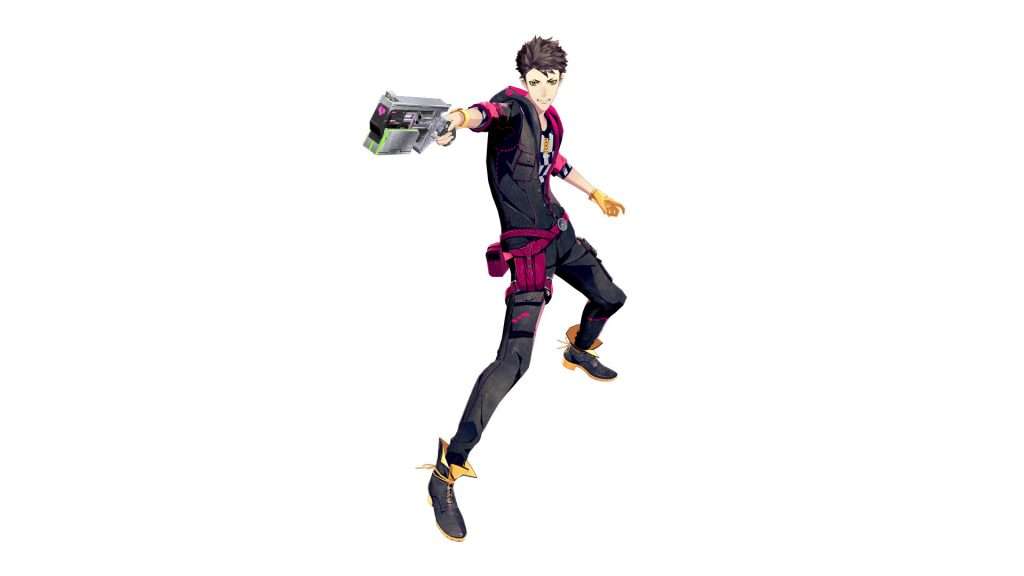 An agent from the Devil Summoner organization Yatagarasu, he is one of the “protected targets to avoid the destruction of the world” detected by Aion. He appears to have been killed during an undercover operation, and is revived by Ringo’s “soul hack.” He is a quiet young man, however he is honest with a lot of passion, placing great importance on morality. Because of this, he often clashes with Milady. 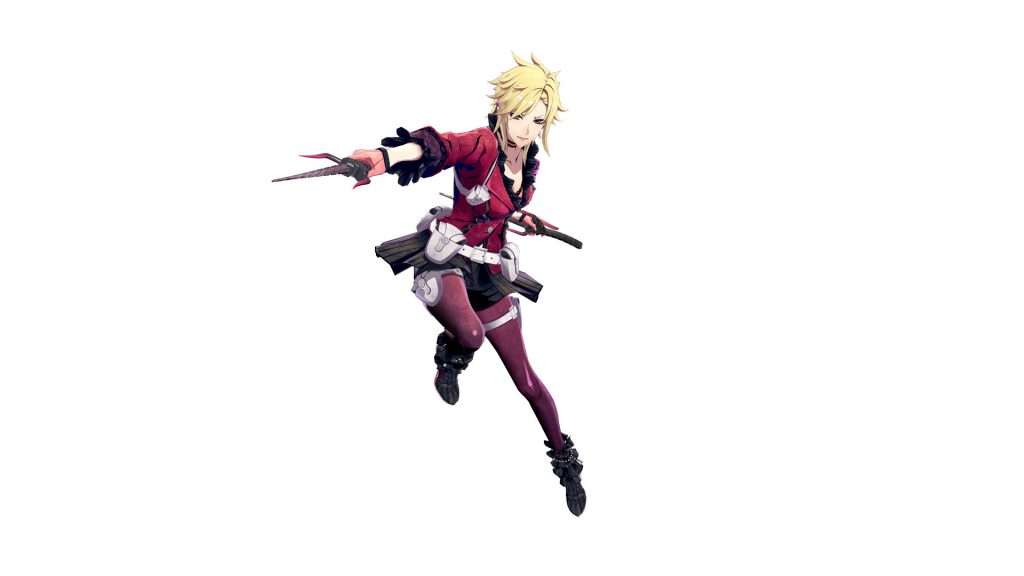 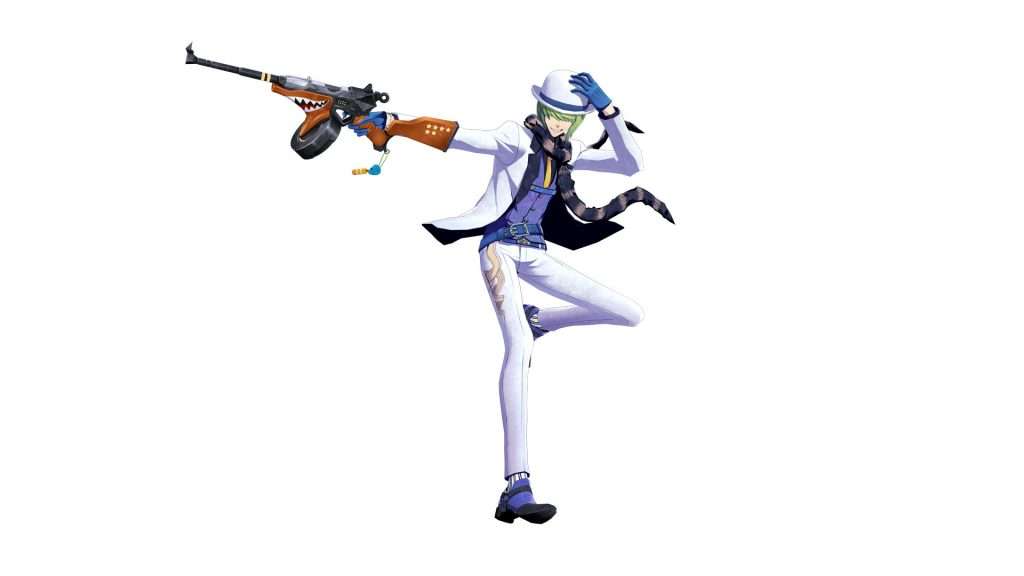 They have a long history existing alongside human society, changing forms depending on the time period and country. They make contracts with demons and use their power to solve problems that go beyond human knowledge. On the other hand, there are also many summoners who use their power for evil, such as assassinations or other crimes.

Devil Summoners also have their own organizations. Ringo and her allies, in their struggle to avoid the end of the world, become involved with two opposing organizations called the Phantom Society and Yatagarsu.

A gadget that assists Devil Summoners in their ability to summon demons. The COMP’s form varies from person to person, and it can be modified to look like someone’s favorite item or ornament. Ringo’s COMP has been improved with Aion technology and it stores demons directly within the COMP itself.

Aion, having detected the end of the world, dispatches beings made into human forms to facilitate their interactions in the human world through Ringo and Figue. They have their own will and are almost biologically equivalent to humans. They are also capable of exercising Aion’s abilities, to a limited extent.

One of the functions Aion has. It’s the ability to intercept and improve one’s soul and mind. Ringo performs a soul hack on a person who had just died, intercepting his or her memories at the time of death. The person’s strong desire to live, brought about by his or her dying regrets, brings about that person’s revival. This function is still a mystery. and Ringo and Figue do not seem to understand all of it.

Spiritual beings that have existed since ancient times, living amongst people. They are not necessarily evil beings: gods and fairies are also collectively called “demons.”

Devil Summoners make contracts with demons, using their power through COMPs. In some places, it is said that there is a secret technique practiced to fuse demons, creating new ones.

When confronting a demon, if you attack in a certain way, such as striking a weak point, you can summon an ally demon. The invoked demon will attack the enemy at Ringo’s command. This is called “sabbath,” and by making use of this system, it is possible to defeat the enemy.

The CIty and Realms

Ringo and her team’s activities take place in the Japanese capital. Within this city where normal people lead their lives lies are secret locations where only Devil Summoners can enter called “Realms.” It is said that Realms are warded off so that ordinary people cannot perceive them.

In the Realms are are many facilities dedicated to Summoners, such as demon fusion, strengthening COMPs, and gathering information.

A dying message was left at the murder scene of a protected target that Figue was pursuing. Figue analyzes the message, left in quantum code that cannot be deciphered by human technology. The only message left behind is “Covenant.” What is the meaning of this message? 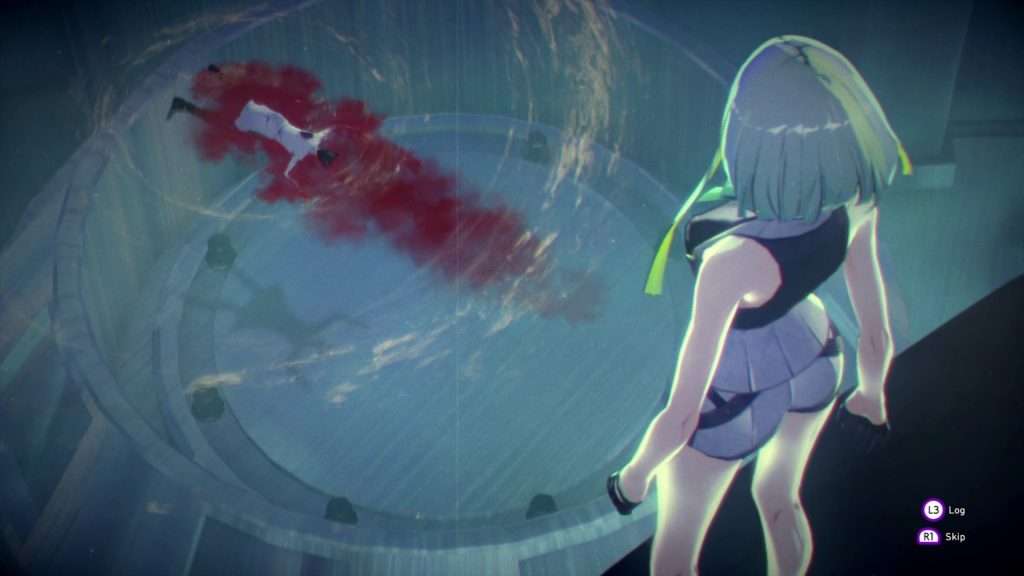