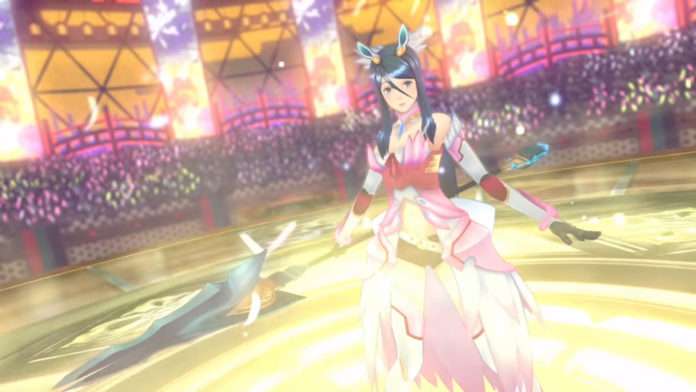 Tokyo Mirage Sessions #FE, the upcoming Wii U exclusive RPG, will be releasing this Friday in North America and in Europe, and reviews for the English version of the game have started being posted. Here are some of them:

It’s been ages since I’ve had as much fun with an RPG as I did with Tokyo Mirage Sessions. Specifically, I can’t remember the last one that was quite so spirited, or that hooked me quite so firmly from start to finish. It revels in the lighthearted and bubbly world of lighthearted and bubbly idols, and that attitude is contagious. Though I went into it skeptical about how well a popstar-themed blend of both the Fire Emblem and Shin Megami Tensei series might work, Tokyo Mirage Sessions never misses a beat.

The colorful world, the characters, the battle system and so much more brings this game together in a major way. I could nag about the loading times and small hub worlds more, but Tokyo Mirage Sessions #FE does too many things well for it to really matter. There are very few RPGs that I wanted to see 100% completed, but darn, I am glad that it is this one. The game is nuts, lives in its own little world and doesn’t take no for an answer. And you know what? That is why I will be playing it again and again in the years to come.

Almost like a diet Persona of sorts, Tokyo Mirage Sessions FE doesn’t feel like Atlus took any half-measures, but by that same token, it doesn’t do anything spectacular either or expand upon its previous work. While folks probably won’t be rushing out to buy a Wii U for it anytime soon, the famed publisher has once again proved that it is at the top of the food chain when it comes to JRPGs.

Tokyo Mirage Sessions #Fe is gorgeous, fun, and a smart collaboration all around. Backtracking through dungeons and running up against tedious bosses can bring the momentum down, but overall the game is something worth exploring. After a few dozen hours the semi-ludicrous story and systems set in front of you feel so comfortable together that this mashup of developer Atlus’ most popular franchise and Intelligent Systems’ beloved strategy RPG seems like it was destined to be.

All in all, Tokyo Mirage Sessions #FE is an RPG that’s roughly 85% Shin Megami Tensei, 15% Fire Emblem, and somehow ends up feeling like something completely separate from either of the two. It strikes a middle ground that’s rooted in the format of many modern role playing titles, boasting an energetic and dynamic combat system all wrapped up in a setting that takes J-Pop cheesiness to astral heights. While it’s so extremely niche that we doubt it’ll convert any nonbelievers in the slightest, there’s a remarkably lengthy and enjoyable experience to be found here for anyone that doesn’t already have stage-fright. Even if the idea of pop-star superheroes is an immediate turn off, a slew of rewarding mechanics might just be enough to pull you back in. Whether you ignore the silliness or embrace it, we’d dare say that any title featuring a rocket-powered cyborg pegasus is worth investigating.

Tokyo Mirage Sessions’ clumsy and often cringe-worthy storyline is a real test of endurance, while the music offers little incentive to continue on your journey either. And, in essence, side stories are just dressed up sandwich filler. With such a promising blend of franchises, Tokyo Mirage Sessions strikes gameplay at the wrong angle, resulting in a bubbling, confusing mess. But ultimately, it’s saving grace is in its visuals, dungeon exploration and superb array of weapons and skills. Chrom, your legacy deserved better.

Genei Ibun Roku #FE had previously received a Dengeki Online Award 2015 in Japan. The Metacritic score for the game is currently at 84 based on 17 critics.

Persona Central will be posting its own review sometime in the future.