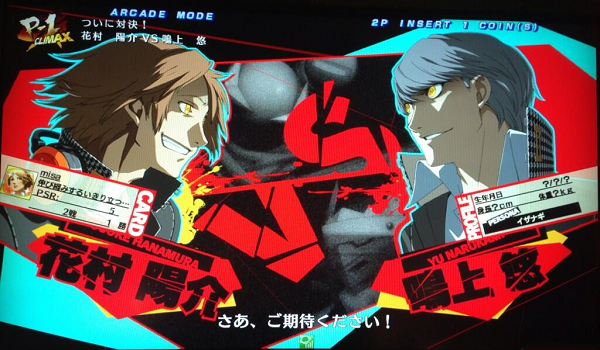 Persona 4 The Ultimax Ultra Suplex Hold received an arcade update one month ago, and the game will receive another on January 16, 2014.

The 1.02 arcade update includes a variety of fixes and a few added features to the game’s newly introduced training mode. Translated via Dustloop:

2. When fighting CPU, holding down all attack buttons plus start button will cause HP and the time counter to decrease at high speed.

4. Shadow Type characters now receive the same amount SP from damage as they do from attacking.

5. There is now a low probability chance of the game picking a different stage for fights.

6. Victory Screen now has an increase in maximum digits for displaying EXP won.

7. Fixed volume issues with some sound effects and voices.

8. Fixed an issue with game progression and data retention related a processing failure.

10. Yukari Takeba:
SB Magaru has been adjusted so that arrows no longer repeatedly bounce off them.
Fixed a bug where sometimes Feather Bomb would explode by itself.

Fixed a bug where sometimes the C-version of Waving would not generate SP.
Fixed display bugs with SB versions of Waving and Ducking.

12. Shadow LAbrys:
Fixed a bug where Public Execution would sometimes restrain the opponent for a longer time.

13. Elizabeth:
Fixed input registration for the B and SB versions of Randomiser.