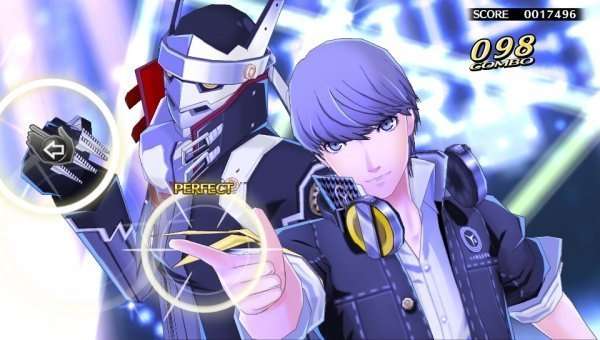 In addition to a number of new gameplay screenshots, Atlus has shared story and character details involving Persona 4: Dancing All Night.

Developed by Hatsune Miku: Project Diva 2nd developer Dingo and Atlus, Persona 4: Dancing All Night will feature an involved story that Atlus has recently shared details on, translated via Gematsu:

The summer after the solving the Yasoinaba case, Rise returned to the city to continue her idol career. But at the time she arrived, a strange urban legend was catching on in the city. At midnight, when you open a certain website, a strange video will play. Those who view the video are taken to “The Other Side,” never to awaken again. With this, the main characters are taken away to that world and discover it is called the “Mayonaka Stage,” and that the junior idol group members at Rise’s office “Kanamin Kitchen” are being held captive there. “We can’t just let this be! We’ve got to help!” Persona 4 protagonist Yu Narukami puts out an SOS to his Investigation Team allies. Together, you’ll invade the Mayonaka Stage and rescue the junior idols.

Persona 4: Dancing All Night is about dancing to defeat Shadows. In addition to Rise, Persona 4 protagonist Yu Narukami and other members of the Investigation Team will also take part in heavy dance battles.

Persona 4: Dancing All Night features over 30 tracks, ranging from newly written music to arranged versions of previous Persona music. Stages and dances are provided for each track, and all of the Investigation Team’s members can perform them. Confirmed tracks include: “Pursuing My True Self,” “Heaven,” “Reach Out to the Truth,” “Time to Make History,” and “True Story.” Popular musicians like Tetsuya Komuro and Daisuke Asakura will be collaborating with Atlus on the game’s music.

Persona 4: Dancing All Night is set for a fall 2014 release for the PlayStation Vita in Japan.