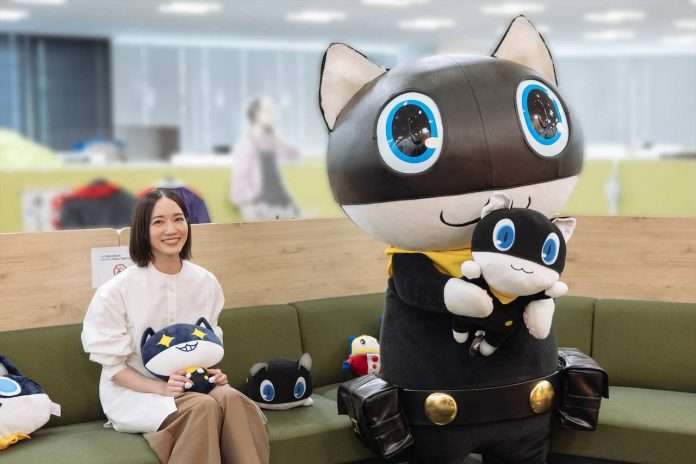 In May 2021, singer and dancer Ayano Omoto (aka Nocchi) from the Japanese electropop group “Perfume” visited the Atlus premises. A fan of video games, she has been meeting various creators in the games industry. This time she went to visit the creators behind the Persona and Shin Megami Tensei series, meeting character designer Shigenori Soejima and composer Shoji Meguro.

A large stuffed animal version of Morgana from Persona 5 welcomes guests at the Atlus entrance, along with a Decarabia model from Shin Megami Tensei. Nocchi, who loves Morgana, decided to pose with the large doll, but suddenly the doll started moving, which took her by surprise.

To Soejima and Meguro’s Workplace

With Morgana as her guide, Nocchi was lead inside the company. She first stopped by the development booths at 2nd Production, which is the team behind the Persona series. 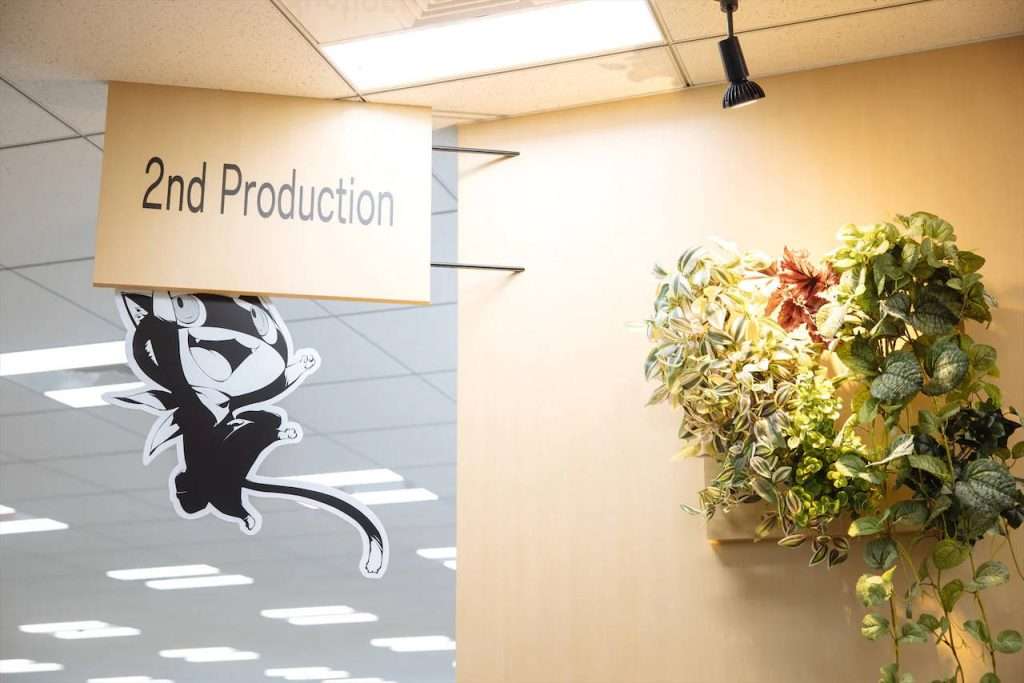 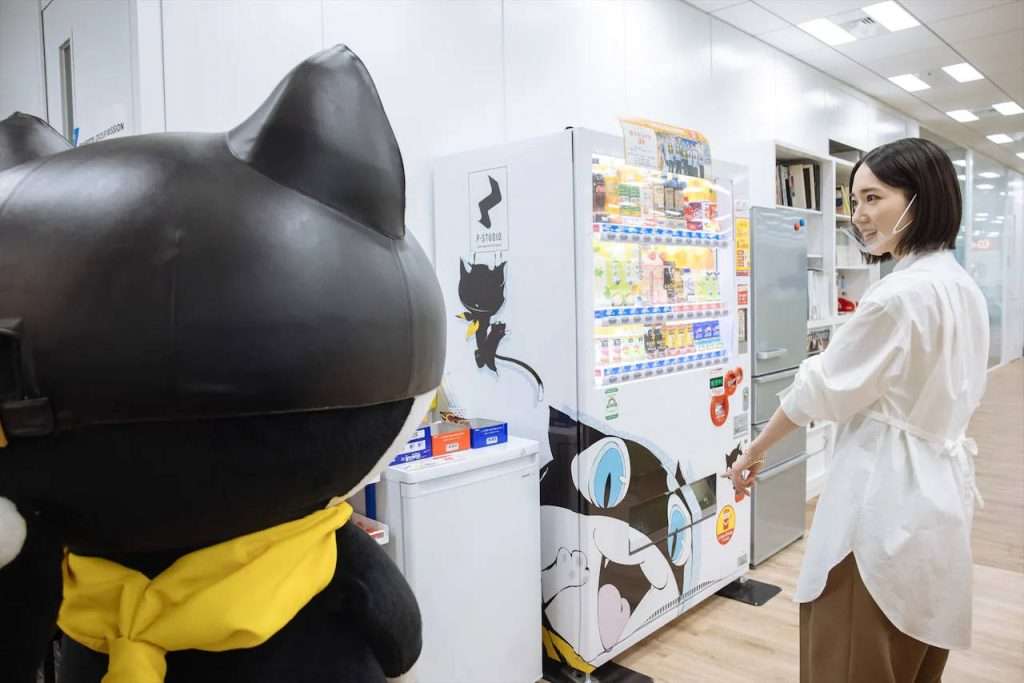 Right next to the vending machines is a monitor installed on a wall to playtest the games, with a sofa where Nocchi sat down and found relaxing. 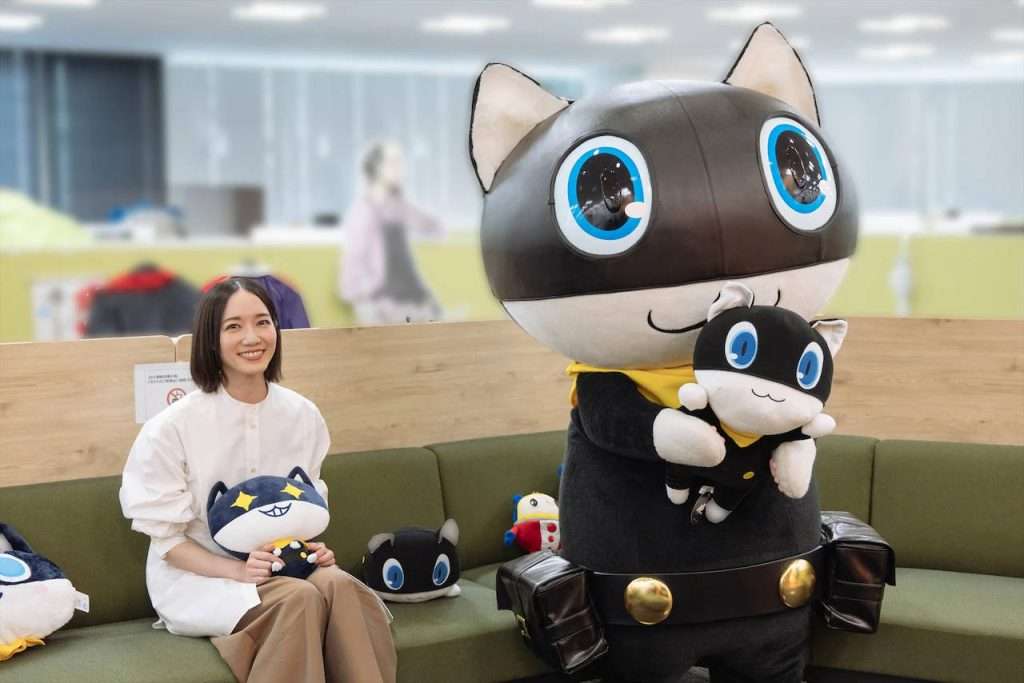 The back shelves are filled with goods from the Persona series, including game scripts and signatures from voice actors.

After proceeding through a large amount of books and figures, Nocchi found herself at character designer Shigenori Soejima’s workspace. It is a large area, and while he’s been increasingly working from home due to the coronavirus, Soejima usually works there. 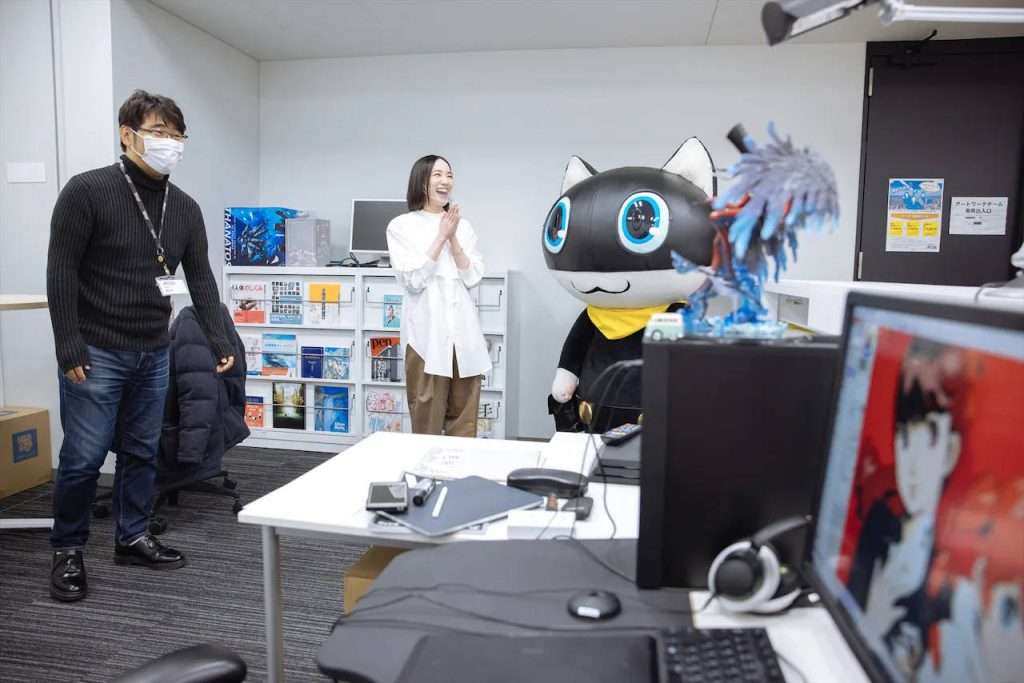 Nocchi then noticed a costume book for Perfume, the group that she is a part of. According to Soejima, this “Perfume Costume Book 2005-2020” was not put on display because Nocchi was coming to visit that day, but it was actually used as a reference for designing costumes for the characters. 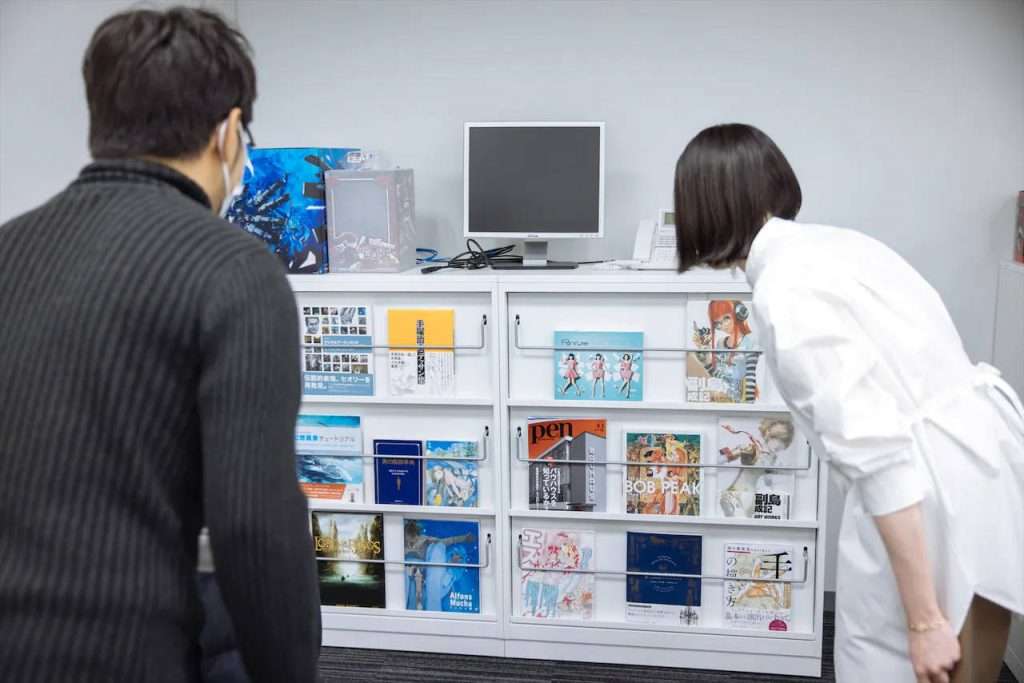 Nocchi excitedly looked around at illustration materials and personal figures around the desk. An example of one of them is a dragon figure in the foreground of the picture below, which was used as a reference for Soejima in the creation of fantasy work. 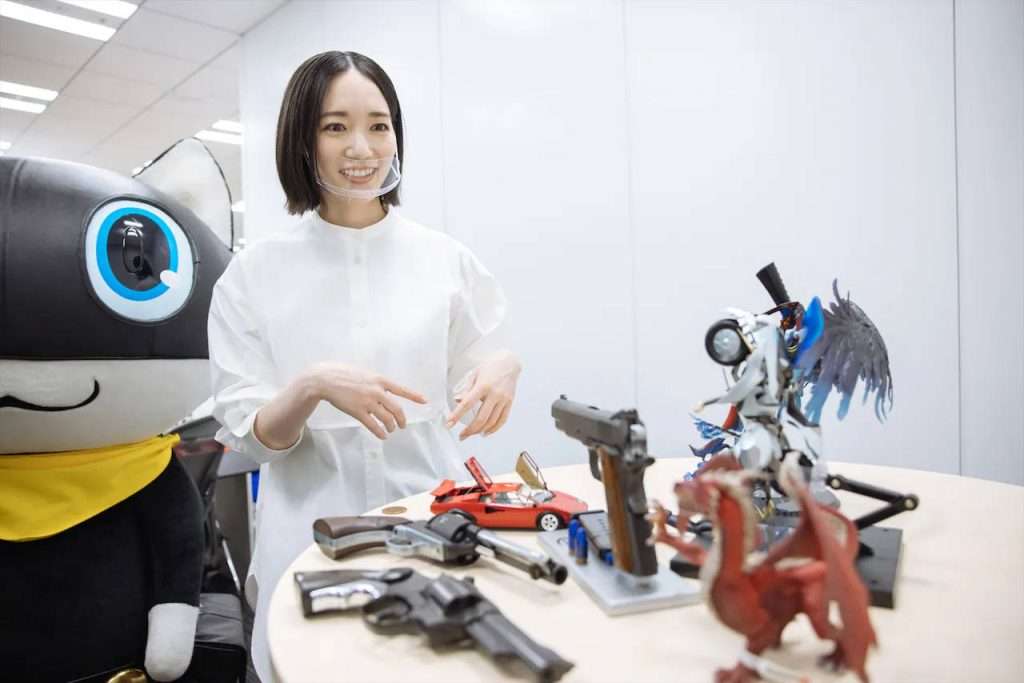 Next up is the sound creator’s work booth. There’s a private room assigned to each creator, and the innermost room is Shoji Meguro’s. 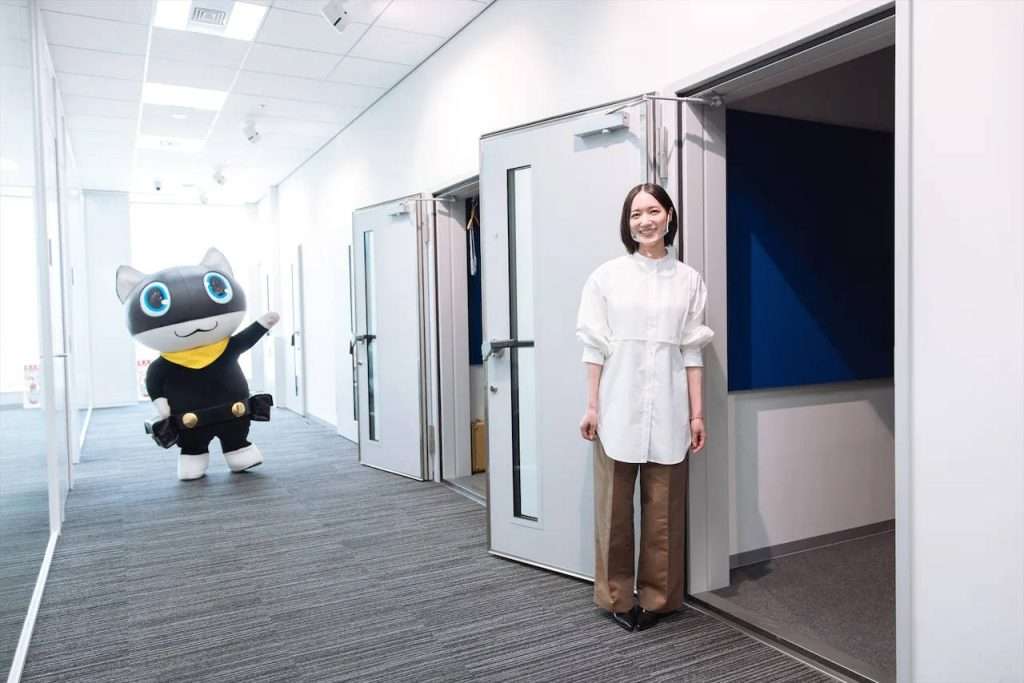 Vocal recording uses an external studio, but aside from that, all recordings including environmental sound recording are done in these rooms. Nocchi remarked that this setup was unlike the recording booths of the companies she had visited thus far, saying it was like a karaoke shop with the private rooms lined up like they are.

Nocchi was surprised when she entered Meguro’s room. With a coffee machine and more, it felt like a room where you could live in instead of simply a music studio. 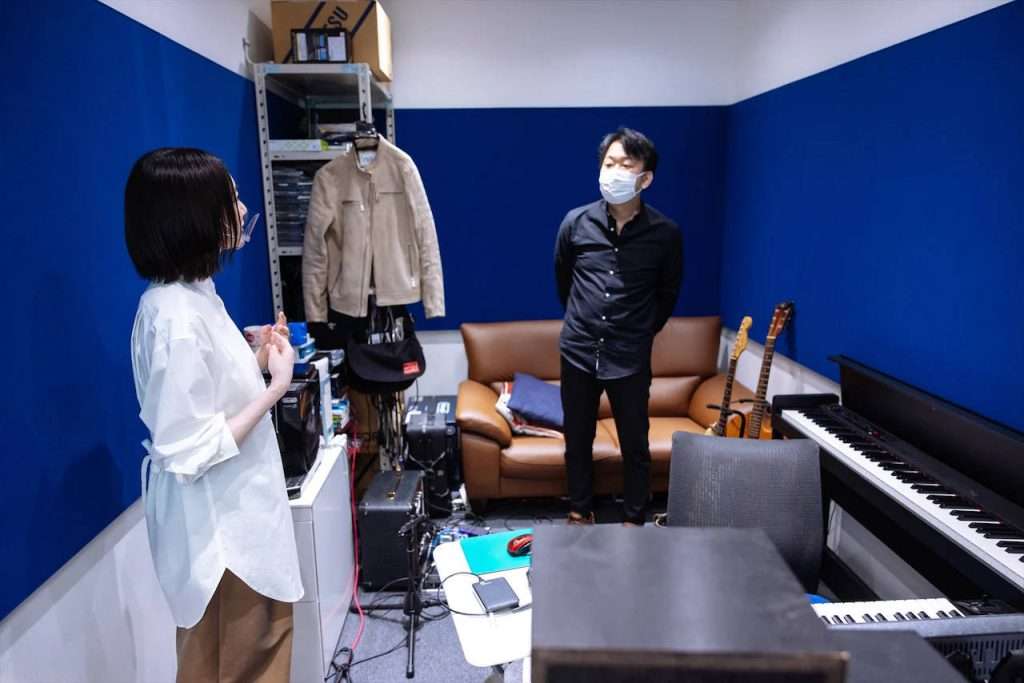 While, like Soejima, Meguro has been working more from home since the coronavirus, he typically spends his days here. Each sound room has its own color, with its own atmosphere, and Meguro explained that everyone has a completely different way of placing their desk.

A PlayStation 4 is connected to a monitor, which Meguro uses to check out the game he’s working on while tweaking the music little by little.

Part 2 of the tour, interviewing Soejima and Meguro about their creative processes, can be found here.