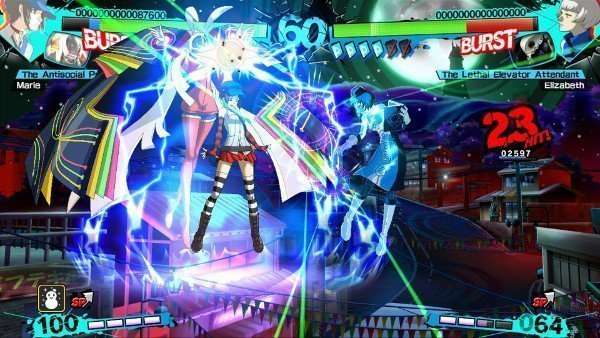 A translated version of the patch notes have been written by Dustloop user Sourenga:

Shadow:
– Burst gauge added, Reversal Burst is usable
– Attack power increased
– HP amounts has been individually changed
– SP gain amount has been adjusted
Shadow Frenzy
– Only usable when Burst gauge is charged (Usable even if you don’t have full SP gauge)
– Unburstable
– Adjusted the amount of SP moves use during the Frenzy
– Activating Frenzy with max SP recovers Persona cards
All-out Attack
– You can hold the button to do the All-out Rush
– Harder to punish on block
Ground Throw
– Is now super cancelable
Auto Combo
– You have to use Auto Combo until Skill-move comes out in order to receive the “Bonus”.
Some Persona-attacks
– In most of the C-moves, Persona is invincible during the start-up of the move (Until they actually appear on the screen)
S-Hold System
– Only usable in single-player modes
Ailments
– System message is now displayed when you get hit by an Ailment
– In Confusion, you now block whether you hold the lever forward or backward
– In Spinning, the latter half where you can only guard has been removed
– In Freeze, you can press buttons to free yourself
Colors
– Some set-up items now change color for P1 and P2 (Teddie, Yukari, Rise, Marie)
YU:
– SP Heroic Bravery is now a strike move
– D Ziodyne has faster start-up and a greatly reduced recovery
– Zio’s performance has been changed. D-version is a fast projectile and the old D is now the SB version
YOSUKE:
– After you use Moon Assault three times, you can continue with Kunai or V-Slash
– Landing recovery from Crescent Cut has been decreased
– Mirage Slash’s invincibility starts faster, recovery also decreased
CHIE:
– 2C faster start-up, faster recovery
– Herculean Strike has faster start-up, harder to punish on block, SP-version has added projectile invincibility
– Effect of Power Charge is now show in numbers (?) than in a time-restriction.
YUKIKO:
– Jump B landing recovery decreased
– B-version Flame Dance has faster start-up, can be combo’d from C-attacks
– All Skills can be cancelled with Phoenix Flame Swirl on hit.
KANJI:
– SB Added Cruel Attack is now One More Cancelable and Super Cancelable
– j.C have faster start-up, decreased landing recovery
– 5C hitbox increased from before Kanji, increased reach
TEDDIE:
– j.2C can be used near the ground, P-Combo Route added so it can be cancelled from j.B
– You can now use D-moves during the cooldown from Mystery Teddie SP
– D Teddie Warp has hitbox for where Teddie comes out
NAOTO:
– Switching between versions of “Snipe” is faster. Final Bullet from C-version is ricochet
– D-version Venom Zapper has faster start-up, combo can now be continued from it
– 2C is cancelable on block
MITSURU
– Coup Droit B and SB versions  have faster start-up
– Charged 2B, rises the opponent into midair on hit
– Tentarafoo has faster start-up, can be combo’d from some moves
AKIHIKO:
– The opponent isn’t forced to start when hit by Kill Rush
– Double Upper is now faster depending on your Cyclone Level
– If you use Hop or D-moves, you won’t lose your Cyclone Level and can continue with Boomerang Hook and others…
AIGIS:
– When you use Vulcan Cannon, you can hold the button to land on the ground
– Second half of Air Boost can now be cancelled with normals or Skills
– In Orgia Mode, 2A, 5B and Sweep are jump cancelable
ELIZABETH:
– Mabufudyne has faster recovery, A-version is now Super cancelable
– Mahamaon has faster start-up and can KO only under specific conditions
– Diarahan now has a hitbox and hits the opponent
LABRYS:
– Standard Axe Level is now Green. It’s harder to get a high Axe Level to decrease
– When you counter opponent’s move with Axe Slash its start-up will be faster, it’s also harder to punish on block
– C or SB Weaver’s Art: Beast increases Axe Level on hit
SHADOW LABRYS:
– Buffalon Hammer has faster start-up, Asterios’ endurance value has been increased
– Hammer Upper’s (8C/j.8C) start-up is now a lot faster
– Chain Knuckle has faster start-up, decreased recovery
YUKARI:

– Arrows from “Feather Arrow” now fly a lot faster and can be reflected from Magaru
– Faster start-up on B-moves
– 6D now makes Persona to appear far away from Yukari
JUNPEI:
– Aerial C Full Speed Slide is now a low, Aerial D & SB versions are overhead+low
– You no longer get one “Out” if the opponent techs from your throw
– 5A, 5B, 2B, j.2A, j.2D have faster start-ups
SHO:
– You can now follow Dodge action with an attack (C or D button)
– Soaring Fang is now usable in midair
– Height of each Survival Knife has been adjusted, low knife is now actually a low attack
MINAZUKI:
– C & SB Dream Fog now causes super flash when the move is successful. D-version is now a strike move
– Recovery of his D-moves has been decreased, Charged versions are now a little safer
– Destructive Fang is now safer on block
RISE:
– B ROCK YOU’s music note’s trajectory can be changed by holding the button, notes now moves forward as they burst
– Tetrakarn and Makarakarn have decreased recovery, added projectile invincibility (SB also has strike invincibility)
– 2B second hit now has head-invincibility
KEN:
– Vile Assault has faster start-up, decreased recovery
– Mediarama now has a hitbox and it hits the opponent
– Now you need to hold D to have Koromaru exit from the screen
– Koromaru now executes his attacks when you release the C-button (Doesn’t work with Skills)
ADACHI:
– Evil Smile has faster recovery, SB-version hits crouchers
– Latter half of Scared? can be cancelled with Skills
– Magatsu Mandala status boost changed, after you use it Adachi’s SP Skills leave 2 Ailments on the opponent.
MARIE:
– Greatly increased reach on 5C
– “Fallen Angels” (Chocolate) and “Memories of Grief” (Cloud) have faster start-up, decreased recovery on SB-versions
– Run Amok SB-version has faster start-up, can be combo’d now
MARGARET:
– In “God Hand” Persona is invincible until the start-up
– During “Mediarahan” Margaret can take attacks from the opponent, increased HP-recovery when taken hits
– You can now delay his Sweep by holding the button

These patch notes for version 2.00 are likely not complete as they only list character buffs, along with certain system level changes. Additionally, because they are for the location test, it is likely that there will be changes from them before the official release of the updated version in January 2015.
— Arc System Works via Dustloop