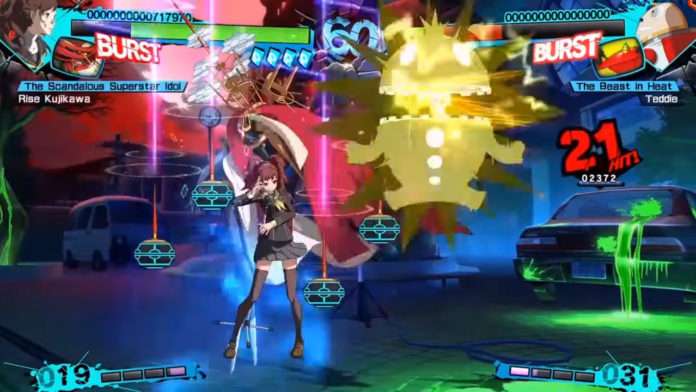 4Gamer recently held a fighting game developer round table with various “battle planners,” with two of the members having worked on the Persona 4 Arena series.

In order to create such fighting games, someone must fulfill the role of “battle planner”. Battle planners decide the game system and battle concept, and occasionally must conduct community discussions on game balance. They play an important role and share an intimate relationship with fighting game players. How do these battle planners normally think and approach their job?

In the round table, Persona 4 Arena Ultimax is discussed with commentary on its development process. Some excerpts:

MM1: P4U is based on an RPG, and originally the characters all can fight, so it really wasn’t a burden [to adjust the game]. The status already have a setting, so in principle we follow the original story when we put the battle design in order.

MM2: In P4U when we added Kujikawa Rise, we held a very detailed meeting with Arc. For a character that originally did not fight to join the battle, it was crucial to not destroy the image of the character in the original work, yet add a “punch line”, as Kamone-san mentioned.

Pachi: Speaking of which, who was behind the idea of Margaret’s Suplex?

MM1: I didn’t just do it arbitrarily! When I asked for permission “Can we give Margaret perform the suplex?”, I made sure to get an “ok” reply. It was just right.

Pachi: I have no idea what you mean exactly by “just right.” (laughs).

MM1: Well since the word “suplex” is in the title, we had to give someone a suplex, right? Margaret is constantly doing off the wall things in the story, so it was entirely plausible. The original story and the character image have to conform with another, so inevitably it’s a difficult situation.

The full round table interview with the fighting game developers can be found on the English translated 4Gamer article.