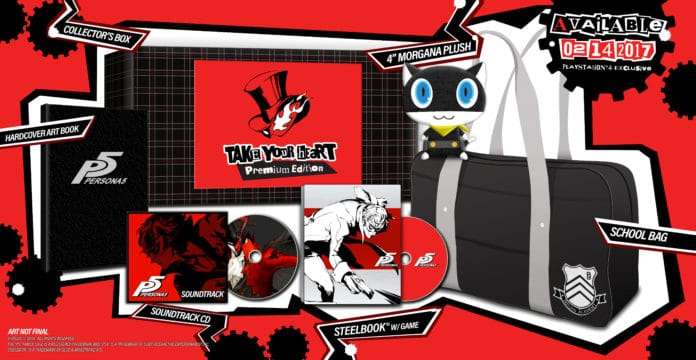 Following yesterday’s information regarding Atlus’ plans for Persona 5 at E3 2016, it has been announced that the game will be delayed in North America to February 14, 2017 (Valentine’s Day) from the previous 2016 window.

Similar to the Japanese collector’s edition of the game, North America will be receiving the “Take Your Heart” limited edition, detailed below. 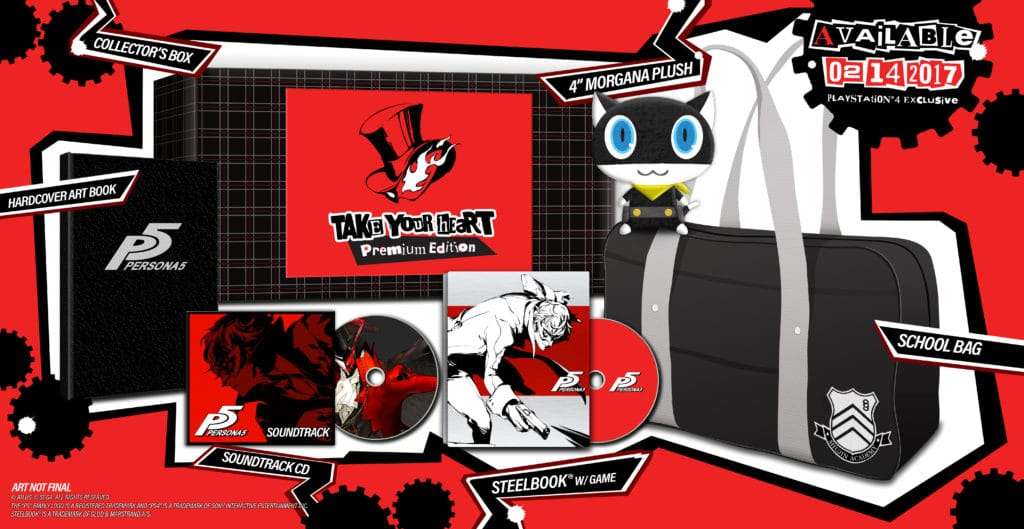 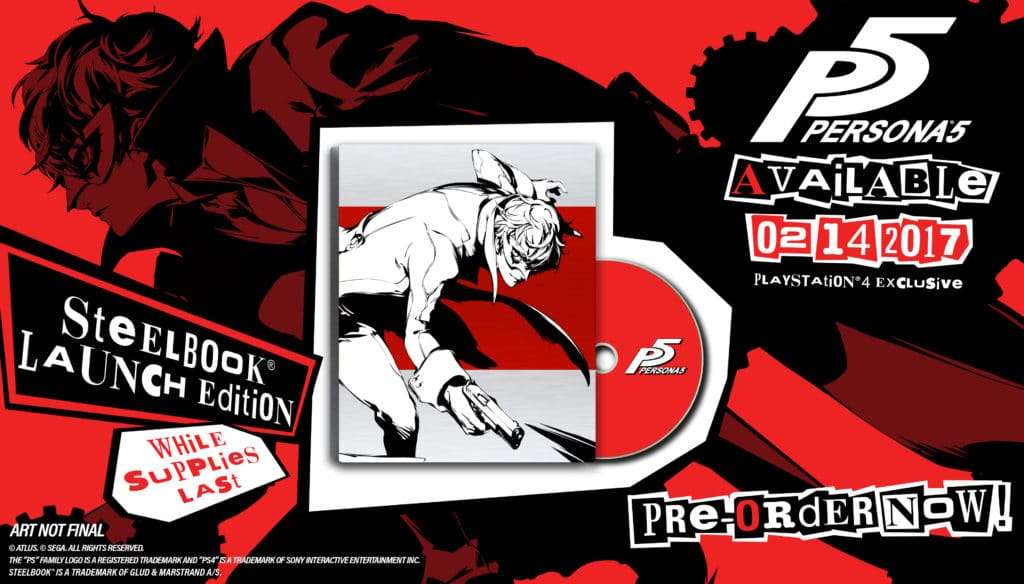 IRVINE, Calif. – June 7, 2016 – The jig is up for the Phantom Thieves on February 14, 2017, when the next numbered entry in the award-winning Persona series makes its debut in the Americas. ATLUS’ Persona Japanese role-playing game series will be released exclusively on the PlayStation 4 and PlayStation 3 consoles, and is available to pre-order now.  Besides the PS3 game there will be a special PS4 SteelBook® Launch Edition as well as a limited “Take Your Heart” Premium Edition. Find out more details here: atlus.com/persona5.

The details of the two limited PS4 editions of the games are:

Available only to PS4 pre-orders and a limited number of day-one purchases, while supplies last.

Persona 5 is a game about the internal and external conflicts of a group of troubled high school students – the protagonist and a collection of compatriots he meets in the game’s story – who live dual lives as Phantom Thieves. They have the typically ordinary day-to-day of a Tokyo high schooler: attending class, after-school activities, and part-time jobs. But they also undertake fantastical adventures by using otherworldly powers to enter the hearts of people. Their power comes from the Persona, the Jungian concept of the “self”; the game’s heroes realize that society forces people to wear masks to protect their inner vulnerabilities, and by literally ripping off their protective mask and confronting their inner selves do the heroes awaken their inner power, and using it to help those in need. Ultimately, the group of Phantom Thieves seeks to change their day-to-day world to match their perception and see through the masks modern society wears.

Persona 5 will release on Feb. 14, 2017 in the Americas, for PlayStation 4 and PlayStation 3. Pre-orders are now available at participating retailers. The game is not yet rated by the ESRB. For more information, please visit the official website, atlus.com/persona5

The reason for the delay Atlus gives or the delay, from the PlayStation Blog:

Now, even after all that, if you still are thinking: “Why 2017!? You promised us 2015, and then 2016! Now it’s 2017?!!!?!” Well, the biggest factor in the 2017 release date is attention to detail. When we show off Persona 5 footage at E3 next week (Next week!), I think you’ll understand what we mean. We’re making sure every bit is in place. Persona has exponentially grown as a franchise, and considering that this is our first numbered sequel since 2008, ATLUS is taking its time to ensure this is the best possible experience.

For those asking about the P5 DLC stuff included in the JP CE, right now, it's not included for NA. But will be addressed later.

Pre-orders are now available on Amazon US at the following links:

The official English website for Persona 5 has been updated with a pre-order page.