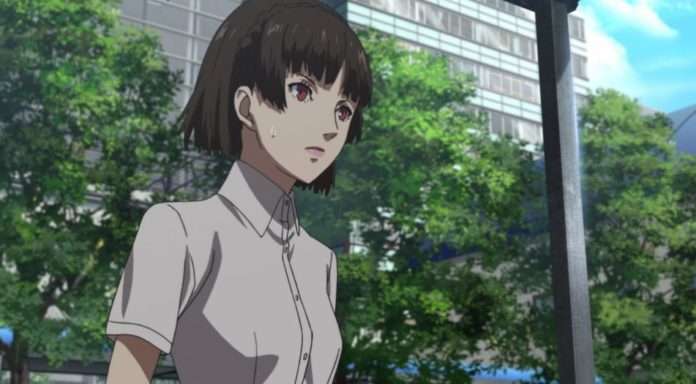 After last week’s stellar episode, it’s a little disappointing to see episode 10 attempt a more straightforward adaptation of the game’s events. There’s very little innovation to be found here, unlike in the previous episodes, but even that by itself would have been fine if the episode didn’t disappoint in other ways. To start, there’s the way the anime handles Makoto tailing Ren. It’s a clear callback to what happens in the game, but the anime doesn’t make good use of it at all. It frames it in a serious way (which is accompanied by tense music) but that… wasn’t the point of the gag at all.

In the game, she’s stalking Ren in an exaggerated manner, with a book covering her face. Persona 5 exploits this for all it’s worth via her awkward body language, her over the top facial expression… It’s a goofy scene. The anime’s decision to insert that gag into a serious scene just doesn’t work out. The TV station sequence fairs a little better, with Goro Akechi’s confrontation with Ren being a high point. The anime has been teasing a confrontation for a while now, and it’s good to see them actively enhance Ren’s rivalry with Goro with that back and forth. 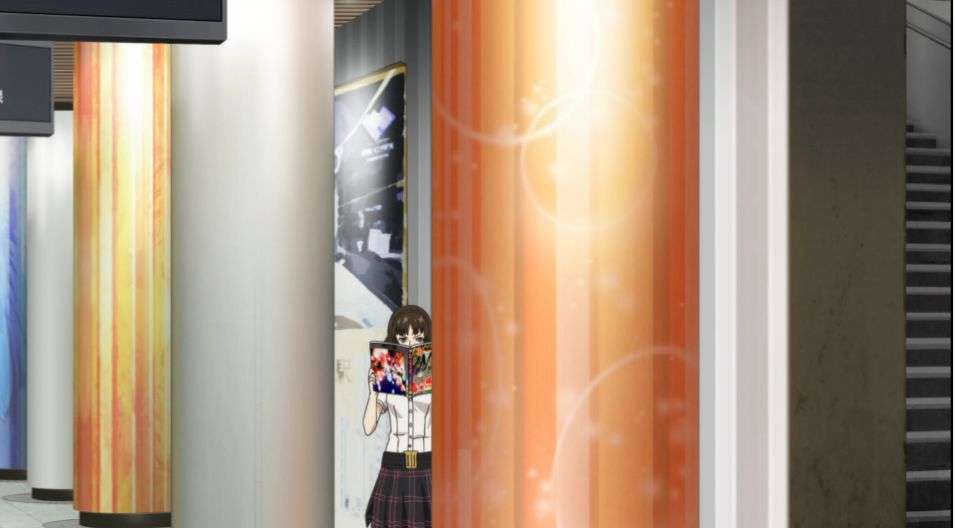 Unfortunately, the anime doesn’t set up Makoto’s arc nearly as well as Yusuke’s. Societal expectations and intense pressure are huge parts of her character, but the anime doesn’t really hone in on that. Things go by a little too quickly, with a brief chat from the principal tasking her with finding the Phantom Thieves, to Makoto immediately resolving to taking on Kaneshiro. The transition is abrupt here, and I wish they took the time to set her character up better. Sure it’d take time, but something as crucial as the setup to her entire arc deserves it.

Makoto as a character is still pretty good; she comes across as cool person here, what with her blackmailing the Phantom Thieves and bold attempts at trying to stop Kaneshiro. But there’s something missing. The game really hammers in how… miserable Makoto is, between being tasked with an impossible mission, taking verbal abuse from her sister (a scene that I hope eventually makes it in), to even being chewed out by the Phantom Thieves themselves. None of that is really present here. 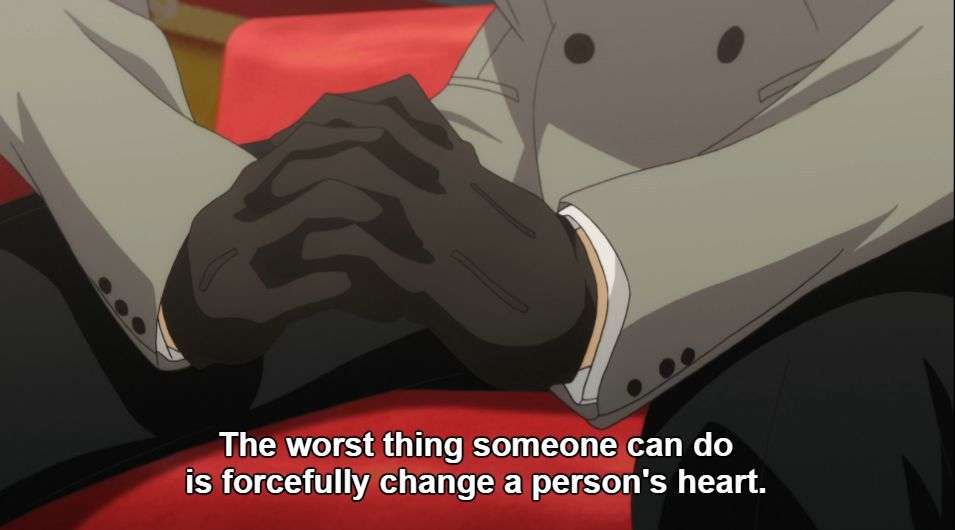 On the upside, the sequence in which the Phantom Thieves are “caught” by Makoto is a bit better here, instead of it just being limited to Ryuji and Ann messing up, they’re all at fault here (which ties into. Morgana telling them to be careful). Unfortunately… more cuts! The anime removes sequences like the Phantom Thieves interacting with Kaneshiro’s victims, which is a big mistake. It’s difficult to get invested in this arc if the stakes aren’t properly set up, and it commits the sin of telling us about something instead of showing it.

That’s not the worst of it, however. The worst part is when the Phantom Thieves do a bit of legwork to get information in Shinjuku. Anyone who’s played the game is aware of the infamously homophobic sequence in which Ryuji is sexually accosted by two of the worst gay stereotypes in gaming. I was hoping the anime would take the high road by omitting them altogether (and it would have been in their best interest, considering it’s a general time waster), but the anime doesn’t bother and in some ways, actively makes the sequence even worse. 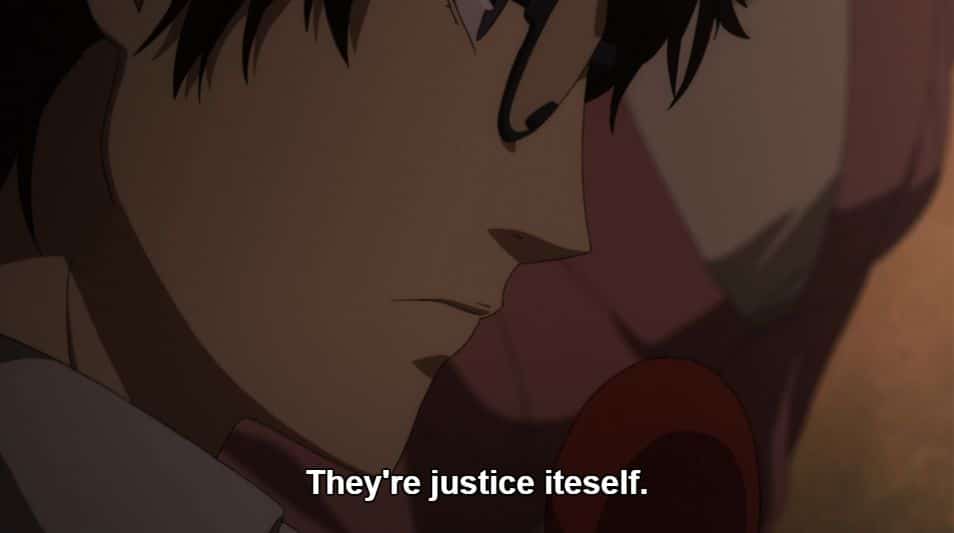 Like where do I even start here? For one, there’s Chihaya’s comment about Ryuji having impending “girl” troubles, which is just a blatant conflation of homosexuality and transgenderism. There’s Ren just leaving Ryuji to fend for himself when the crux of his character is helping people in need. And there’s the sexual harassment thrown Ryuji’s way when you consider the first arc… it’s not a good look all around. Persona 5 has had a problem with homophobia in the past, and the anime was the perfect chance to move past that. 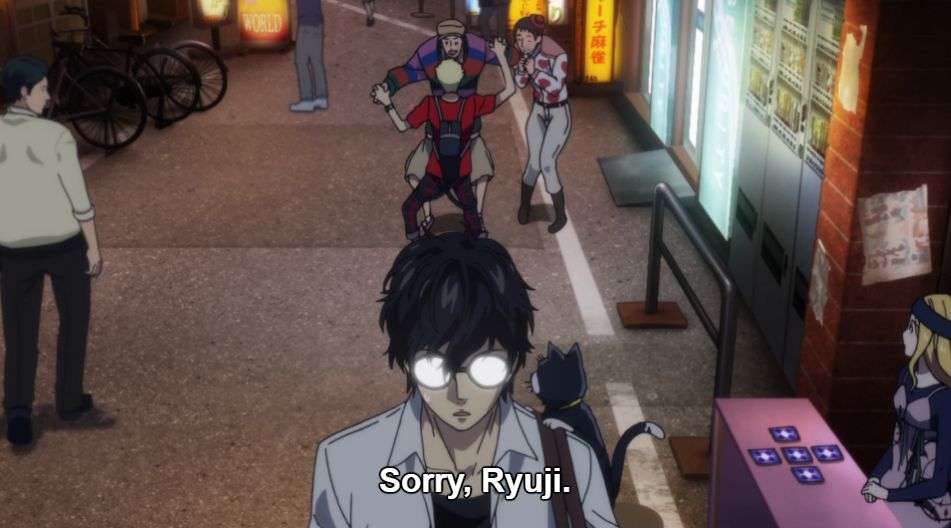 But the show decides to disparage sexual minorities, despite being a story that’s literally about misfits rising against the people in power. I shouldn’t have to say why this is so unpleasant. With all of that in mind, the episode was more disappointing than bad, and the episode’s title—”I want to see justice with my own eyes”—ends up being pretty apt, but not for its intended purpose. Seriously Atlus, where’s the justice?