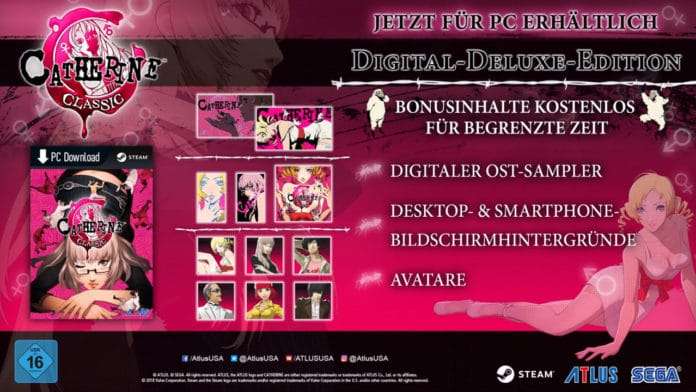 Following the sheep related teases Sega Europe made beginning last week, Catherine Classic has been officially announced through an ESRB listing and an official trailer:

The game is a re-release of the original Catherine released for the PS3 and Xbox 360 in 2011. It is different than Catherine: Full Body, a remake of the original game with new gameplay and story elements, set for release on the PS4 and PS Vita in Japan next month,

The trailer states that the game will be available for download today via Steam. The “Digital Deluxe Edition” download, available only for a limited time, will include

A Choice to Make

Vincent’s heart is torn between two women. On one side sits Katherine, the girl who intends to wed Vincent someday. On the other, Catherine, who appeared out of nowhere. Both of them pull at his heart and soul… The story can take many paths, and the outcome of this romantic horror tale can go to unimaginable places.

Move the blocks to create a path and climb a nightmarish tower while fleeing from the monsters chasing you. The lowest levels of blocks fall as time passes. If you’re not constantly moving, you’ll fall with them. There’s no time to waste!

The setting changes each night, rising higher and higher into the heavens. The more stages Vincent overcomes, the more complex the strategies required to progress will become.

Various obstacles impede Vincent’s path. Some blocks are traps, waiting to skewer unwary climbers. Others explode, damaging everything around them. The sheep in the nightmare are desperate to survive until morning, too. They’ll get in your way, mess up your blocks, or even try to shove you off. You’ll need your wits and the help of strange items that can deal with the sheep, remove hazards or create new paths if you want to reach the top!

Play through Vincent’s twisting story of love, lust, and self-determination in Golden Playhouse.
Take on the tower’s challenges for high scores, single player or local co-op, in Babel.
Face other players in local multiplayer to determine who is the better climber in Colosseum.

Is love over? Climb to the top or die trying.

The official English website for Catherine has been updated to include Catherine Classic and Catherine: Full Body.