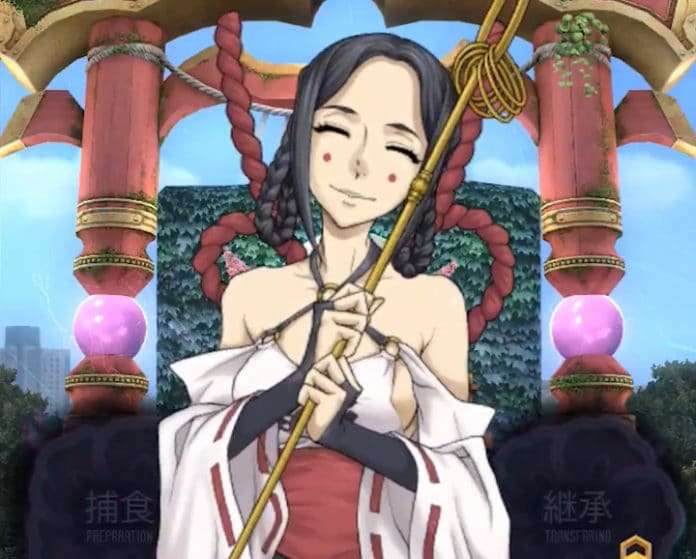 Details for important support characters in Dx2 Shin Megami Tensei: Liberation have been released, following the profiles for the “Liberators” characters (the protagonists).

Leader of the “Church of the False God,” (the location to perform demon fusion). He is a specialist in demon fusion who works at the Liberators’ headquarters, where he lends fusion support in the underground hideout of the Japan branch.

Leader of the “Myriad Demon Shrine” (the location to train demons). To support the Liberators, she performs training rituals on the rooftop garden of the hideout. She is actually a descendant of the shaman Himiko, and she is well versed in the way of demons.

A maid who manages the hideout. She also serves as the head of the “summoning location” where demons can be summoned. She enjoys literature, with Yukio Mishima and Haruki Murakami being among her favorites.

Supervisor of the “Aura Gate,” a space to another dimension. She is a Taoist researcher, familiar with feng shui and dragons. She is a Kung-fu movie enthusiast who likes Chinese culture. As such, she has preferences like wearing Chinese dresses.

A butler who manages the hideout. He also serves as the owner of the “shop” that sells items to support the Liberators. He is also a historian and a folklorist.

A mysterious old man who appears in front of the hero who receives their app. He is actually the founder of the Liberators, acting as the general manager. He always maintains contact through the smartphone’s messaging system and never reveals his actual appearance to the members of the Liberators.